Keneca Pingue-Giles is pursuing her masters in public policy and administration while leading a record-breaking women's basketball program.

This year, everything is timed. The clock ticks at practice, right down to the second. “Fifty-five seconds for water,” says Carly Clarke, head coach of the Ryerson women’s basketball team.

“Everything we do, there’s a science background to it,” Clarke said in an interview. “Our water breaks are timed to simulate a quarter break or a timeout, so we’re stopping, starting like I would in a game.”

Silvana Jez, Mariah Nunes and Keneca Pingue-Giles are three of the team’s four top scorers, and they are all going into their final season of eligibility with the Rams.

Whether the drill is focusing on defence, breaking the press or simulating five-on-five action, time is of the essence.

Last year, the Rams had their best season to date, going 16-3 and finishing first in the OUA east division. The team also won an OUA silver medal and made it to the CIS Final 8, which are both firsts for the program.

“This is a team that, prior to last year, has never really been that successful in the CIS,” assistant coach Kareem Griffin said.

Prior to this year’s season, Pingue-Giles had a decision to make.

Last season she was named an OUA first-team all-star and was the team’s MVP, but she graduated from Ryerson’s criminology program in four years, meaning that she has a final year of eligibility on the table.

She said that she’s wanted to attend law school ever since she was young. Over the summer, she was accepted into Windsor’s law program, the same school that won gold and beat Ryerson in the OUA finals last year.

Pingue-Giles said the experience of choosing where her final season would be played was a stressful one.

“[Windsor is a] really great team, with potential to win a championship there as well,” Pingue-Giles said. Instead, she decided to return to Ryerson to pursue her masters. “Law school is law school, and it’ll always be there,” she said.

In her final year, she’s now the face of the Ryerson Rams. Pingue-Giles has recently replaced men’s basketball star Jahmal Jones as the school’s newest poster athlete, with a massive banner of her draping inside the Mattamy Athletic Centre’s (MAC) main atrium. Pingue-Giles said she doesn’t feel the pressure of being the face of her school’s athletic department, but she does see the recognition as the “greatest compliment.”

Pingue-Giles also enjoys the opportunity that comes with her and the women’s team being recognized — a chance to influence other women to make an impact on campus. Pingue-Giles also notes that it was the community surrounding Ryerson as a whole that influenced her decision to come back for one last season. 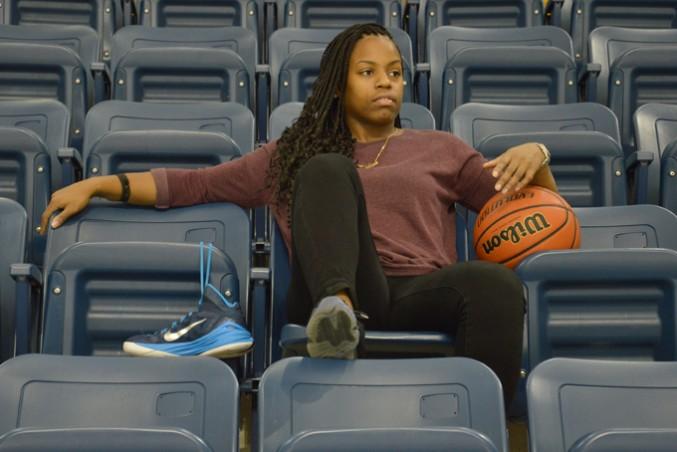 “It’s good for the other girls who come to the MAC and see that and think, ‘Hey, look at this girl,’” Pingue-Giles said. “Now that we have that experience, that sort of taste of how close we were to achieving that banner … we’re hungry. We want to be the pinnacle of not only Ryerson athletics, but Ryerson University, that would be truly history.”

At the start and end of practice, the team does what they call “locking up.” At centre court, they stand in a circle with their feet touching and they talk — something that Clarke got from hall of fame coach Pat Summit.

Second-year forward Sofia Paska said that the team’s strength is their offence, which is, “great from every point.” But she thinks that the team’s defence will be the critical factor for the year. “[It] needs to be a little better.”

When Pingue-Giles leaves at the end of the season, the Rams will have a big hole to fill — a hole Pingue-Giles believes Paska could step into, performing immediately. Finishing second on the team in scoring with 201 points last season, Paska was named to to the OUA rookie all-star team and will take on a stronger leadership role as the team starts this season.

Griffin said that the team has made major strides off the court as well. Last year, they had the highest GPA of any Ryerson team, a complete 180 from two seasons ago when the program had the worst academic record at the school.

“These girls are motivated and ready to go,” he said.

This year the team will have the task of performing up to last year’s standards. As Pingue-Giles goes into her final season as a Ram she’s confident her team, that set multiple records only a year ago, can do it again.

With law school and a bright future on the horizon, the ability to give everything she has one last time, for a community she loves, is something Pingue-Giles truly cherishes.

“I wasn’t sure if I was going to come back, but then I decided to do my masters,” Pingue-Giles said. “Where else would I rather play than my home?”