Reignite Ryerson released an open letter with a list of demands of Ryerson administration on Thursday, addressing freezing or lowering tuition fees ahead of the Board of Governors finance committee meeting.

Reignite, an oppositional group to the Ryerson Students’ Union (RSU) created with the purpose of fighting for a tuition-fee freeze, wrote that they want to work in solidarity with the university to tackle the issue.

“We, the students of Ryerson, have seen in recent years the ways in which accessible education implementation based on a funding formula that is not sustainable, [or] equitable,” the statement read.

The five demands listed include releasing a statement to justify the increase in tuition fees (past the rate of inflation) over the past few years and working on a funding formula that reflects the struggles of marginalized students on campus.

Reignite hopes that this newest release will provoke communication from the school’s administration.

“With the upcoming Board of Governors meeting, we thought it would be a good time to address the university directly with our concerns and demands,” said Casandra Fullwood, a second year arts and contemporary studies student who has recently joined Reignite’s cause. “We have not yet heard from the university. We hope this changes.” 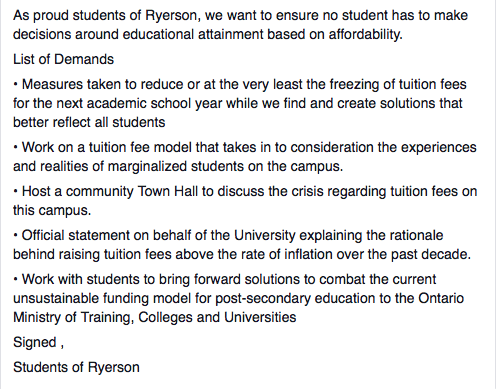 RSU vice-president education Cormac McGee said the letter adopts the tone and goals he’s been working on during his term in office.

“[Goals like] finding sustainable solutions, building reputation … one of the demands is work with the students to combat the current unsustainable model. That’s exactly what I’m doing,” he said. “Whoever writes this has been paying attention to what I’ve been trying to do and for some reason I guess is trying to subvert me and get to the same goals.”

McGee said his reaction to the letter is positive but that he doesn’t “see why they wouldn’t go to a student rep” at the RSU.

“This falls under the priorities that I’ve set as VP education so I don’t see why we shouldn’t work on these things,” he said, adding that he’s organizing a town hall meeting to address tuition fees.