The film “Love Stinks” is a thesis film by two fourth-year film students aiming to address the taboo topics of girlhood.

Alicia Harris, the writer and director of the film works with children and said the inspiration for her film came about when one day three young boys were huddled around a textbook with an image of the naked body on it. They were fascinated by it which sparked her inspiration. Initially, Alicia had planned to write her film about three boys.

“I realized there was a problem with that natural instinct that it would be about boys,” Harris said. “So I changed it to three girls. This behaviour is so normal and accepted for boys and I think for girls growing up, films like this will show we won’t have this heavy shame when we are interested in things like boys and sex.”

The film follows three 13-year old girls who convince themselves that if they see a naked man, they will become a “woman.” They skip school to look at a Playgirl magazine to initiate the womanhood process.

The film is meant to be comedic while at the same time breaking down the taboos surrounding females and puberty. Also, the cast is starring all females as well as being written, directed, and produced all by young women.

They finished filming on January 9. It was shot on 16 mm coloured film. Harris said that the main reason she wanted to shoot it on film is because it resembles the 80s aesthetic, it takes a different kind of filming skill and it reflects her old soul.

“I like the excitement of waiting for the film to be developed. Our generation is so into everything being instant. Film requires patience,” Harris said. 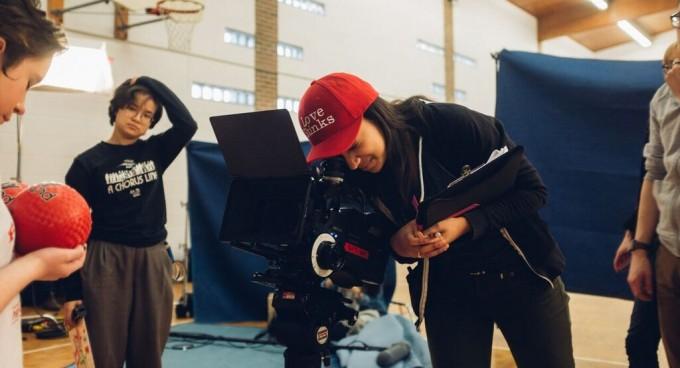 The cost of the physical film alone is $5000 and there are many other costs the crew had to consider including the art, marketing, travel, and equipment which all equates to $15000. Harris and Ortiz created a Kickstarter campaign to raise money which they worked on for two months. Their goal is to raise $6000 on the Kickstarter. If they do not reach the goal, they will not get the money.

They are currently only about $600 away from their goal. “The main reason I am so happy is that over half our donations are from people we’ve never met before,” Harris said. “It means people care about our issues. They care and that’s a big compliment.”

“We are working really hard. We are so happy people are seeing that passion and love,” Ortiz added. “We hope it inspires people in years to come.”

“I have a film slate and on the top I have a quote that reads ‘head full of doubt, road full of promise’,” Harris shared. “I see that every time before a take and keep it in mind in moments of doubt.”

“Love Stinks” will be shown at Ryerson’s film festival in May.