One of the longest-serving members of the Ryerson Rams men’s hockey program is about to call it a career.

He is, in the words of head coach Graham Wise, “the first one at the rink in the morning, and the last one to leave at night.”

And if you’ve ever been to a Rams game, you probably never even noticed he was there.

His name is Mike Toman. But for the past eight seasons, Rams players have known him better as J-Roc, their equipment manager.

Like many Toronto kids, Toman grew up fostering a deep passion for hockey. He liked to keep busy, playing soccer and baseball. He devoted 10 years to Ukrainian dancing — at which he was a natural and in which he regrets not pursuing a career — but Toman’s first love was always hockey.

He played as a forward in the Greater Toronto Hockey League (GTHL), and was invited to try out for a few double-A clubs —But after breaking each of his ankles twice, Toman’s hockey days appeared to be over.

Then, in the fall of 2008, in his senior year at Western Technical-Commercial high school, Toman got a fateful phone call from his friend, Ryan Anderson. Anderson worked at the George Bell Arena, where the Rams played and practiced, and he knew Toman was searching for a job.

“[He] told me, ‘Ryerson University is looking for an equipment manager, call this guy, Graham Wise,’” says Toman.

As soon as he got off the phone with Anderson, Toman called Wise to ask about the job.

“He asked me to come in the next day and told me to bring my résumé,” he says. “I was the only one who called Graham — no one else applied for it.” 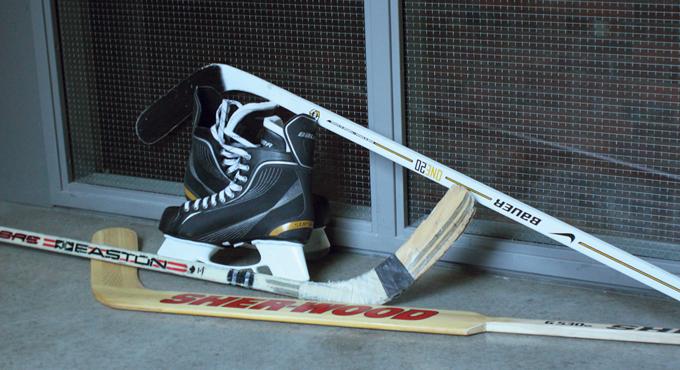 Toman wasn’t old enough to buy himself a beer, but the job was his, and he found himself looking after the needs of an entire varsity hockey team.

At the time, Toman was doing his high school co-op with a gym teacher, but he approached his co-op teacher to see if his job with the Rams could also fulfill his credit requirements. After his teacher met with Wise to discuss it, Toman had what most high school students only dreamt of: a paid co-op.

But as enviable as his new position may have been, Toman had his hands full from the start.

“I walked into the room [on my first day], Graham stopped everyone getting changed and introduced me,” says Toman. “One guy stopped and said, ‘Who the fuck is this guy — J-Roc?’”

J-Roc is a character from the popular Canadian comedy Trailer Park Boys, and while Cory Konecny, the player who first bestowed the name on Toman, graduated in 2011, the nickname stuck for his entire Ryerson career.

“I haven’t heard Mike in the last couple years here,” says Toman with a laugh.

When Toman joined the Rams, he had no experience managing equipment outside of his own time as a player.

As a teenager in a job traditionally held by 40, 50 and even 60-year-olds, Toman suspects that he was the youngest equipment manager in the CIS for many years, and admits that it was initially an uphill battle to gain respect in the locker room.

“At the time, guys were kind of belittling me, not picking up their stuff, you know, ‘Look at this young guy,’” he says.

But that changed quickly as the team saw the dedication Toman brought to his duties.

Matt Rehman, a Rams defenceman from 2008 to 2011, took it upon himself to give Toman some pointers, but aside from Rehman and the coaching staff’s occasional guidance, Toman was learning as he went.

“I learned everything on my own, I stayed long hours after [practice], I watched DVDs, YouTube, anything,” he recalls. For the first couple of months, Toman carried a notebook in which he’d written each player’s individual equipment preferences, all of which he eventually committed to memory.

“I learned everything on my own, I stayed long hours after practice”

“Over time, they started to respect the job,” Toman says. “They saw that I was there for long hours, saw that I did anything and everything for them, and a month later, I had no problem with anything.”

Now 24, Toman has more seniority than any player, and they know it.

“With new players, every year I have a meeting, no coaches, and you just lay the law down … you have to respect what I do and how I want it done, and I’ll do whatever you want me to do in return,” Toman said.

When Ryerson moved into the Mattamy Athletic Centre in 2012, it marked a new era for Rams Athletics, but it also opened new doors for Toman.

Through the connections he made at the MAC, Toman was able to spend the 2012 winter break working with the OHL’s Mississauga Steelheads. And after a member of the Toronto Maple Leafs equipment staff joined the Rams to work with him during the last NHL lockout, Toman was invited to work some morning skates and practices with the Maple Leafs and the visiting San Jose Sharks, and developed a friendship with NHLer Joel Ward.

“[You grow up] pretending you’re them playing hockey on the pond,” he says. “And next thing you know, you’re in the room standing next to the guy.”

Despite his impressive tenure as an equipment manager, Toman is making this season his last, and setting his sights on a future outside of hockey.

He has been with his girlfriend Elena for two years, and plans on getting engaged soon.

“I knew the second I met her that I was going to marry this girl, and you can quote me on that,” Toman says.

“I said right then and there in the ambulance, ‘I’m going to do this for the rest of my life’”

And after his father suffered a stroke six years ago, Toman realized what he wanted to do with his life, and it wasn’t equipment managing.

On Feb. 24, Toman will take his EMS entrance exam at Humber North College, pursuing a career as a paramedic.

“I said right then and there in the ambulance, ‘I’m going to do this for the rest of my life,’” he says recalling the trip with his father to the hospital with two young paramedics.

“They became my heroes. I want to become someone else’s hero.”