The inside of Zone Startups India, which looks nearly identical to Ryerson's DMZ.

The crowd looked on with great anticipation as Canada’s Governor General David Johnston kneeled down, a coconut in his hand. The pressure was on — as per the Hindu ritual, good luck would be invoked if he could crack the coconut in half. The husk-covered outer shell represents all a person’s anger and negative qualities, while the inner layer portrays the pure and positive. Thankfully, Johnston’s pitch managed to crack the coconut.

This was the official inauguration of Zone Startups India, the DMZ’s sister-startup accelerator, back in 2014. The ceremony included a delegation from both Ryerson and Ontario. Two years later, both delegations are back in Mumbai — but this time to celebrate Zone Startup India’s expansion, along with its two-year anniversary.

This time, it was Ryerson’s new interim president Mohamed Lachemi speaking to a crowd of entrepreneurs. “We’ve achieved more than we anticipated in the beginning,” he says. “In India, Ryerson will be known as the innovation university.”

Two clocks hang above the front desk, showing times for both Toronto and Mumbai. The incubator is modeled after Ryerson’s DMZ, not only in its operations but also in looks. At first glance, Zone Startups India shares striking similarities to the DMZ — long white tables and mesh rolling chairs. Except this room has an 18th floor view overlooking the Arabian Sea.

The incubator is housed inside the Bombay Stock Exchange (BSE) building, located in Kala Ghoda, a busy yet tranquil neighbourhood in South Mumbai known for its art galleries and heritage buildings.

In recent years, the startup scene in India has been bustling in cities like Bangalore and Delhi. Startups have trickled into the everyday lives of Indians, after a number of companies — from eCommerce sites like Flipkart and Uber-like taxi apps like Ola — achieved huge successes in the market. In Mumbai, young entrepreneurs work diligently on their separate startup ideas in coffee houses and dorm rooms predominantly in the suburban neighbourhood of Powai, often referred to as Mumbai’s Silicon Valley.

After its establishment, the Zone became one of the first startup accelerators of its kind in Mumbai

After its establishment, the Zone became one of the first startup accelerators of its kind in Mumbai, where bright minds can receive the resources and mentorship to get their ideas going — and the visionary behind this all was none other than Ryerson’s former president, Sheldon Levy.

Ajay Ramasubramaniam, director of Zone Startups India, was part of the original team that was taken to Toronto alongside Levy in 2013, when the plan was being finalized. Recalling the Zone’s humble beginnings as he wraps up the expansion ceremony, Ramasubramaniam says its successes are in large part due to Levy’s steadfast implementation of the plan.

“Sheldon was the guy with the original vision,” he says. “And it takes a lot of guts or a lot of conviction to do something like this. Unlike other partnerships, Ryerson was not looking to acquire more students or to expand their campus abroad.”

Although it was modeled after the DMZ, Zone Startups was to be its own entity, central to India. So far 13 of the startups have moved on to soft launching in Toronto — but Ramasubramaniam says the Zone isn’t an incubator that prepares and sends off startups to Canada or the United States. In India, investors are pouring money into what’s become a flourishing startup ecosystem.

“Stanford runs mentorship programs in Bangalore, and Duke also came here recently. But not a lot of international universities actually have successful models like the one Ryerson has brought here,” he says.

Shortly after the opening of the DMZ back in 2010, a delegation from Ryerson arrived in India to search for young entrepreneurs throughout various technology institutes to incubate their startups in North America. But what came of the trip was much greater than what was originally planned — a partnership between the university, Ryerson Futures Inc. and the BSE Institute made Ryerson the catalyst to a greater channel of opportunity between India and Canada. 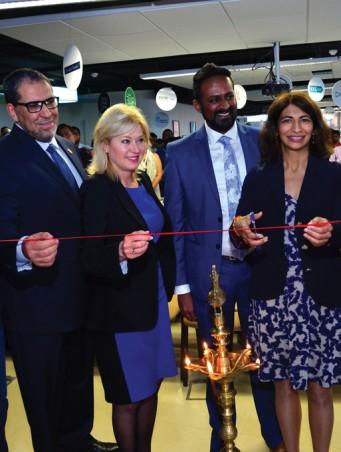 Lachemi, Ramasubramaniam and other delegates cut the ribbon at the Zone’s second anniversary. (Photo: Yogesh Agarwal)

As the director, Ramasubramaniam is a mentor to all the entrepreneurs working on their startups. Day in and day out, he helps develop ideas that are part of India’s growing startup culture. The country currently has the third largest number of startups globally, behind China and the United States. It’s also the youngest startup scene in the world, with 75 per cent of the entrepreneurs younger than 35.

Vishal Chaudhari is the founder of one of 63 startups currently being incubated in the Zone.

His startup, Wingage, aims to tackle one of India’s main urban inefficiencies — access to public Wi-Fi. Even in major cities like Mumbai and New Delhi, it remains difficult to find open internet, which has largely been blamed on national security concerns. “People want free Wi-Fi, but the problem in India is fear,” Chaudhari says. “If a business installs free Wi-Fi, police will harass them and extort them for money.”

Chaudhari adds that India tightened its laws on public internet access after a series of terror-related incidents in 2008.

Twenty-one bomb blasts rocked the city of Ahmedabad in July 2008, taking the lives of 56 people. The investigation that followed found that emails had been sent to news agencies warning of the attacks only minutes before they happened — a group called the Indian Mujahedeen had allegedly sent the emails, though when police tracked the IP address of the sender they found a group of American expats.

Tighter regulations mean open Wi-Fi now has to incorporate a User Management System (UMS), a network that allows for user authentication. However, the cost of setting up such a system is around 1 lakh rupees (approximately $2,000 CAD). Wingage helps reduce that cost to 12,000 rupees ($240 CAD).

Chaudhari started off by offering Wingage for free, which helped clients begin to see its success. By helping businesses set up Wi-Fi on Wingage’s cloud-based system, Chaudhari provided them with different options for authentication — whether that’s logging onto Facebook, entering a mobile number or signing in through email.

It’s a combination of the Zone’s growing reputation as well as being embedded into the BSE building that gives potential partners a good first impression. “We eventually got Bajaj Allianz with the Zone’s help, which is the biggest insurance company in India,” he says. “Whenever you call a bank or something, they receive your call and speak to you because you’re in the BSE building. It’s kind of the centre of the capital here.”

Chaudhari adds that the Zone helped them out on more than just the business aspects. “As the director, Ajay is an excellent person to mentor us forward. He kept pushing us to get to this point,” he says. “We see him as a co-founder in our business who doesn’t have any equity.”

Since launching in February, Wingage has set up open Wi-Fi in over 50 locations around Mumbai, and is looking to expand to New Delhi in the near future.

Businesses like Chaudhari’s Wingage have helped alleviate problems with accessibility to basic needs like communication. Similarly, other startups at the Zone are helping to do the same in different fields.

Koffeeplace is a startup from the Zone that has led many companies in India to make a conscious effort in hiring more women. “Here, people don’t have the mindset that women can have a family, juggle everything and go to work,” says Anisha Mehta, founder of the website.

Her startup provides a platform of resources for women who are trying to get back into the workforce, as well as a place for companies to list their job postings. The website targets women that have left the workforce for reasons like marriage or childbirth.

“When you mention Zone, it goes a little farther. It has a big name.” – Anisha Mehta, founder of Koffeeplace.

“Sometimes they’re so talented, but after having left the workforce they can’t seem to go to the next step. So we want to help them get there,” says Mehta. “Only 18 to 25 per cent come back to work after taking a break.”

But Mehta says mindsets are slowly shifting and things are beginning to change. “We’ve had a lot of success stories,” she says. “Companies are hiring more women now. They see that women are in a lot of the business field. Women are known to be great multi-taskers.”

But to start off, Mehta, just like Chaudhari, needed significant help getting partners on board. “When you mention Zone, it goes a little farther. It has a big name.”

Koffeeplace now features job postings from over 50 companies in marketing, architecture, digital media and a range of other fields. Mehta notes that she’s seen more women involved with startups in India as well, and within the Zone itself. “Nowadays it’s not as hard to start something on your own,” she says. “These incubators can help you in every stage.”

In 2015, the number of startups funded in India reached 925. The Indian government, acknowledging the benefits to the economy, unveiled a state-backed initiative which allocates $1.5 billion for the funding of startup businesses.

India’s thriving startup scene is reflected in the Zone’s recent expansion. Since its opening, it has employed over 400 people and has incubated 65 startups. Its connection to Ryerson has also allowed for a select number of Indian entrepreneurs to enter the Canadian market, after being chosen through the Next BIG Idea competition, which is held annually. The coming months will also see the rise of a new program dubbed the Soft Landing, which will focus on bringing international startups to India. Although only in its early stages of creation, the Soft Landing program will take up another floor of the BSE building, and will help foreign entrepreneurs enter the Indian market. “The world works like a village,” says Lachemi after the announcement. “We are now a connector for anybody who wants to do business here.”

Lachemi, Ramasubramaniam and the other delegates perform a different ritual on the day of the second anniversary, this time to officiate the expansion ceremony. Standing above a golden lamp, they take turns lighting candles and placing it onto the lamp’s edges. This ancient fire ritual is used to dispel darkness, and bring light to the future.

“We have a long term agenda in India,” Lachemi says after the announcement. “This is a gateway between two cultures, and two good markets.”