“I’m excited for the boys,” said head coach Dustin Reid. After two tough losses in one week, Reid was “excited to see how well they [Rams] played, and they stuck together in the match.”

The first set was a solid back-and-forth effort from both teams. Ultimately the Rams prevailed, beating the Lancers 25- 17. Rams Uchenna Ofoha and Lucas Coleman helped run up the points for Ryerson in some great plays.

“We didn’t make very many mistakes and we received well,” said Reid. He said this lead to a better offensive display, which helped the Rams make a more balanced attack. “They [Windsor] had trouble hanging with us at the net.”

The second set was close. In the first half the Rams and the Lancers were holding their own. As soon as either team got a few points, the other caught right back up. The Rams slowed down close to the end, but after a time out, they came back strong. Ram Robert Wojcik scored the team’s final two points, which put the Rams in the lead at a close 25-23. 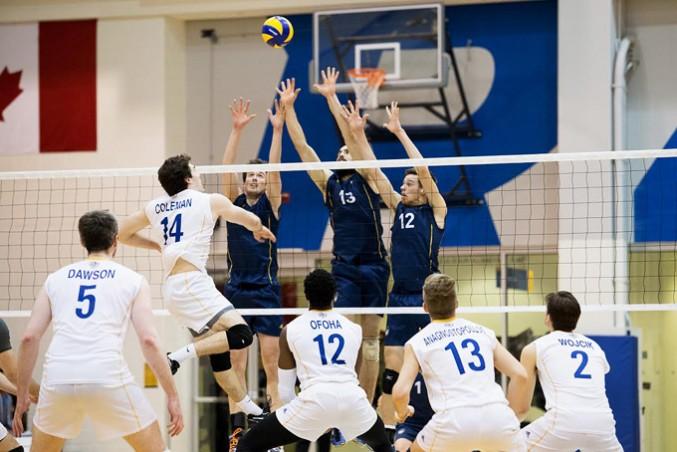 “We came fired up,” said Ram Alex Dawson, who had the most kills and digs in the game. “I think we all played really well – individually and as a team.” This team spirit would give the Rams what they needed to take over in the third set.

It seemed that the Lancers all but gave up in the third set, giving the Rams the edge to win. Ram Coleman was on a roll in the first half, running up the score and giving the team the boost they needed to take down the Lancers. It was in the end of the last set that Dawson really shone, and the team pulled out all the stops. The Rams beat the Lancers 25-17.

“Clearly defensively and with our block, they [Rams] worked together and we made it tough for Windsor,” said Reid.

“I’m feeling really good,” said Dawson. He said that after losing two games the team came out excited to play. Dawson said that his success in the game was because he tried to stick to the game plan and trust the coaches.

“Our team has always been physically talented team and a strong team,” said Reid. Sticking to the game plan is what Reid said he always wants his team to be strong at. “It’s the only way to win at this level.”