Many residents have seen a consistent stream of problems, including leaks, ceilings caving in and inadequate food services.

First-year fashion design student Nicole Raitakari moved into the building at the beginning of the school year. While taking a shower, she says part of her ceiling collapsed and the vent fell and hit her on the head.

She added that when she first moved in, the water was running brown. Last semester, she fainted because of dehydration and a lack of food — which she attributes to the problems at Parkside. At the residence, she said she was afraid drink the water.

“I missed a test because I was in the hospital … I feel like a criminal when I live here,” Raitakari said. “We’re all really young, we’re all students living here, most of us are in first-year. We don’t really know our tenant rights and [Parkside] knows that, they’re just taking advantage of it. ”

Complaints about the building started at the beginning of the year, when the move-in date was delayed by about two months. Prior to renovations in 2015, Parkside was known as the Primrose Hotel — a half hotel, half student housing building. The building was revamped with new hallways, bathrooms and bedrooms, totalling $25 million in renovations said Kamal Uppal, the marketing manager for Parkside, in August 2015.

Summer rates for Parkside were listed at about $1,400 for a standard single, according to Raitakari. The prices have since gone up and now the same room costs $1,865 per month.

A private Facebook group was created for residents to vent their complaints. Several residents posted about ongoing construction — one student wrote that they were prescribed an inhaler because of the construction dust. 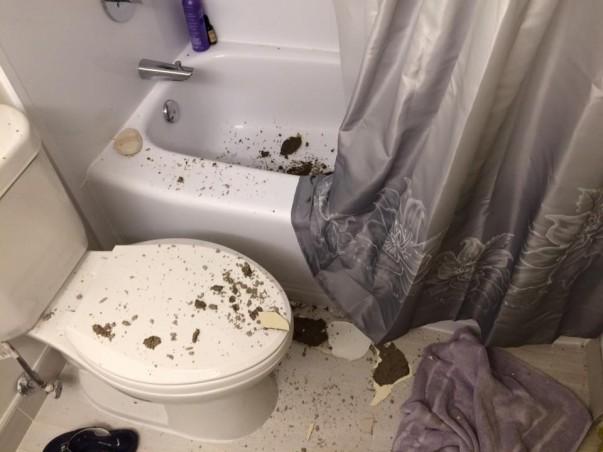 When Raitakari posted on social media, she said Parkside staff contacted her mother asking for her daughter to stop posting online.

David Simor, a policy and community relations advisor from city councillor Kristyn Wong-Tam’s office, said he started receiving complaints in the fall about Parkside not living up to the terms and agreements stated in the building contract.

Parents and students have since been connected with Municipal Licensing and Standards, a branch of the municipal government which handles complaints relating to the Landlord-Tenant Act.

“There have also been some concerns about the property standards of the building … we have looked into that and we’ve had city staff do an investigation,” Simor said.

Danny Roth, a spokesperson from Knightstone Capital, said he is unaware of any investigation involving Parkside. “I would strenuously disagree with the suggestion that a lot of students are unhappy,” he said. “I would suggest to you that majority of students are quite pleased.”

Municipal Licensing and Standards was not available to comment at the time of publication.

Ben Ries, a staff lawyer at Downtown Legal Services at the University of Toronto, said that the clinic has been helping students from Parkside since complaints started in the Fall. “That building alone has taken a significant chunk of our resources this year and continues to do so,” he said.