S itting in his office, Patrick Tatham looks like a giant in a shoebox. His massive frame swivels in his chair as we sit down for an interview.  For a man who’s just won Ontario University Athletics coach of the year, there was a time where he looked to find his place as head coach for one of the best basketball programs in the country.

To outsiders the task at hand seemed insurmountable: step in as head coach for a team that just last season won their place as the third best team in the country under the guidance of legendary coach Roy Rana. And the biggest fear for Tatham was failing to live up to the standard of success that Rana had achieved for the Rams, effectively putting Ryerson basketball on the map. As Tatham talks about the moment he really felt at home in his new role, he smiles shyly, rubs the side of his face with a baseball glove sized hand and responds with: “University of Toronto.”

“The season opener at home, we do not lose to U of T, and I’m just thinking, ‘Oh my god.’ I was so nervous because they shot the lights out in the second half,” Tatham said. “Someway somehow we just kept it positive and kept the energy high and pulled off a win in nine seconds. At that point it was like, ‘Okay I’m built for this, this is alright.’”

“I told him [Rana] that this team was better than last year’s team that won a bronze.”

And after attaining the title of best team in the country, beating Carleton University for the first time in 16 years and winning gold at the Wilson Cup final four this past weekend, it’s safe to say Patrick Tatham has exceeded the expectations anyone could ever have for an interim head coach.

The process for Tatham started early. After learning — in early August — about Rana’s planned sabbatical for the upcoming season, he worried about whether or not he could command the same respect his predecessor did. His fear was put to rest quickly at a team building retreat, intending to create chemistry and trust between players.

“I got to tell them my real feelings like, ‘I am just as nervous as you guys and I’m learning just like you guys, but I’m going to work really hard to do this right,’” Tatham said.

At the beginning of this season, you wouldn’t have been wrong to doubt the success rate for the Rams in their upcoming season. Not only were they faced with the loss of their sideline leader in Rana, but also their captain in Jahmal Jones graduating and moving on to play in Europe. The eventual  turnover is a natural part of the game. But arguably the best player to ever lace-up for the Rams left — on paper — a sizeable hole to be filled. And it is here that the Rams can be likened to the Pittsburgh Steelers of 1976 or the Buffalo Bills of the ‘90s. The loss of a superstar forced Tatham and his group of very talented players to readjust and figure out a different way to succeed. For Tatham this different way meant taking a narrowly focused team — surrounding one great player — with largely the same roster and turning them into a dynamic, fast-paced team that spreads the ball out. 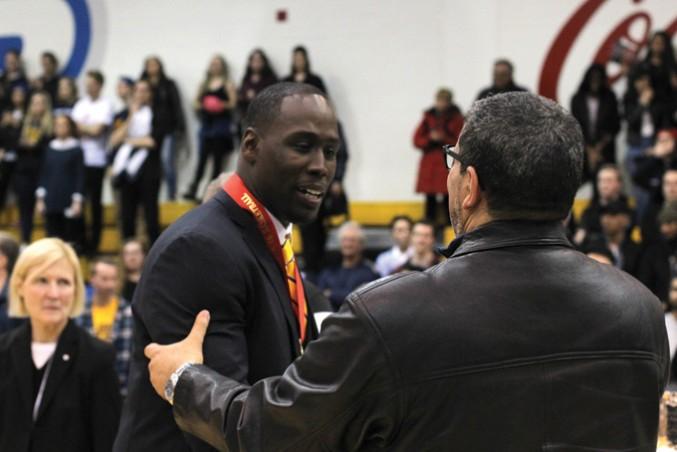 “I really love watching the Golden State Warriors and if you watch them closely you notice how much they move the ball and for me I think that’s the one thumbprint I’ve made on this team,” Tatham said. “The ball isn’t going to stay in one spot or one player’s hand for long. That whole, ‘Everybody gets a piece of it,’ has been great, I think we have five guys averaging double digits so go figure.”

After defeating Toronto on opening night and finding his rhythm as head coach, Tatham took off. And while some people were surprised by the success the team achieved early on, it’s easy to forget that Tatham has been a head coach before, filling in with the Rams and at Stoneridge prepatory school in California. Not only that, but much of the Rams roster for the 2015-16 season was made up of  returning players, used to Tatham’s honest and direct approach on and off the court. And despite the readjustment in terms of filling in gaps on the court,  the camaraderie and overall way they move on the court is distinctively Ryerson.

Arguably the best transition team in the CIS — centered around their ability to force clean turnovers — is summed up by the fact that the Rams have the luxury of  not only relying on the two-on-one, but punishing teams from any spot on the court. This quick full-court transition strategy has been the foundation Rana has laid over the seasons — a foundation Tatham believes is crucial for the team to be successful.

“He had some big shoes to fill but he did it, he never failed us.”

“I would like to say I’m surprised, but I’m really not. Ever since my first year coaching alongside Rana, he’s been there for us. And when I heard the news this year I was pretty excited because people were looking down on us in losing Jamal and Rana and he had some big shoes to fill but he did it, he never failed us,” said guard Jean-Victor Mukama.

Then there was Carleton. The behemoth team that Ryerson University hadn’t beat in 16 straight years — the enemy they’re forced to respect out of sheer talent. It was Tatham’s mountain; a challenge any coach would be hungry for. But for Ryerson it was a shared hunger, the need to defeat a team every single player on Ryerson knew they were capable of beating. And it wasn’t only Carleton on the weekend of Jan. 22 but on back-to-back nights, the Rams also had to take on the nationally number one ranked University of Ottawa Gee-Gees.

The week leading up to the games, Tatham had an idea to get his team motivated for the challenge ahead. Not knowing how each player would respond, he taped a poster to each individual locker and door in the men’s change room with the quote: “If we continue to do the same thing that we have always done we will get the same result. Be uncommon.”

“When you have that level of communication and trust it’s just not players and coaches anymore, we’re brothers,” said fourth-year guard Adika Peter-McNeilly.”

Then Tatham and the Rams did it. Beating Carleton Friday and Ottawa Saturday night to secure the title of the best team in Canada. And Tatham notes that his initial thought after beating Carleton wasn’t to celebrate, but to get the team back into the video room, at 10:30  p.m. to study film for the Ottawa game the next night. That weekend was the arrival of a team a full season in the making — showing the Ryerson community and beyond just exactly what Tatham and the Rams were capable of.

And with the Rams flying out to Vancouver to face off in the CIS championships as the number one seed, only one question remains: What do the next few years hold in store for Patrick Tatham?

While he alluded to the fact that Rana is expected back with the Rams in the beginning of May, it still begs the question as to whether or not Tatham will move back to an assistant coaching role. Yet after this historic season, it’s hard to imagine that Tatham won’t be fielding head coaching offers from other universities.

The future, as Tatham notes with a wave of his massive hand, has yet to be decided — with his focus,  zeroed in on the weeks ahead, a potential national championship within his grasp. And as the interview comes to a close, Tatham smiles at something that’s crossed his mind and swivels in his chair again. Now for the man who’s just won the OUA coach of the year, Patrick Tatham looks perfectly at ease.