Katrina Grogan-Kalnuk seriously injured herself for the first time when she was 12 years old. It started with a discomfort in her left thigh. She thought the discomfort was gradually getting better, but it wasn’t until she got on stage that the pain hit sharp and fast—a burning sensation that spread throughout the rest of her leg. It got so bad that Kalnuk had to take eight weeks off from dancing entirely. She now likens the experience to the beginning of her relationship with pain—something that all dancers relate to. At the time, 12-year-old Kalnuk was terrified.

“It’s really hard at that age to understand what’s happening to you,” she said. “You’re told by your teachers that bad pain is sharp and in the moment, and good pain comes from stretching and moving, but I don’t think you fully grasp that for a while.”

The competitive dance community at Ryerson is daunting, with the academic pressure coming in the form of subjective ‘report cards’ given out by instructors based off of your daily auditions and their critique of your performance. While there are benchmarks to hit in terms of technique, the dance program is not as straightforward as completing weighted assignments before writing an exam, with a correct response to a question.

Despite the abstract nature of the program, lead dance instructor Vicki St. Denys said that when it comes to marking the students, it’s a pretty complex system. On top of sit down interviews to provide official feedback twice a semester, the dancers are mentored by many of the same professors throughout the four- year program.

“In football you either catch the ball or you don’t—there’s an objective outcome. But in dance, it’s very abstract,” said Clara Eaton, a fourth-year Ryerson dance major. “When someone tells you, ‘You aren’t making progress,’ or that what you’ve just presented sucks, it can feel personal. And a lot of dance is learning to detach yourself from that criticism.”

Yet for the modern contemporary or ballet dancer, force is exchanged for grace. Landing on the tips of their toes, before transitioning into an arabesque leap—the chance to show how the physical toll of each rehearsal manifests itself into a unique performance, is lost. This paradox is well known amongst dancers—turning the normally awkward human body into a fluid work of art, and at the height of dance talent, emotionally manipulating the audience to forget the months of preparation.

“You’re trying to tell a story and you’re trying to move an audience with just your body, nothing else,” said Sacha Lank, co-captain of the Ryerson Dance Pak. “That’s when the bumps and bruises go away and you fake it till you make it for those three minutes, so someone else smiles while you’re in pain.”

Because of this push for audience pleasure, the physical and mental consequences of modern dance and ballet are never fully on display, compared with other competitive sports. Casts, splints and bandages are a staple of the NFL and collegiate football and, to an extent, in competitive gymnastics. However, when the curtains are pulled back to reveal a uniform aesthetic (right down to the makeup) bruises vanish and the ankle bandages, if not completely avoidable, are worked into the overall performance. This need to avoid strain from an audience perspective leads to injury. The Journal of Health and Physical Education states that between 1991 and 2007, 113,084 children between the ages of three and 19 were treated for injuries related to dance in U.S emergency rooms. 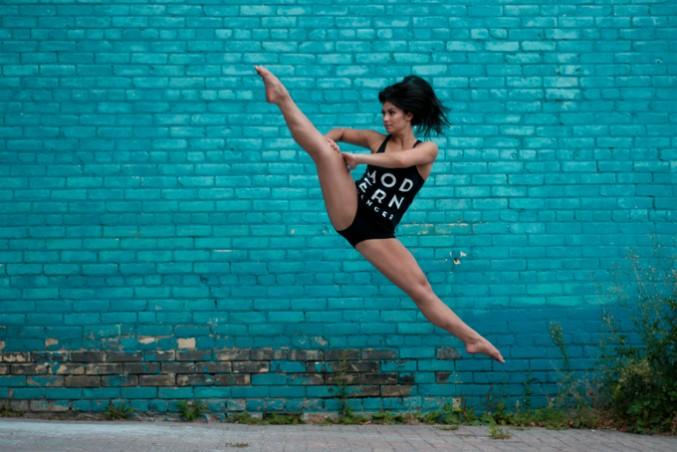 “I’ve had all kinds of injuries, I’ve dislocated my shoulder several times, I’ve pulled hamstrings and sprained ankles,” Kalnuk said. “Last week I slightly dislocated four of my ribs and my sacroiliac joint, which is basically the ball socket in charge of moving your pelvis.”

While the physical endurance is often the highlight of modern dance and ballet, mental toughness often goes unspoken. Specifically, “missing the six hour practice with a new routine, forcing you to catch up to everyone else,” says Dance Pak co-captain Zoe George. As a former dance major at Ryerson, George touched on a similarity between dance and the sports world in terms of dancing 30 hours a week, the idea of putting rest first, “when all you want to do is move,” can be hard to do, the same way watching your teammates practise from the sidelines can be stressful for any athlete.

“The bumps and bruises go away and you fake it till you make it for those three minutes, so someone else smiles while you’re in pain”

For Deborah Lundmark, founder and artistic director of the Canadian Contemporary Dance Theatre (CCDT), modern dance is as physical as it’s ever been. Dismissing the idea of three-minute performances as being the norm, she notes that the routine her troupe is rehearsing is the fastest she’s ever seen at 15 minutes long. The style of the routine is quirky, according to Lundmark. It’s insanely physical, and it highlights capabilities of today’s contemporary dancer far beyond what you’d expect to see—with training encompassing modern, hip- hop, electronic and ballet dance.

“Modern dance now is equally as demanding as any ballet piece that you’ll see, and with the stress of such physical movement, you can’t just throw anyone in there,” Lundmark said. “You can’t learn a piece all at once, you need to learn in layers, so the body gets used to the physicality over time.”

As Kalnuk leaves class and heads back to the studio for the evening round of rehearsals, her body aches all over. Pain from a previously dislocated shoulder turns sleeping into a chess game, and wrapping the beige tensor bandage around her right ankle has become a part of her morning routine. But as she shifts her weight around the springboard floor, the familiarity and adrenaline she’s felt since she was 12-years-old comes flooding in. Preparing to launch into a routine she has done a thousand times before, the pain fades away. Kalnuk ignores the gouges and faded auburn stains, and for the next few hours her movements are graceful, fluid and strong.