By Alanna Rizza and Brenda Molina-Navidad

The plan includes projects that are to be completed in the short term, as well as projects that will be looked into for the long term. The plan include improvements on Gould Street, Nelson Mandela Walk, laneways on campus, the campus entrance at Gould and Yonge Streets and increasing green spaces.

Ryerson President and vice-chancellor Mohamed Lachemi said the projects will enhance students and the public’s experience on campus. Lachemi added that community engagement is top priority and sees the public realm plan as a way to engage the downtown neighbourhoods around the university.

Ryerson is working in partnership with city councillors and the Downtown Yonge Business Improvement area (BIA) to help implement the public realm plan. 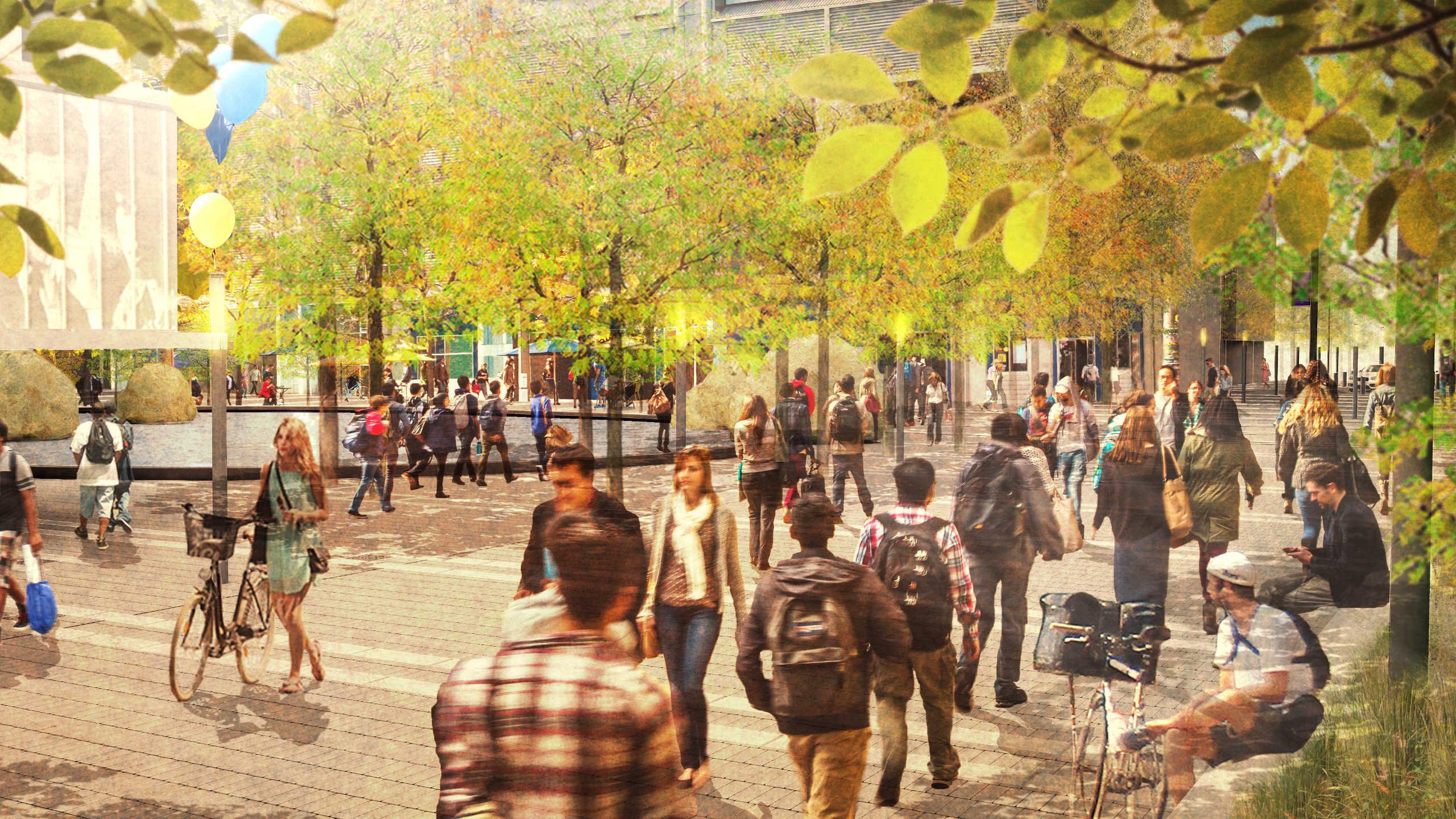 Wong-Tam also announced the City of Toronto’s $2 million contribution to the plan.

“The $2 million is a modest contribution but I think it will hopefully demonstrate support from the city and will be able to be used by Ryerson to leverage, to work with other stakeholders and corporate partners on bringing more to the table.”

According to the plan, the project to make Gould Street more accessible will be completed within 5 years. This project includes a recommended design for Gould Street that includes raising the roadway to the level of the sidewalk and using the same paving found in front of the Image Arts Centre and Devonian Pond to increase accessibility. Gould Street will be one level with Nelson Mandela Walk and and the upper part of Victoria Street. There will also be increased lighting in this area.

Ryerson’s vice-president of administration and finance Janice Winton said the next step is to hire a designer for this part of the plan for Gould Street. She also said that more details on the schedule and cost will be released.

Also to be completed in the short term is a recommendation for the front of the Student Learning Centre at Gould and Yonge Streets to have the road ramp up to the sidewalk and to widen the pedestrian walkways. This gateway into campus will also be improved with public art, an increase of lighting and green space. There will also be replanting of the trees next to Kerr Hall, Oakham House and O’Keefe House. 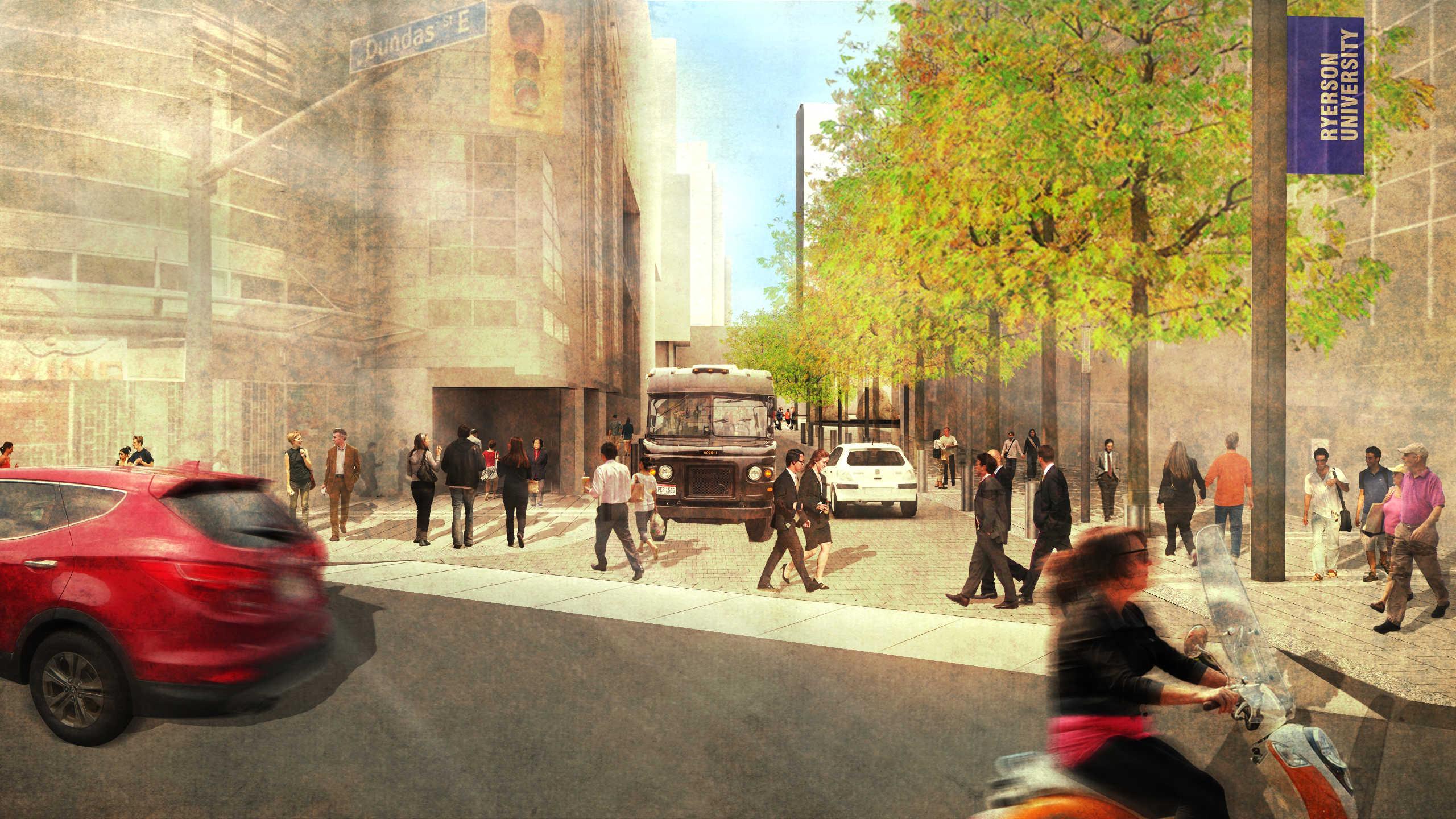 “[Ryerson] can take vision and actually bring it to fruition and that is very unique in that type of partnership that we’ve developed,” said Mark Garner, executive director and CSO of Downtown Yonge B.I.A.

To be completed in the medium term of 6 to 10 years is a Gould Street plaza that will be located between O’Keefe Lane and Victoria Street. There will be special paving, trees and planters, new seating areas and lighting.

Other medium term projects include enhancing the pavement and lighting to create safer and easier movement through O’Keefe Lane and improving the front of Jorgensen Hall at the campus entrance of Gerrard Street and Nelson Mandela Walk. Also, Ryerson and the City of Toronto are looking to reduce roadway and increase pedestrian walkways on Mutual Street from Dundas and Gerrard Streets.

Long term projects to be completed in eleven years or more include, improving lighting and green space on Dalhousie Street, creating new pedestrian pathways and a revitalization of the Kerr Hall Quad and Pitman Quad, which will include planting and improvements of lighting and furnishings.

Other potential projects include increasing street signs and banners on streets towards the Mattamy Athletic Centre and the Ted Rogers School of Management, providing special lighting on the entrances of campus, implementing energy efficient lighting and installing art installations around the core areas of campus.