With a personality as bright as her pink hair, Hope Nicholson—comic book historian and owner of Winnipeg comics—led a women in comics seminar at Ryerson on Nov. 15.

Nicholson explained that there are different aspects when approaching women’s representation in comic books, “the characters on the page and how they are reflected, different societal norms in the comic book industry, women creators and what they have been through and the fans who read comics and how they have absorbed the content.”

The seminar analyzed each decade of women in comic books from the 1930s to the 2010s. She identified trends such as jungle comics, where women dressed in tight leopard print clothing; to the beginning of the “dumb blonde,” trend, where the blondes were deemed unintellectual because of their hair colour.

Specifically in the 1940s, however, women were seen as workers more often than not, which is unusual based on the time period.

“For me I find it very interesting to see how many women were working in comics in the 1940s. It isn’t really something that people think or talk about,” she said. 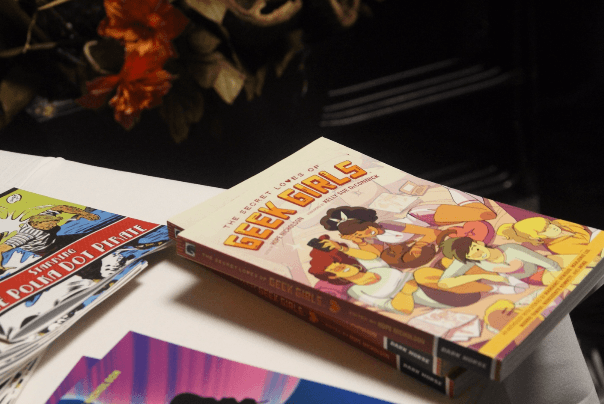 The audience laughed at every joke and at every ridiculous costume that Nicholson showed.

Nicholson is also writing her own book called “The Secret Loves of Geek Girls.”

“It’s is about everyone telling a little essay or a little story about a situation in love, sex or dating that is very important to them.”

The story is an all-female anthology of “true stories about love, romance, and sex,” according to her website. The book will feature cartoons by Canadian author, Margaret Atwood.