When Kellie Ring decided to transfer to Ryerson and join the Rams women’s basketball team in the summer, she made sure to do it right.

Instead of reminiscing about the good old days she’d had at the University of Ottawa, Ring got a head start settling into her new home. Training camp wasn’t until August, but she arrived at the Mattamy Athletic Centre (MAC) three months early. She wanted  to give herself time to get to know her teammates and coaches in her last year of Ontario University Athletics (OUA) eligibility.

Ring thought she would be the only one at the MAC in the middle of summer. Instead, she was pleasantly surprised—and relieved—when she saw her new teammates, Sofia Paska and Katherine Follis, working out like they were a week away from the start of the season. 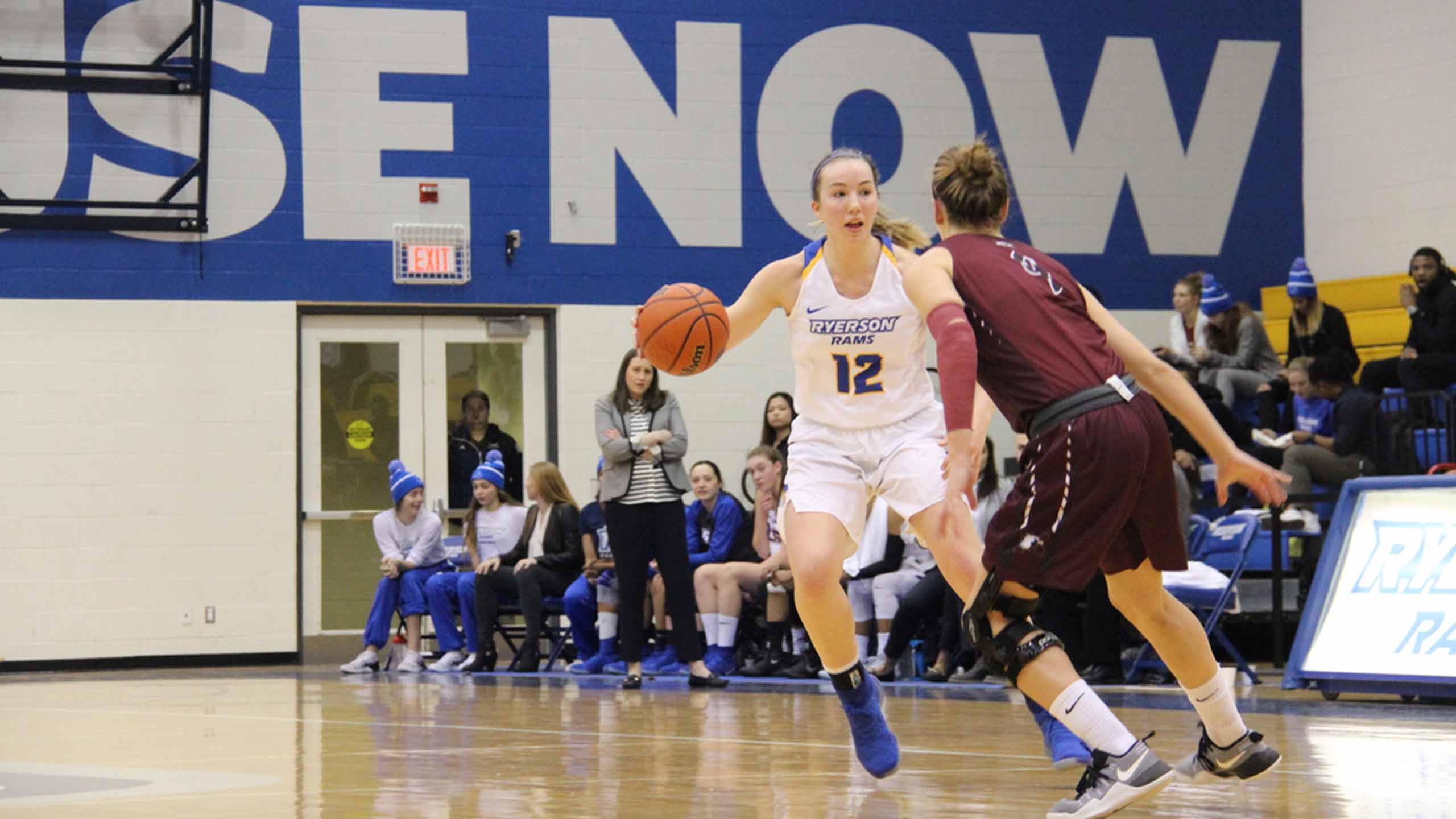 “I remember the first day that summer, it became really obvious that they were hungry to get better,” said Ring. “I wanted to be part of that, and do whatever I needed to do to help them take the next step this season.”

After winning Ryerson’s first-ever national silver medal at the CIS (now U Sports) tournament last year, it’s only natural that the Rams have their sights set on U Sports gold. But before they can look to nationals, the team must defend the first Critelli Cup championship in program history—a title they won by beating Ring and the Gee-Gees on Ottawa’s home court in last year’s OUA final.

“It was weird during the banner ceremony, remembering they beat me last year, but I’ve moved on,” said Ring. “As a team we’ve had a couple laughs over it, but I don’t really think about it now.”

Repeating as champions will be tough for the Rams, especially after watching Siki Jez, Mariah Nunes and reigning CIS Player of the Year Keneca Pingue-Giles all graduate  following the team’s historic season.

“We’ve tried to not to have the mindset of descending this season, just because of how different our team is now,” said head coach Carly Clarke. “We know we just need to focus on making our current situation special.” 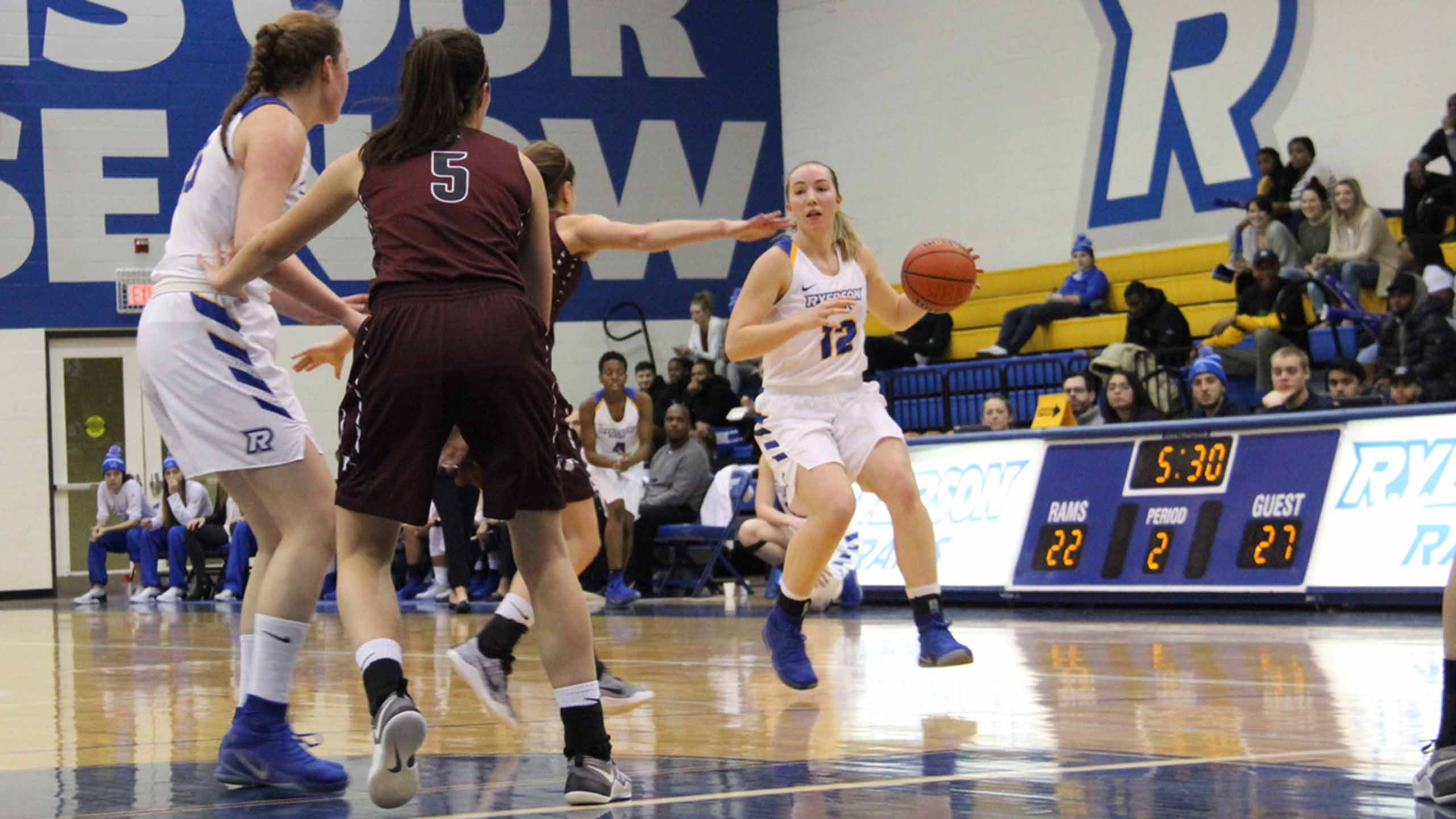 Having won an OUA title and a CIS bronze medal with the Gee-Gees in 2012, Ring knows the pressure of being the “team to beat.” While the Rams have felt the sting of losing both of their co-captains in Pingue-Giles and Jez, they’ve benefited from Ring’s influence as an experienced fifth-year guard playing for a team that’s hungry to stay on top.

“She definitely plays with an edge and with some grit,” said Clarke. “Something that’s making everyone around her better as well.”

Ring has emerged as one of the Rams’ top floor generals—a player who leads by driving offence. She leads the team in assists, steals and minutes played, while also sitting second in scoring with an average of more than 15 points per game. She’s one of two Ryerson athletes to be named OUA Athlete of the Week so far this season, an honour she earned in November. She’s stayed hot since then, putting up at least 10 points in each of her last 10 games as of Jan. 31, including a pair of 20-point performances and a double-double in Ryerson’s recent comeback win against the Brock Badgers at the Meridian Centre in St. Catharines, Ont.

With relatively young third-year centre Paska driving Ryerson’s offence from the middle of the court—leading the team with over 18 points a game—Ring has helped handle the pressures of leadership while giving the Rams a lethal offensive alternative to Paska. Both will be essential if the Rams hope to defend their OUA title and claim a national championship.

“I started building chemistry with Kellie in the summer ‘cause I wanted her to be comfortable,” said Paska. “Now she’s the one giving me energy in huddles, and really stepping up as one of our leaders.”