Ryerson’s men’s hockey team won 6-3 over the UOIT Ridgebacks in a hotly contested afternoon affair at the Mattamy Athletic Centre on Saturday.

The win was the Rams’ second in less than 24 hours after shutting out Queen’s 4-0 on Friday night. With a 19-4-1 record, Ryerson now has a five-point cushion at the top of the OUA West and leads McGill by a single point for first overall in the OUA.

Erick DeLaurentis scored the eventual game-winner with just under 90 seconds to go in the first period to give the Rams a 4-0 lead after twenty minutes.

Already a physical affair in the first period, the game’s intensity increased tangibly following a hit on Ryerson’s Lucas Froese. Froese was down for several moments after a pair of Ridgebacks players hit him into the boards from behind with one of them appearing to make contact with the back of his head. No penalty was called on the play. Froese went to the dressing room but returned in the third period.

The fact that all four refs don’t call it is disappointing,” said Rams head coach Johnny Duco. “But we’ve watched it on video and it’s a blatant head check that they’re trying to get out of hockey.

“I talked to them and they said they’d take a look at it.” 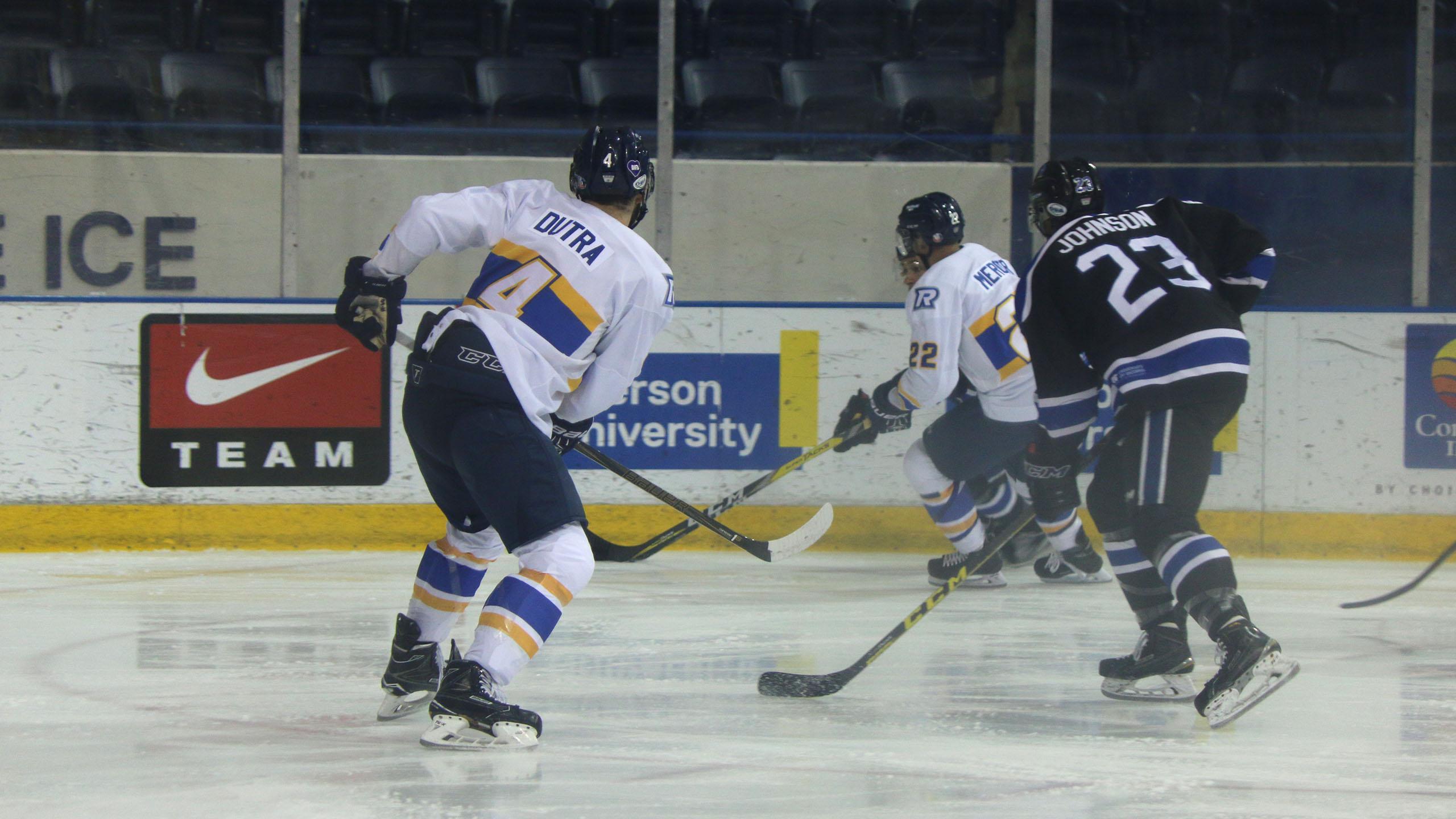 Malik Johnson got the Ridgebacks on the board shortly after Froese went to the dressing room, jamming the puck past a sprawling Taylor Dupuis after the Rams goaltender made the initial pad stop. Dupuis was Ryerson’s best player, continually making flurries of saves as UOIT sent initial shots through traffic before driving the net. Dupuis finished with 33 saves, including 15 in the third period when the Rams were outshot 17-6.

Ryerson’s Josh Sterk went to the box for roughing after the whistle following the Johnson goal, then took coincidental minors for interference and unsportsmanlike conduct a few minutes later to send UOIT to a fruitless four-minute powerplay. Sterk accounted for six of the 26 penalty minutes handed out.

Vince Figliomeni and Aaron Armstrong had even-strength goals in the first period for Ryerson while Daniel Clairmont added the team’s fifth shorthanded tally of the season, good for second-most in the OUA. John Carpino restored Ryerson’s four-goal lead seven minutes into the third period before the Ridgebacks scored two goals in under three minutes to get within two. Mitchell Theoret scored the final goal of the game on the powerplay with just under six minutes to play.
UP NEXT: The Rams close out their five-game homestand when they host the Lakehead Thunderwolves on Thursday, Feb. 2 at 7:15 p.m.