Her name is Marsha. She’s introduced as the next person to read a portion of her story, titled “Red Clay.” Her quiet voice becomes succinct and calm.

The packed art gallery falls silent. “Don’t touch me,” she cries, her red curls shaking with her voice as she recalls the cancer, how she felt when she was told she had months to live, and the doctor’s cold hands on her spine. She finishes speaking. A small smile appears on her face as the crowd applauds, despite being told to hold off until the end. They’re here for the launch of the annual Sister Writes literary magazine.

Lauren Kirshner, a published author and the founder of Sister Writes, announces the next reader.

As one of Toronto’s only free creative writing programs for women, Sister Writes offers opportunity for cis and trans writers affected by homelessness, trauma, mental health issues and addictions, or women facing life transitions, to receive mentorship and find their voices.

Conceived in 2010, Kirshner pulled inspiration from The Parkdale Street Writers, a creative writing program for at-risk youth, and an eight-week poetry salon she ran at The Centre for Addiction and Mental Health (CAMH). When she learned there were no free creative writing programs for women in Toronto, she approached Sistering—a community agency that aims to create a safe, non-judgmental space for women at risk—to form Sister Writes. While the two groups share similar names, they are separate entities that rely on mutual themes of women supporting women as a way to communicate. 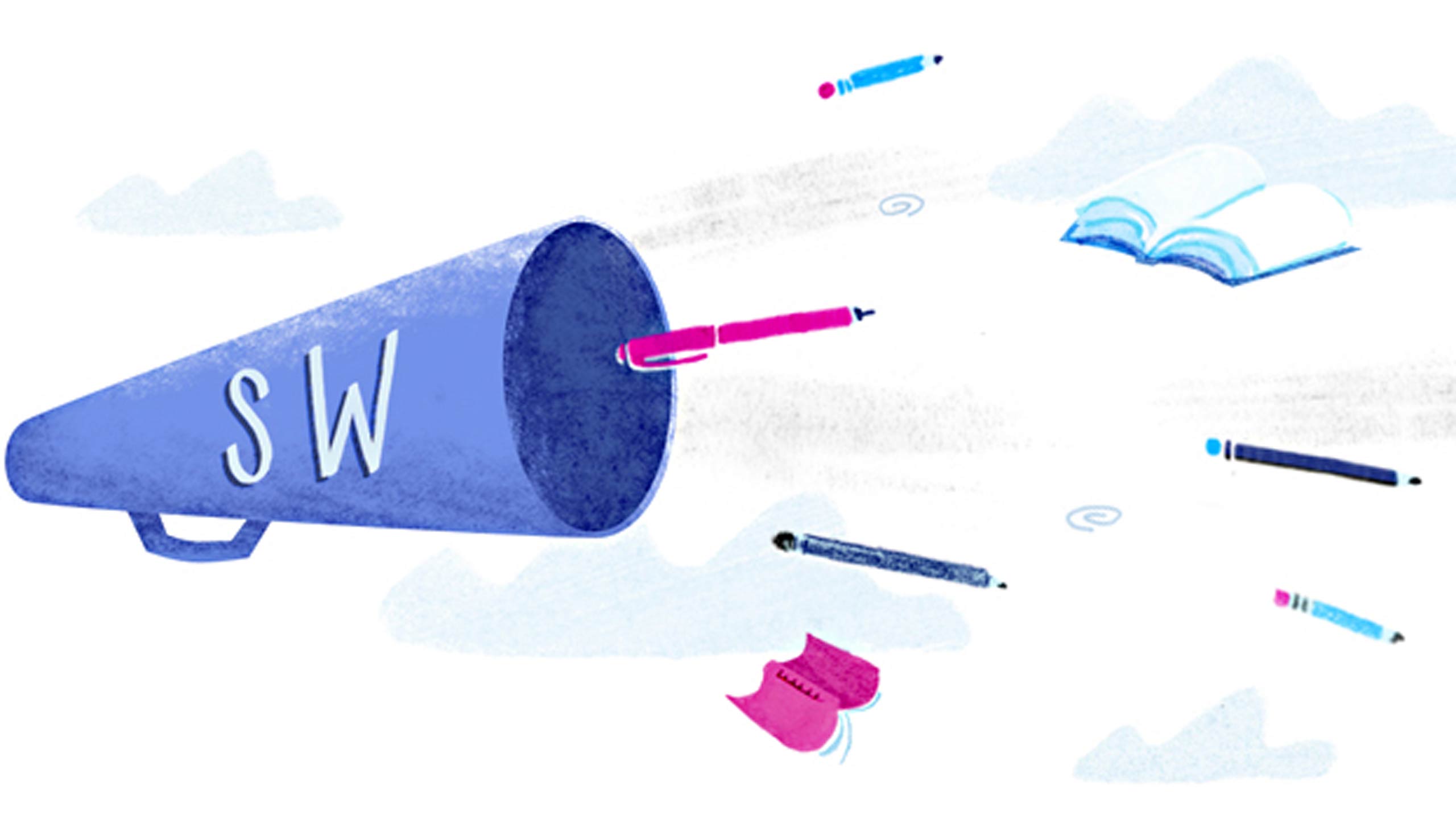 Since 2013, Kirshner has taught creative writing at Ryerson. Similar to the class she teaches on campus, Sister Writes is broken up into 12 weeks, with each week focused on a different aspect of the writing process: from creating rounded characters, to editing, to scene writing, to perfecting basic sentence structure. The registration for the workshops, running three times a year, opens six weeks ahead of time. The only reason someone could be turned away is if a session is full.

Writers are published in the Sister Writes end-of-year magazine, which includes a collection of short stories and poems. For the first time this year, the program launched two issues due to the increase in content. The launch took place on Jan. 17 at the Art Square Cafe and Gallery, across the street from the Art Gallery of Ontario.

The cover art for the magazine is done by a Sister Writes participant and the issue is published through Coach House Press in Toronto. “It was amazing to have watched that creative spark develop into this beautiful celebration of their stories,” Kirshner says. 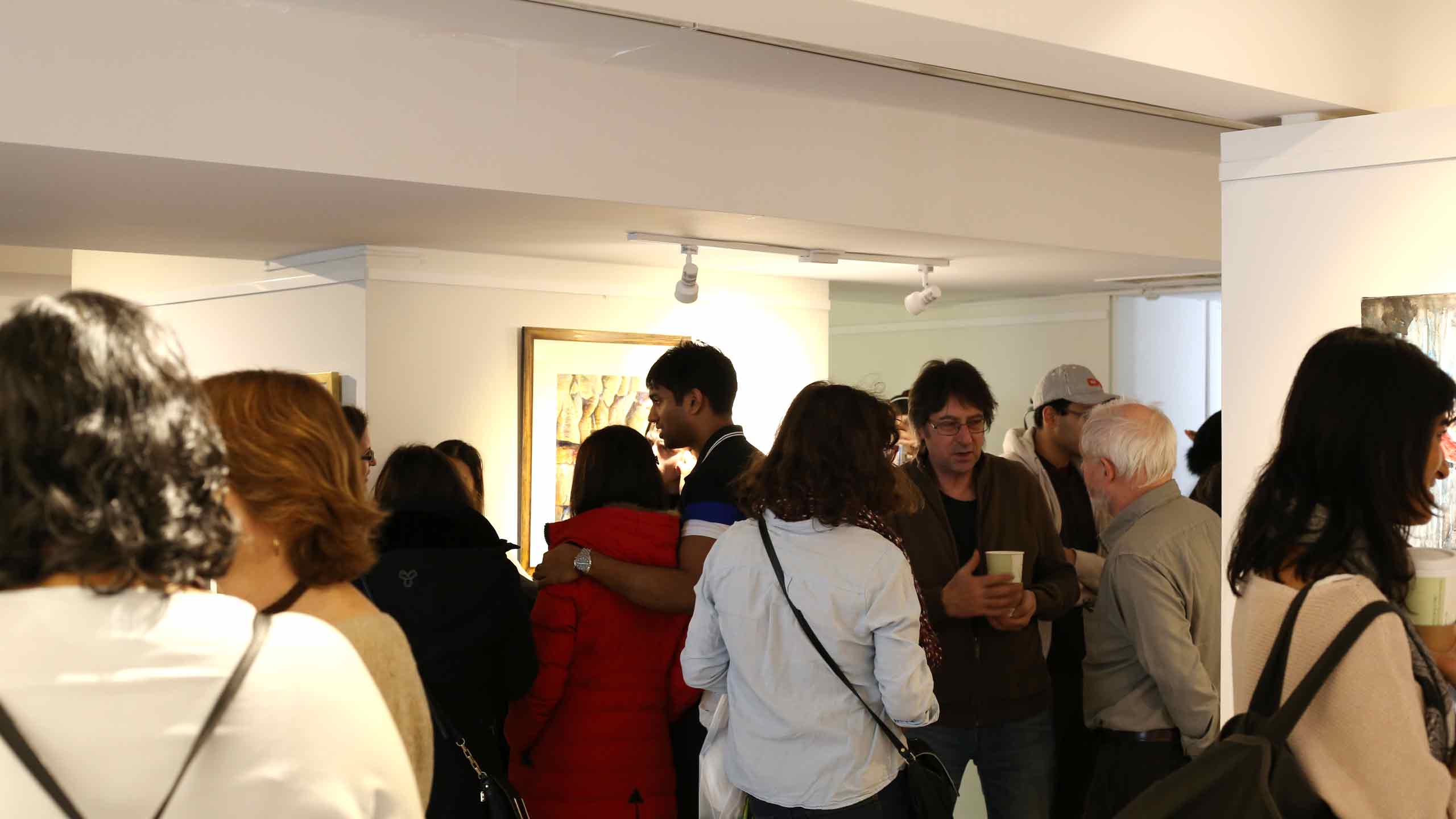 On a Tuesday afternoon in early December, I attended the Sister Writes program at the Gladstone Public Library at Dufferin and Bloor streets. A carpeted ramp off the main lobby leads to a room filled with tall glass windows overlooking rows of library books. Nine women who vary in age sit at four long tables connected at the ends, creating a chunky zero. At the front of the room is Kirshner. She’s wearing a grey threaded beanie and pink cable knit sweater. Her presence is warm and inviting. She smiles, her dark brown hair moving as she chats with some of the women before the workshop starts.

This week’s session begins with a discussion about finding a distinct voice. A woman wearing a multicoloured scarf around her shoulders is called up to talk about her writing style. Her name is Cindy Maguire. Laughter lines punctuate her smile as she glances down at her spiral bound notebook. She loves poetry, and describes her words as lyrical. Maguire currently runs the Sister Writes blog.

“I had thought about writing for so long, but I think I had always been fearful about doing something specific about it,” Maguire said. “I got packaged out of a job I’d been in for 11 years and I had almost a year to figure out what I wanted to do. I figured out it was time to pay attention to my writing.” 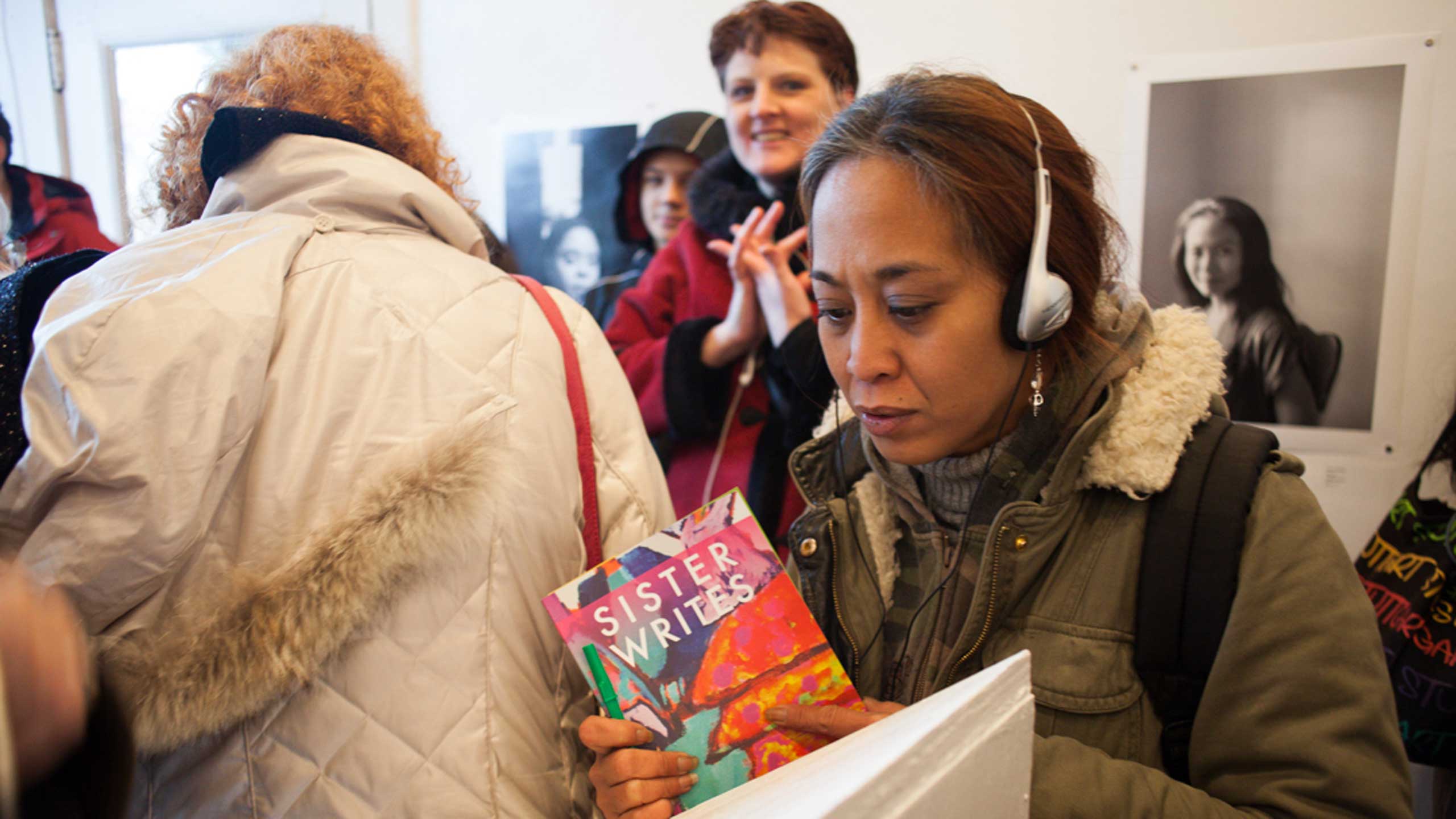 Maguire initially took a separate, three session creative writing workshop that Kirshner was running at the Gladstone library. When a friend, who Maguire created a poetry circle with, encouraged her to join Sister Writes, she was surprised to see Kirshner at the workshop. “It was just one of those things where the stars align, you know?” she says.

In a recent entry on the Sister Writes blog, Maguire writes on her experience coming to terms with what she describes as a “writing funk.” She cites Jack Kerouac’s rule 18 from his list of beliefs and techniques for writing and life as a source of inspiration: “Work from pithy middle eye out, swimming in language sea.” Maguire focuses on the American novelist’s use of the word “pithy,” describing it as the need to pay attention to your inner voice. “That unguarded raw part of you. When you do, the necessary words will be there,” she wrote.

Sister Writes acts as an umbrella for five distinct programs, each with a different experience tailored towards an aspect of the community it serves. Participants have one-on-one mentorship access and are able to work with experienced writers. Sister Writes also offers a facilitation program, where experienced participants can eventually run workshops within their own communities, as well as a community program at shelters and drop-in centres that highlights the merit of creative writing to cis and trans women. Kirshner says the community program has worked with a centre for young mothers and those dealing with domestic violence.

“It was a project that opened my eyes to the extraordinary circumstances some women are living in, and how vital it is for others to hear these stories too, to foster greater understanding about issues that shape women’s lives,” she says.

Kirshner says she plans on expanding the program across Ontario to comprise an anthology of stories from different regions and communities. She also wants to have a digital storytelling installation on their website within the year.

For Lee Shields, a practising therapist of over 15 years, creative writing and art is about creating  “new pathways,” or looking internally to engage with a situation. Likening art to expressive therapy, she looks at writing and other creative forms as a tool for individuals to use in their day-to-day lives. The fostering of empathetic relationships is a key component to a participant’s creative success, she says. 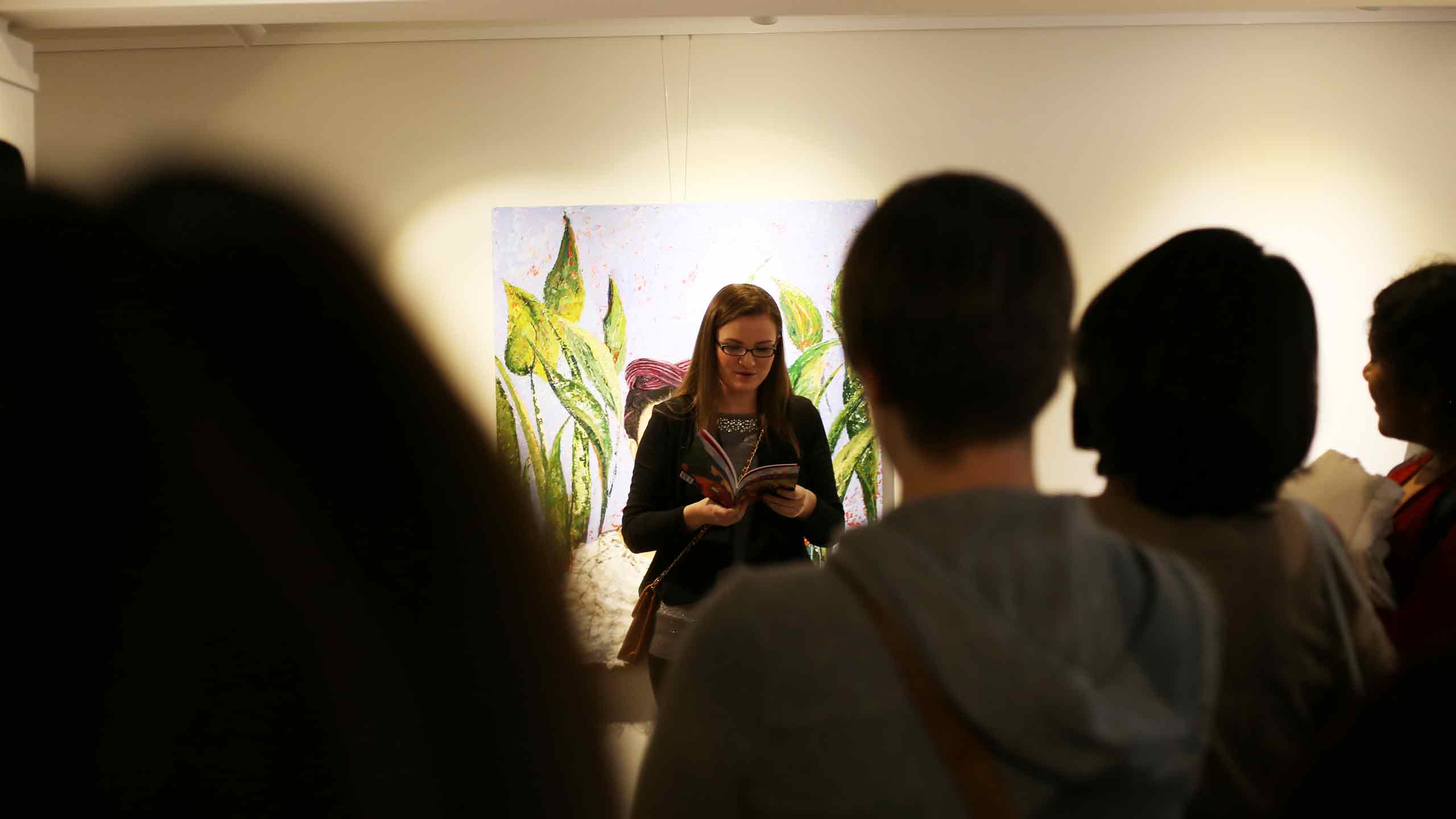 “If someone is actually willing to be with us in a way that’s vulnerable, it can be very moving—almost like the body-mind connection,” she says. “Use the writing as a springboard to check in on how you’re doing. Because if this is something [people] don’t normally do, it creates new pathways for them to explore.”

Shields’ background in psychotherapy allows her to follow her clients through the creative process, engaging them intellectually and “allowing them to be the centre of their work.” Depending on a person’s personal history—whether they’re from a broken home, or they’ve suffered abuse—Shields will use a different artistic modality to help direct the participant’s creative output.

The women at the table reach for their pens to begin a free-write session, where Kirshner prompts writers with an object, single word or short phrase. Today, she asks participants to think of a memory from their childhood—a time when they realized everything was changing, or realized they were growing up.

“If someone is actually willing to be with us in a way that’s vulnerable, it can be very moving—almost like the body-mind connection.” –Lee Shields

The idea is to force the participants to write continuously in 10 minute intervals, without stopping to overthink or edit. There are a final few questions about the prompt. “What constitutes everything changing?,” a voice calls out. “Can it be an experience from when I was older?,” another asks quietly. There’s a distinct sense of apprehension, a want to get the prompt correct. But as I look amongst the women,  I can see determination in their furrowed brows.

The room falls silent once again. The rhythm of breathing amongst the women slows as their pens move quickly across the pages. One late comer rushes in and sits to my right as Kirshner quietly explains the prompt. 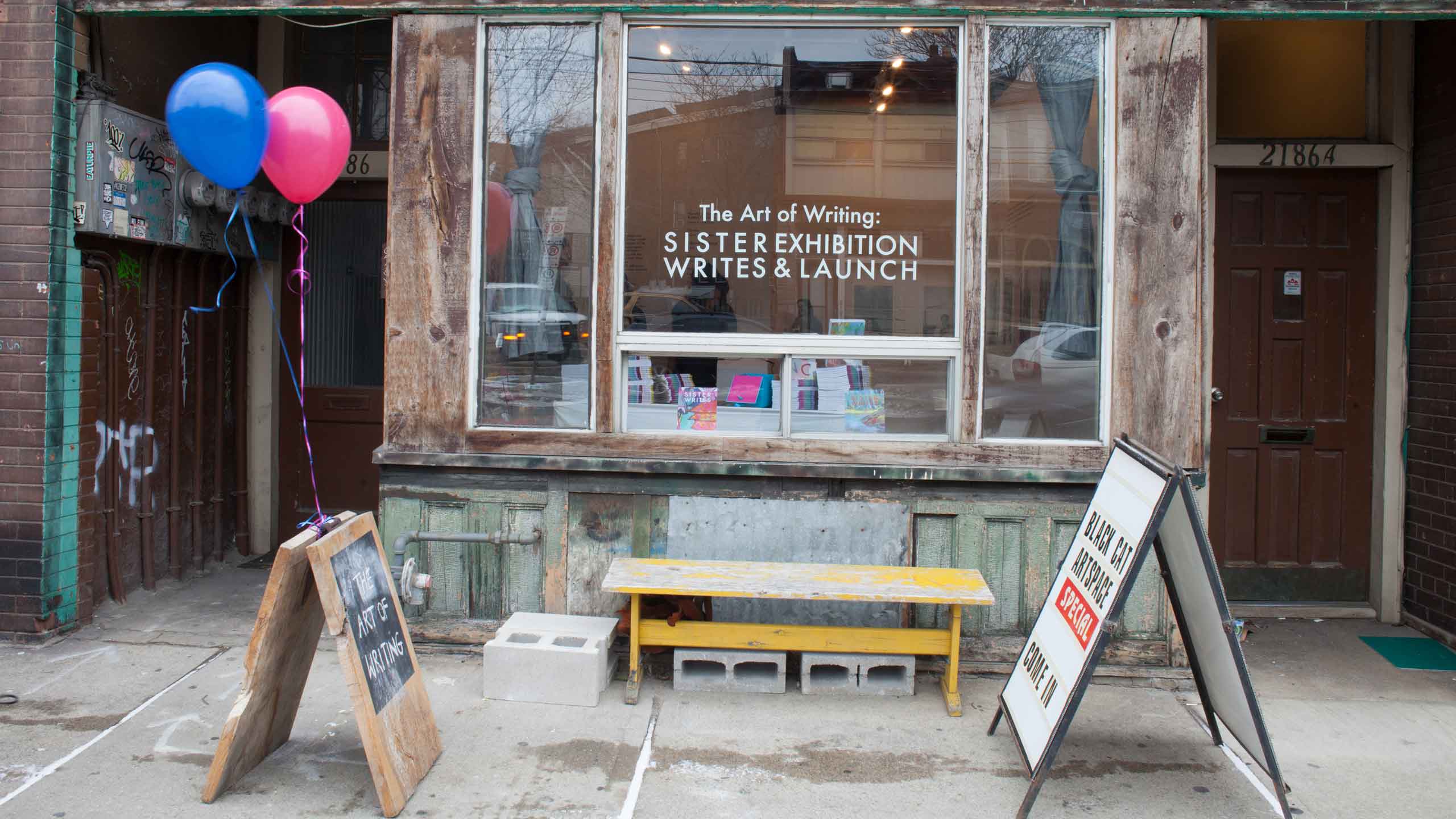 There’s Debi Lee, bundled in a puffy grey jacket and wool scarf. She pauses momentarily, her pen pressed to the page as she hesitates. With the nod of her head, she reminds herself not to stop and think. Her pen begins moving swiftly once again, and she makes up for those few lost seconds.

The tone is always set by the participants themselves, Kirshner says, adding that her main focus is on the editorial process to help writers shape their material. Participants are encouraged to share their words, but only if they feel comfortable.

For writers like Lee, the workshop helped restore integrity and dignity to her life through the art of writing.

“Sister Writes, and especially Lauren, has been a lifeline to me. It gave me ground when I didn’t have a place to stand. Transience, crises’, life … can severely disrupt and destabilize one’s perspective,” Lee says. “A woman said today, ‘We can’t really see where we are until we get a little distance away from it.’”

Throughout the free write, Kirshner moves her gaze from woman to woman. She focuses on each pen and notepad for a few seconds.

When I make eye contact with her, I sense a telepathic sort of encouragement. Short, styrofoam cups filled with coffee tremble as the table moves with the flow of words. When Kirshner announces that there are two minutes left, the scratching of ink to paper becomes more audible.

The women finish their last sentences. The disappointment is palpable because no one wants to stop.

Eronia Maria, a woman with long blonde hair and glasses that frame her petite face, places her pen back on the table. She works as a music teacher at a private school in Toronto and started creative writing to expand her abilities beyond the academic writing she’s used to.

Maria later tells me that Kirshner has helped her find the unique humour in her own life by looking at ordinary experiences for inspiration.

As I sat in this room amongst all of these different women, each with different stories, I felt a sense of unity. There was a genuine want to be involved—to support each other, and to grow creatively. Not once did writing seem like work to any of them, despite the emotional strain. With cramped fingers, challenges were raised, discussed and solved.

Here, tucked away in a Bloordale Village library, a group of women create a home where all voices are heard and opinions are valid. And through the scratching of pens, the flipping of pages and the quiet coughs of contemplation, they speak.