But the Rams took a difficult route to victory on Friday night, grinding out a 70-59 win over the Queen’s Gaels to remain undefeated at the Mattamy Athletic Centre this season.

Rams guard Ammanuel Diressa had a game-high 16 points, with exactly zero of those coming during a difficult first half for a home squad that improves to 15-1 on the season.

Queen’s came out of the gate looking smoother, quicker and flat-out better on the offensive end. As Ryerson’s best players missed three after three after three, Queen’s got easy looks in the paint to take a two-point lead into the second frame. 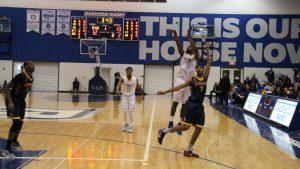 In the second, the only thing dropping for Ryerson was the energy at Coca-Cola Court.

Diressa tossed up a pair of bricks from the perimeter; Roshane Roberts missed a wide-open jumper about three feet left of the rim; and nearly every look Ryerson had in the paint was obstructed by the long arms of Queen’s defenders.

All told, Ryerson didn’t hit their first field goal of the second frame until there were less than two minutes left in the first half. Somehow, the Rams took a narrow 27-25 lead into halftime, in large part thanks to Myles Charvis and his game-high 10 first-half points.

“We’re too talented to have a full game like that,” Rana said as the team headed into the locker room. “We just seemed very disjointed in the first half.”

When the Rams emerged for the third, they still looked stagnant and frozen in the offensive end until Diressa and Queen’s star Sukhpreet Singh started trading buckets.

Diressa hit three of four shots from outside the arc in the quarter, getting timely steals and hitting forward Keevon Small with a behind-the-back feed in transition for a two-handed slam.

From that point on, Ryerson looked more like themselves.

Diressa finished with eight rebounds and seven assists while nabbing three steals as the Rams outscored Queen’s 43-34 in the second half.

Playing in his first game since Dec. 3, Adam Voll picked up four points and five rebounds in 18 minutes of playing time, giving the Rams some more size in the frontcourt.

Rana said that while Queen’s gave the Rams a run for their money and the victory was sloppy, he’ll take it.

UP NEXT: The Rams host the University of Toronto Varsity Blues on Friday, Feb. 10 in their final home game of the regular season. Tip-off is set for 8 p.m.