Rams goaltender Sydney Authier made 25 saves through regulation and two overtimes before stopping both Gaels skaters in shootout. Ailish Forfar and Alex Rodriguez both scored on their shootout attempts to seal the win.

With the victory, Ryerson sweeps the season series against Queen’s, improving to 4-2-11-3 and capturing their first win of 2017. It was Ryerson’s first win since Dec. 1. 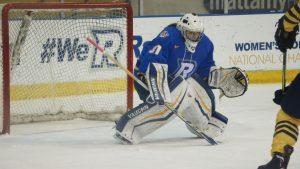 The win also the Rams a one-point edge on York for eleventh place in the OUA, twelve points back of eighth-place Windsor. Ryerson’s slim playoff hopes now ride on the Rams’ four remaining regular season games. Three of their opponents—Waterloo, Toronto and Nipissing—sit in the top five in the OUA standings.

The Rams scored the opening goal late in the first period when Alyssa Connolly buried a rebound after Queen’s goalie Claire Warren made the initial save. Warren finished with 36 saves as Ryerson outshot the visitors 38-27. The goal by Connolly was Ryerson’s first since a Jan. 11 game against Guelph. Queen’s responded barely 90 seconds later to tie the game 1-1.

Ryerson regained their advantage less than four minutes into the second period when Kryshanda Green crashed the net and scored her team-leading ninth goal of the season off a rebound from a Danelle Im shot. Queen’s would tie the game with less than two minutes to play in the period, with Jessica Wakefield netting the equalizer on a breakaway shortly after the Gaels had killed off a cross-checking penalty.

There were plenty of chances for a goals in the third period and both overtimes, but the game remained tied before the Rams triumphed in the shootout. It was the first loss in overtime or a shootout for Queen’s, who are now 4-1 when playing past regulation.

UP NEXT: The Rams will face off against the Laurentian Voyageurs on Friday, Feb. 10 at the Mattamy Athletic Centre in their final home game of the regular season. Puck drops at 7:15 p.m.