With a last-second thriller against the hometown favourites and a challenger-versus-champion grudge match that became an instant classic in the annals of Canadian university basketball, Ryerson’s quest for the school’s first national championship at the men’s Final 8 tournament in Halifax had just about everything.

Everything but the gold medal the Rams set out to claim.

“It’s just another game for us, honestly, it’s just basketball,” Filip Vujadinovic said firmly as he sat beside head coach Roy Rana at their post-game press conference on the eve of the team’s first-ever appearance in the national championship.

Vujadinovic, Rana and the rest of the Rams were fresh off a 59-58 semi-final victory over the hosting Dalhousie Tigers, one year after winning the bronze medal against the same team.

Vujadinovic had earned the game ball from his teammates and coaches after playing the game of his three-season Ryerson career, but it had taken a missed three-point shot at the buzzer from Tigers star Kashrell Lawrence to give the Rams an opportunity to win the game that no Ryerson team had ever won.

“It’s going to be a good game,” Vujadinovic finished. He was right about that second part, but not about the first. 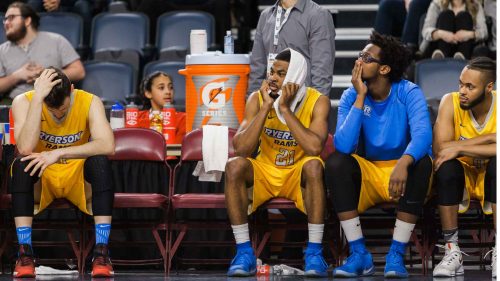 For the past two national tournaments, Ryerson had been the bronze medalists. Exactly 364 days prior to their win over the Tigers, the Rams had claimed their first Ontario University Athletics (OUA)championship—the school’s first in any sport—by overcoming a 13-point halftime deficit and shocking the Carleton Ravens, the Goliath of Canadian university men’s basketball.

One week before the tournament in Halifax, the Rams had clashed with the Ravens in the provincial championship for a second straight season. Carleton was 21-0 coming into that game, and Ryerson hadn’t won on Carleton’s home court since the beginning of the millennium.

That night, they accomplished the improbable, snapping that 17-year streak to repeat as OUA champs.

In Halifax, it had seemed a forgone conclusion that the six-time defending champion Ravens would be in the national gold medal game, and indeed they were. When the Rams punched their ticket to the championship, it took on a new meaning.

It wasn’t just another game. It was the only proper way for the tournament to end.

But a week after the Rams defended their provincial title, Carleton did the same on the national stage. It was an agonizing ending to Ryerson’s magical championship run.

“It’s going to take some time to heal these wounds,” said Rams guard Myles Charvis, a few minutes after having a silver medal draped around his neck. “But I still want to remember this feeling, because I don’t want to feel like this ever again.”

A national silver medal is a bittersweet thing; a testament to a truly great achievement, and a reminder of work still to be done. The women’s basketball team discovered  that when they won Ryerson’s first silver at last year’s nationals.

This year’s silver wasn’t the finish the Rams wanted, but it was the best in the program’s history.

The Rams finally got over the hump and into the national final. They proved that last year’s OUA title wasn’t a fluke, and that they belong in the conversation for Canada’s best team.

They raised the bar for themselves, and tasted the adversity of today that forges the champions of tomorrow.