When Nicole Titkai started curling in the fourth grade, she wasn’t strong enough to deliver a rock the traditional way.

According to Titkai, there are four steps to a traditional curling delivery: the thrower crouches down to line up their shot, they raise their hips, pull the rock toward them, then push out and release.

A curling rock is truly that—roughly 40 pounds of polished granite with a plastic handle screwed on top. It proved too heavy for the 10-year-old Titkai.

“My coach was like ‘Well, if you can’t pull it back, we’re just going to have to start with you already up so you can push it out,’” said Titkai, now 21. She added that her modified delivery eliminates the first two steps of a traditional one. “That just kind of stuck with me as my way to deliver.”

During her 11 years in the sport, Titkai has won four provincial silver medals in four different competitions, the most recent of these coming with the Rams in February’s Ontario University Athletics (OUA) championship.

That finish earned the team a berth at the U Sports/Curling Canada university championship in late March in just their second season of competition.

At both the OUA championship and the national tournament, Titkai was named a second-team all-star at the vice position. It’s an impressive achievement, especially since she’s played most of her career as a lead.

On a curling team, the lead shoots the first two rocks and then helps sweep the remaining six for their team during each end (games consist of either eight or 10 ends). Most often, leads throw their rocks with less weight, to either “guard” the scoring area or “draw” into the scoring area to gain points.

In addition to making draws, the vice, who shoots rocks five and six, needs to be able to throw with heavier “takeout” weight to knock opposition stones from play.

At last season’s inaugural curling tryouts, a shortage of players meant Titkai had to step up and fill the vice role for the women’s team. Titkai said she struggled with the change initially. Her unconventional delivery made it difficult to generate the power needed for bigger-weight shots she has to throw as a vice. 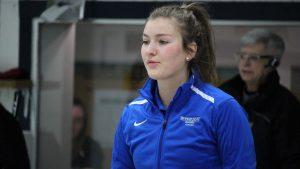 “I don’t start [all the way] down… so I need to figure out a way to generate enough speed,” said Titkai, who is in her third year at Ryerson but first in the occupational health and safety program. “That’s definitely gotten a lot better over [this] season, because I’m throwing a lot more weight than I could before.”

“[Nicole’s] experience in playing the amount of curling that she did, I felt was really important to support Maggie [Macintosh],” said Rams head coach Perry Marshall about moving Titkai out of her natural position.

Macintosh is the Rams skip—the captain of a curling team that makes strategic decisions and throws the team’s final two rocks in each end.

Titkai and Macintosh had faced each other dozens of times as kids on the competitive circuit before they became teammates at Ryerson.

“You’re sleeping in the same hotel room [at tournaments], you’re trusting each other to call each other’s shots,” said Macintosh. “So that has a huge impact on the relationship.” 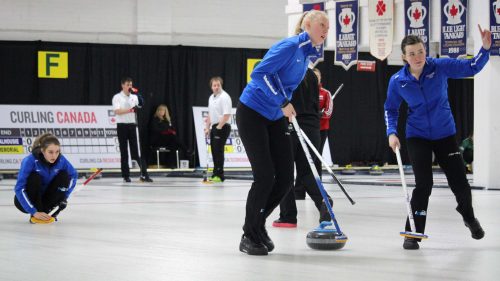 Titkai agreed that another season together has translated to better in-game chemistry.

“[This season] was a lot better than a year ago,” Titkai said. “I have more trust in her, and I have the confidence in her throwing the last rocks and making them.”

The Rams went 2-5 at the national championship, missing the playoffs. But Marshall was quick to point out that the Rams’ team shooting percentage (72 per cent) was second-best in the eight-team field, and that three of their losses were by a single point.

Going into next season, the vice position seems to be Titkai’s to lose. “A third year of Maggie and Nicole being together would be invaluable,” said Marshall. He added that their pre-existing chemistry will be a “high hurdle” for a challenger to overcome, even if they do have more experience at the position than Titkai.

“I don’t see our back-end lineup changing anytime soon.” said Macintosh. “Nicole is a good vice and I wouldn’t want her playing anything else.”