The Ryerson Students’ Union (RSU) had its final board of directors meeting of the year before its Annual General Meeting in April.

A motion was passed calling for an official statement to be released within 24 hours that includes a “comprehensive report” of 6 Fest for the board.

This report would include a list of ticket transactions, the list of submissions for refunds, list of attendees of the concert and a transaction report of the $80,000 deposited into the Singh’s personal bank account to be given to the board and financial controller.

The motion also called for Singh to release the password to the Eventbrite account that holds this information to the financial controller because as of right now, Singh is the only person who has access to it.

This motion was presented at the last board meeting on March 2, but quorum was lost when the meeting had to move locations due to the meeting taking an extra hour for discussion of the motion.

Statement demanded for how $1M deficit will impact group funding—PASSED

The main topic of discussion was a motion in which student group funding will be affected due to the 6 Fest deficit of $1 million, previously reported by The Eyeopener.

He added that there will be no funds for any big events to imitate this year’s such as 6 Fest for next year. He also said the expenses next year will probably just break even with what they have available in their fund reserve.

yikes @VictoriaMMorton just left the board meeting and didn’t take her dog Louie with her :/ @theeyeopener 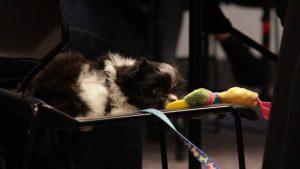 Proposal for separate student union for grad students—NOT VOTED ON

A motion was put forward to have grad students represented by the RSU separate from the student union to have their own union because they have different needs.

The motion noted that the potential new student union should maintain membership with the Canadian Federation of Students.

The mover of the motion Carolyn Qin was not present at the meeting, so it did not get voted on.

A group focusing on geopolitics was ratified as an official student group. The group will have club meetings where discussions will take place on geopolitics and foreign affairs.

Due to a complicated and unusual formatting of the budget that the RSU currently has, such as the Health & Dental Plan funds being included in the RSU’s general cash flow—Muthreja said at the meeting that he will do a new budget presentation by the end of the year to make the information more accessible to students who may not know how to read a budget.