Sitting on a stool in a dimly lit dive bar, *Jess Jenson had one thing on her mind: she wanted to blackout. She was alone, but found an odd sense of comfort in the strangers around her. With every drink, her overwhelming thoughts of sadness began to quiet. With every drink, she felt more numb.

Jägerbombs lined the counter. She downed three or four before deciding it was time to go home.  As she stumbled out the door into an empty parking lot, she looked around for her blue, two-door Honda Civic. While fumbling for her keys, three strange men approached her. They told her she was in no shape to drive.

Her recollection of what really happened on that blurry night in 2008 is spotty, but every time she thinks back to it, more details surface. She remembers the back seat of a strange car, an isolated ATM, and waking up in a place she’d never seen before. The next morning, in a haze of hungover confusion, she realized her bank account had been completely emptied.

Drinking was a habit that followed Jenson around for her entire adult life. Balancing her studies at university seemed impossible, so she dropped out on two separate occasions. There was a two-year period when she found herself without a stable place to live, often spending nights curled up in her car. She would go to bed freezing and wake up drenched in her own sweat. As she lost hope and motivation, she turned to cocaine for a few minutes of relief. Her mom was heartbroken that she was living this way. 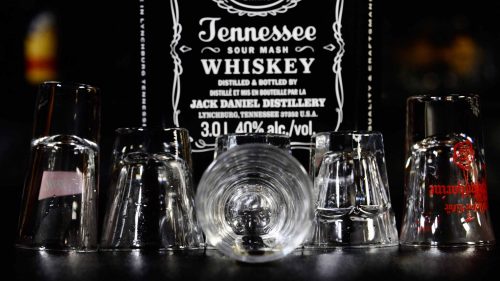 When she developed suicidal thoughts—the first of hundreds to come, partnered with a handful of attempts throughout the next decade of her life—she checked herself into a hospital.

Drinking is ingrained in social culture, especially among young people. For students, it’s a rite of passage in entering adulthood, and for young adults, a coping mechanism for financial and daily pressures. But because of the normalization of therapeutic drinking, it’s become far more difficult to recognize the early stages of addiction.

Alcohol is the most commonly abused substance in Canada. According to Health Canada, individuals between the ages of 15 and 24 are three times more likely to engage in heavy drinking. The World Health Organization also found that alcohol abuse ultimately results in approximately 2.5 million annual deaths worldwide.

Stephanie Cassin, a psychology professor at Ryerson, said addiction is hard to spot among university students because it is so prominent in their day-to-day lives.

“It is such a normative behaviour that it’s almost hard for your addiction to stand out because everybody, during frosh week for example, is often engaged in drinking and all those other activities that go along with starting university,” Cassin said.

Cassin is a registered clinical psychologist with research interests in addictive behaviours that affect university students. She explained that students often realize that alcohol can be an effective short-term coping tool, but this temporary relief can quickly become a reinforcing cycle. It’s important to keep in mind that those suffering from mental health issues are at a greater risk of alcoholism, Cassin added.

For instance, Cassin explained that if someone is suffering from depression or anxiety, they may end up drinking as a way to improve their mood or relieve anxiety. But if they’re suffering from alcohol addiction and are experiencing social isolation as a result of that, it can lead to the increase of depression symptoms. Likewise, if a person is withdrawing from alcohol, it can lead to symptoms of anxiety. In order to recover and become sober, Cassin said intrinsic motivation is needed to make a drastic change—people need to realize on their own that alcohol is causing more harm than good. But this is a difficult step to make within university culture.

Jenson faced many setbacks in both her personal and professional life that contributed to her alcoholism. In 2004, when she was 16, her older brother went missing for six years. He was later found with a debilitating mental illness, which was linked to his disappearance.

“I wanted to die everyday and hoped it would happen through drugs or alcohol,” Jenson said.

At 19, Jenson was diagnosed with post-traumatic stress disorder, major depressive disorder and general anxiety disorder. These diagnoses were made after she attempted suicide.

It wasn’t until her early adult life while she was in and out of school that she became a daily drinker. During a six month stretch in 2009, she often consumed a bottle of wine—sometimes two—each night. Other days, she’d purchase a bottle of Jose Cuervo tequila and drink half of it all at once, alone. Going out was a different story. She’d down three or four Irish Car Bombs, Jägerbombs or double shots of tequila back to back until she blacked out.

“My go-to was: ‘What can I drink as much as I can—as fast as I can—to black out and not feel anything anymore?’”

When she was ready to quit, she thought, “there was nothing left except to die.”

“It’s either die, go to jail, or get sober. When I chose to do it, there was no going back,” she said.

In May 2010, Jenson began attending LGBTQ Alcoholics Anonymous meetings—90 meetings over 90 days. She spent a lot of time crying and openly sharing her experiences with a circle of strangers who welcomed her at her worst. They always greeted her with hugs. For the first time in years, she felt genuinely accepted.

She wanted to stay sober, so she followed careful instructions from her mentors: she made her bed everyday, she tried to be accountable, she volunteered, sponsored another person in recovery, and made amends with family and friends. But most importantly, she forgave herself.

Jenson came to Ryerson because she “knew she couldn’t waste her life.” She felt like she needed stability, direction, and purpose to keep her motivated. Since her experience dealing with alcoholism, she founded a post-secondary student-run recovery group for alcohol and drugs at Ryerson—one of the first public groups of its kind in Toronto, according to Jenson. The group has weekly meetings on Friday evenings in the Student Campus Centre.

Tim McConnell, a former Ryerson student, battled opioid and alcohol addiction as a teenager. In 2008, McConnell started attending Ryerson to study film production and lived at a recovery house in Toronto.

Being 21 and sober for about two years prior to attending Ryerson, McConnell was past the stage of attending parties on campus, but instead wanted to develop friendships and relationships with other students. However, alcohol played a different role in McConnell’s overall university experience.

“I was in a very different place in my life because I wasn’t interested in … going to bars or hanging out at parties where there was going to be a high level of intoxication,” McConnell said. “I didn’t develop a lot of relationships with other Ryerson students.”

McConnell is part of the peer-led initiative Pieces to Pathways, which is a support program for LGBTQ+ youth who suffer from substance use.

“It’s not an active fight at this point,” McConnell said. “But recovery and being in recovery is still central to my life.”

Recovery is something that is often not spoken about openly amongst students.

Last semester, Jenson went to speak to a class on recovery communities in universities. She wanted to start a conversation on substance abuse and remembers asking a room full of students whether they’ve ever been drunk, used drugs or had seen drink specials or alcohol advertisements on campus before. Nearly every person in the room raised their hand.

Next, she asked the group if any of them had ever blacked out when drinking or using drugs. A smaller number of people hesitantly raised their hands.

Finally, she asked how many people had heard about on-campus recovery groups or any type of resource for alcoholism in their first year. The students sat still and silent. No hands were raised, but Jenson wasn’t surprised. She said education around addiction and substance abuse needs to be a more prominent discussion in university, especially during frosh week.

According to Brandon Smith, the residence life and education coordinator for Housing & Residence Life, seminars on alcohol safety are presented in community meetings after move-in day and during orientation week. Expectations on alcohol consumption, community standards and the importance of safety resources are a few topics surrounding alcoholism that are discussed during these meetings.

“We try to break down the barrier of people not calling a resource out of fear of getting in trouble versus accessing the support needed,” said Smith.

Ryerson has also set in place certain rules intended to control alcohol abuse on campus. RU Student Life kicked off its third annual #14DaysDry campaign on Feb. 26. It aims to increase awareness and support for those dealing with substance addiction while also challenging the community to be fully sober for two weeks.

Ryerson is one of 33 Canadian universities that have signed onto the Postsecondary Education Partnerships — Alcohol Harms, a partnership between Canadian universities and the Canadian Centre on Substance Abuse. The group’s mission is to reduce alcohol related harm on campuses. Their next meeting to share strategies will take place in Ottawa this June as part of an annual conference.

“I think with any type of substance abuse or addiction it is always difficult for certain people to become comfortable at the beginning,” Jenson explained. “A lot of times this is their first time publicly receiving help or asking for help surrounding their history of drug and alcohol abuse. It has been a slow start.”

For this very reason, Jenson thinks having an on-campus support group that students can turn to without fear of judgement is so valuable.

Each one of her session begins with meditation and they have open forum discussions if anybody has certain topics they want to discuss. Due to issues with outreach and stigma, Jenson’s current group is small, with around three students regularly attending meetings last semester. Some people come for only one meeting, which she said is normal in the the world of recovery from drug and alcohol addiction—especially for those who are just realizing they have a problem.

Meetings are also open to family and friends of those who are struggling. “It affects everybody, not just the one individual,” Jenson said.

Recovery goes beyond abstaining from alcohol and drugs. It’s about piecing your life back together and restoring your goals, which isn’t easy to do when it feels like you’re rebuilding from scratch. For Jenson, by pushing herself in school and maintaining a strong support group, she began to gradually feel like herself again.

A fews weeks ago, Jenson was sitting in a streetcar on Queen St. W. heading to Ryerson. She looked down at her phone to see a missed call from a familiar number with an American area code. It was an emotionally exhausting day and she was really hoping for good news. Flustered, she fumbled the buttons and waited for someone to pick up at the other end. Each ring filled her with more and more anxiety. But it was the news she had been waiting for—she got accepted for a university doctoral program. Her eyes welled up and a smile stretched across her face. “I did it,” she thought.

“All of this hard work, this constant struggle, the questioning of ‘Why am I here?’ and ‘Why am I still doing all of this?’ was answered in that one conversation,” she said. “Recovery is the chance for the life I’ve always hoped for but felt I wasn’t good enough to have.”

*Name has been changed for anonymity.