Leslie, the skip of Ryerson’s men’s curling team, had been watching professional curlers competing at the Mattamy Athletic Centre in the WestJet Players’ Championship for most of the afternoon and evening. A fan of the Toronto Blue Jays “since before they were good,” Leslie turned away from the ice to try and catch the Blue Jays’ game against the Baltimore Orioles.

“They have all these TV screens and they’re showing Pittsburgh and Columbus [the Penguins and Blue Jackets, facing off in the Stanley Cup Playoffs]?! And not a single one for the Jays,” Leslie said.

“Who even cares about Pittsburgh and Columbus?” he said, turning back around to the ice.

On Saturday night, Leslie, a fourth-year urban and regional planning student, called his final game as the Rams skip. Playing on the same ice used by the pros, Leslie and the Rams blew out the Humber Hawks 12-5. With the women’s team defeating Humber 7-2, the Rams defended the Rams Challenge Cup, decisively winning the two-game aggregate score 19-7.

After the Friday evening draw of the Players’ Championship, Leslie sat down to answer questions from The Eyeopener.

Q: You grew up in Metcalfe, Ontario, a small town [fewer than 2,000 people per the 2011 Census] near Ottawa. What brought you to Ryerson and the big city?

SL: It was my program. My program is only offered as a professional degree here and in Waterloo, so it kind narrowed down the places I wanted. But looking back, Ryerson’s the place to be for urban planning and to learn about it, there’s plenty of problems with Toronto and plenty to talk about.

Q: What drew you to urban planning, and how did you find out about it in the first place?

SL: In Grade 11 I initially wanted to go into civil engineering. I enjoyed how cities were built, I had this big LEGO set when I was younger that we built into a city, which was pretty cool. But I took Grade 11 chemistry and quickly realized civil engineering was not the right thing for me, or anything that involved chemistry in general. Urban planning is a largely geography-based program, although it’s kind of a mish-mash of everything. It’s even more on the city building aspect than civil engineering was. I kind of stumbled on it by accident, but I’m happy I did.

Q: You’re always wearing a baseball hat when you’re curling, and you’re wearing them a lot of the time off the ice too. When did you start really having a thing for hats?

SL: Oh God. Elementary school, I think it started. I liked NASCAR as a kid, and my dad had this old NASCAR hat that was kicking around and I just started wearing that. And then I liked it, I just got used to wearing it. I can’t remember the last time I really curled without one. Every once in a while I curl without a hat but you kind of feel naked on the ice (laughs). And yeah, it just kinda started there, and I don’t even think about it anymore, I’ve had a hat ever since.

SL: I can’t think of anybody before that who would’ve worn a cap, like a baseball cap, on the ice. I guess you could call it a watershed moment, maybe. We haven’t had another Olympics since then, so it’ll be interesting to see. Maybe that’ll be a trend where in order to get to the Olympics you’ll have to have somebody on your team wearing a hat. I hope that’d be the case. I guess 50 years ago they had (flat caps), they used to wear those before, so who knows (laughs). A hat-wearer can dream, right? 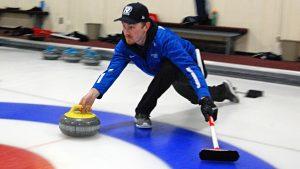 Q: You got your Rams hat through a Twitter interaction with Ben Rich, the head coach of the baseball team. Had you ever met Rich or talked with anyone on the team before then?

SL: I had not. Perry (Marshall, the head coach of the Rams curling program) developed a relationship with Ben, he reached out to him because (the baseball team) was in the same situation as the curling team was in a couple of years ago. They were joining as a competitive club and they wanted to jump into OUA competition right away. Perry posted a picture from the Rams curling account of me in the Dodgers hat and Ben saw that, and that’s when he mentioned the hat. And of course I wasn’t going to say no to a free hat. So the following week I just stopped into the MAC and picked it up, which was very nice of them to do that.

Q: Both baseball and curling are outside the “Big Four” sports at Ryerson (hockey, basketball, soccer, volleyball). Do you think it’s important for the “smaller” sports to look out for one another? Do you feel any common ground with your experiences with curling and the experiences of the baseball team?

SL: One of the guys who actually tried out for curling this year was on the baseball team. Knowing what we went through last year, and knowing that they went through the same thing, you kind of understand, or at least I understand, what they had to go through. And I can respect some of the struggles they’ve been through the past couple seasons, I know they had some trouble finding a field for a little while. 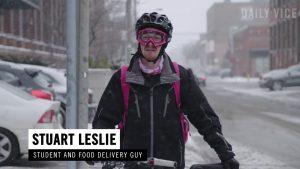 Q: You were recently profiled in a Daily VICE video about your life as a Foodora bike courier. It looked wicked cold that day you were filming. How long were you out for that day?

SL: We were out there for half an hour, 40 minutes or so. It was very windy where we were, it was near King and Dufferin [where VICE’s office is located], and the road was a wind tunnel down to the lake. The camera guy had these thin little gloves on, and he didn’t even have a hat or anything. The worst part was when we started filming, I was looking into the camera and I didn’t have my goggles on and I could barely keep my eyes open because the snow was blowing into my eyes. So I asked to put the goggles on, and they thought it might add to the video, so I was happy I was able to do that.

Q: You play your last game as a Ram in Maple Leaf Gardens. Did you ever think that Rams curling would get to a point where you could say that?

SL: Probably not. I thought maybe even if the team didn’t happen that there would be a way I could get to throw a couple rocks on the ice. But I never thought when I first reached out to the athletic department asking about a team that my last game, let alone that I’d even be playing a game as a Ram, would be on home ice, under the lights, on world-class ice. It’s probably the perfect way to go out, because you never know when you’re going to get another opportunity like this again, or if I ever will get to curl on ice like this again.

Q: There are other clubs at Ryerson – rugby being an example – that are farther behind in their path to being recognized and getting funding from the athletic department than curling is. If you could talk to the students who are pushing for that recognition, what advice would you give them?

SL: They’ve got to find our Perry. Somebody who will get behind it fully. We as students can only go so far with things, we kind of need that helping hand, and Perry was that helping hand for us that really took our passion for creating the team and made it a reality. He took the steps that needed to be taken to get the team through the athletic department. They need someone who can fully help them through the process.

Q: Finish this sentence: There is absolutely no way you can be a good curler if you do not have…

SL: A level head. If you can control your emotions you’ll be in a much better position to win a game when it’s all said and done. It’s not easy to do, and it’s not something you can do by yourself, you have to have the support of your teammates around you to create that atmosphere. You have to try not to ride the roller coaster. You need to keep it flat, keep it level.