After spending a season as an assistant coach for the NBA Development League’s Maine Red Claws, former Ryerson coach Patrick Tatham is returning to an Ontario University Athletics (OUA) bench.

Tatham spent six seasons on the Rams coaching staff, leading the team to its first OUA championship in 2016 when he served as interim head coach.

Now, Tatham will try to do the same as McMaster’s bench boss.

Last season, McMaster finished with an 8-11 record under Amos Connolly, who will remain on the Marauders staff as a recruiting coordinator and player development specialist. Over seven seasons under his tutelage, Connolly’s Marauders teams accrued a 151-66 record.

“I’ve got a tall task ahead of me,” Tatham said in a statement on McMaster’s website. “The hi
story at McMaster in men’s basketball is deep, and I used to dread coming to Hamilton to face the Marauders.” 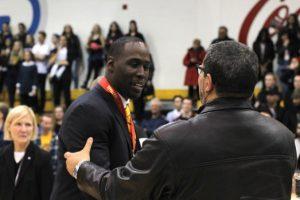 During his single season as the Rams’ coach, Tatham led Ryerson to a 17-2 record in the regular season, the top finish in the OUA. For that, Tatham was named the men’s basketball coach of the year in both the OUA and CIS.

Roy Rana, under whom Tatham coached for Ryerson, expressed excitement when his former assistant got the gig with Maine last year.

“Of course I’m gonna miss him,” Rana said in October, as the season neared. “I hope he’s gonna miss me, too. But it’s all positive. It’s all for good reasons that these changes happened.”

Mutual admiration aside, one thing is certain: Under Tatham, McMaster will be a formidable opponent, and Ryerson shouldn’t expect any less.