Led by Ryerson Rams head coach Carly Clarke, the U19 Canadian women’s basketball team earned bronze at the FIBA U19 World Cup on Sunday with a 67-60 victory over Japan.

The third-place finish is the best result the U19 Canadian women have ever had at the World Cup, previously coming in fourth at the 2009 tournament in Bangkok.

For Canada’s women’s basketball program, the bronze in Udine, Italy is the first podium finish at any international event since 2012, when the U17 women’s team came in third at the World Championships.

“Incredibly proud of this team and this accomplishment,” Clarke said in an official Canada Basketball statement. “Following a tough loss last night, it[‘s] sometimes hard to bounce back within a day.”

One day earlier, Canada fell 65-41 to Russia in their semifinal game. Clarke’s squad came out flat, allowing the Russians to head into the second half with a 26-point lead that was never relinquished. “Russia came out very prepared, shot well and just outplayed us,” Clarke said after the loss. “Their physicality influenced our play and we weren’t able to bounce back.” 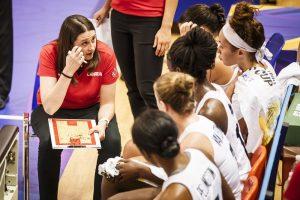 In Sunday’s game, Canada was able to do just that. Japan shot just over 13 per cent from three, and the Canadian bench came through with 25 points. Despite Canada’s ball control struggles (19 turnovers), the team still managed to hold the lead and secure the victory.

Laeticia Amihere led them against Japan, posting 13 points and 10 rebounds on her way to being named to the tournament’s FIBA U19 All-Star Five.

“It truly was a complete team effort to bring home the bronze medal,” Clarke added.

“We are so happy to be leaving here with the bronze medal,” said Alyssa Jerome, Canada’s captain and a six-foot-two forward from Toronto.

Just three weeks ago, Canada’s U19 men’s team took home gold at the World Cup in Cairo. With both U19 teams earning top-three finishes in 2017, the future of Canadian basketball appears to be as bright as ever.

“I’m extremely proud of this accomplishment for these athletes,” Clarke said. “They have worked so hard, put in so much time and effort and they one hundred per cent earned it.”