Ryerson’s men’s soccer team is retroactively forfeiting its first six games of the 2017 season after it was revealed a member of the team failed to meet the academic requirements set out for the university’s athletes.

The infringement was discovered Friday by Ryerson athletics during a routine review of the academic performances of student athletes involved in the athletic scholarship program.

As a result of the forfeiture, all Ryerson games prior to Sept. 10 are now counted as losses, and the Rams previously undefeated record drops from 7-0-1 to 2-6-0, shifting the team from first place in Ontario University Athletics (OUA) east division to the eighth seed. The Rams wins against Carleton and UOIT on Sept. 16 and 17 will stand as victories in their record moving forward.

“I’m the guy who ultimately sits at the end of the table…The error was mine,” Ivan Joseph, Ryerson’s director of athletics, told The Eyeopener Thursday afternoon.

“I look at this as an error, an opportunity to look at our systems and processes,” Joseph said. “Maybe in two months I look at this as perhaps the start of what could be a really great story.”

Joseph would not confirm which player failed to meet their academic requirements, and which part of their requirements were not matched. However, he did confirm the player will be unable to suit up for the remainder of the 2017 season.

“These things happen,” said Joseph, who self-reported the error to the OUA. “It’s unfortunate when they do, because they impact more than just the student, but it impacts his teammates, the department, and a lot of people.” 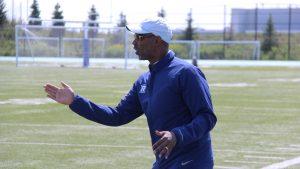 According to a release from Ryerson athletics, all team and player statistics will remain valid, excluding those of the ineligible player.

Despite the forfeiture, Ryerson’s postseason eligibility is not affected; should the team’s record still place them in playoff position with the new losses accounted for, the Rams will still be able to compete in the playoffs this year. If Ryerson wins the rest of the team’s games this season, they’d finish with a record of 10-6-0.

Joseph said the rest of the team is standing by their teammate.

“Being resilient for each other and supporting each other, [after they] had their undefeated season turned around. They’re focused on moving forward, and getting to the playoffs and ultimately the national championship.”