The 2016-17 season was a cluster of ups and downs for the Ryerson Rams women’s basketball team, who wasn’t able to reach their third consecutive U Sports national tournament.

After losing three seniors to graduation, the Rams quickly overcame their lack of experience last season, finishing with a 13-6 record. Their play was good enough to place them second in the Ontario Athletics University (OUA) East division, propelling them to the playoffs for the tenth consecutive year.

Unfortunately, a 68-50 loss against the Windsor Lancers in the OUA semi-final would end their season. But in 2017-18, the Rams are looking to bounce back behind a group of new players and two-time OUA first-team centre Sofia Paska.

“I’m hoping for the best,” Paska said. “I think we can make it to the playoffs, OUA championships and then I think that we can go all the way.”

Paska, who led the Rams in points, rebounds, and field-goal percentage last year, knows that she’ll have to be the leader of this team by leading by example on the court. Having been part of the team that won Ryerson’s first OUA championship in 2016, Paska understands what it takes to get to the big stage.

“I’m a little nervous because I had a great year last season,” she said. “I’m just going to take it game-by-game, so hopefully I keep it up.”

As great as Paska has been, she knows that her unit will have to be much better in order for them to make another deep run in the playoffs for a chance to win the school’s first national championship.

Rookie(s) to look out for

In order for the Rams to fully maximize their success, they’ll have to lean on the play of their freshmen guards. Thankfully, that shouldn’t be much of a problem—with Rams head coach Carly Clarke stating that these players have already made their presence felt.

Losing premier fifth-year guards Kellie Ring and Faatimah A, who both signed professionally this year, had to have been hard for her group. But with these young guards already setting in, Clarke expects to receive a decent contributing as the season trickles down.

“We’re excited for all first-years that we have this year,” Clarke said. “In exhibition so far, Marin (Scotten), Leyki (Sorra), and Jama (Bin-Edward) have had big roles in close important games.

“We’ve graduated a lot in that [guard] position over the last two years, so we’ll be leaning on those three in particular to contribute right away.”

Two members of the trio most recently made their presence felt in the Darcel Wright tournament, with Scotten chipping in with nine points (4-8 FG) and Bin-Edward racking up three steals in a 54-48 bronze medal win over the York Lions.

Each of the three guards were leaders on their high school teams, which would eventually lead them to roster spots on Team Ontario’s U17 team in 2016.

The last time the Rams had this much hype around guards was in 2011, when they recruited Keneca Pingue-Giles – who in 2016 ended up winning the national player of the year award, along with the OUA defensive player of the year.

Even though none of these guards may produce to Pingue-Giles’ level, they’ll certainly have a chance to make an impact as soon as possible. 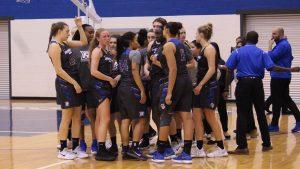 A successful 2017-18 season for the Rams would be to get back to where they were two years ago when they won their first Critelli Cup.

Even though Clarke wants to regain their place on top, she says that her team will have to take things slowly – considering the amount of young talent that she has on her roster this season.

“We never come in with the mentality of championship or bust,” she said. “I told the team during the offseason that our main goal is to take everything slow. We want to make sure that we take one step at a time, because it’s important that we learn as a group.”

In order for the Rams to emerge as one of the best basketball teams in 2017-18, they’ll have to see their three-point shooting improve behind their latest additions.

“The five new recruits that we brought in this year can definitely bring a lot that we were missing last year,” Paska said. “All of them (recruits) are three-point shooters, and that’s an area that we definitely lacked in.”

Last season, the Rams had the third-worst three-point shooting percentage in the OUA, converting on 20.3% per cent of their attempts (69-279) in 19 games.