Elaine “Sunbeam” Lithwick always gets a little nervous before she steps out to perform, no matter how many times she’s done it before.

She dresses herself in bright colours. She wears a yellow shirt, her mother’s hat and she takes out her dollar-store treasures: a crown, flowers, colourful bracelets and necklaces. She isn’t trying to look fashionable. Elvis Presley starts to play and Sunbeam instantly loosens up, beginning to dance and sing.

All that’s left to do is to put on her red nose.

Lithwick is a graduate of the caring clowns course offered at Ryerson through the Chang School of Continuing Education. She was trained to bring cheer to long- term care residents and currently spends three days per month at three different facilities.

Unlike the clowns you may have seen on the big screen, these caring clowns don’t wear a white face or scary makeup. 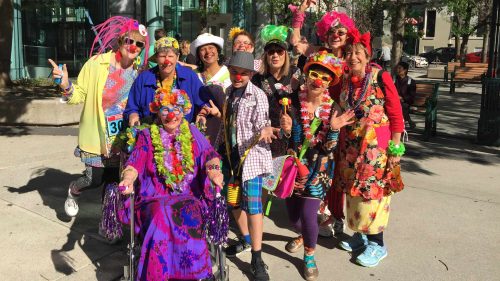 The program is offered to those over 50 years of age, most of whom are retired. The oldest working clown is in her 90s, and she is one of over 50 graduates. The idea began when Lynda Del Grande, the program’s main coordinator and a former clown, brought her experience to Ryerson.

“What we do brings so much happiness to others but it brings happiness to us as well,” said Del Grande, who encourages people to take the course if they’re looking for something that’s challenging and fulfilling.

The course begins each November and is split into three courses ending in April of the next year.

Litwick had always wanted to do something out of the ordinary once she entered retirement. Most of her job as a social worker for 39 years was dealing with serious issues. She began the course at 63 and never envisioned spending most of her retirement as a clown.

“I sing in the shower,” said Litwick. “But as a clown, it doesn’t matter how you sing because clowns can sing however they want—on key [and] off key.”

Lithwick said that the course is carefully designed to help build your self confidence and give you “the guts to put on a silly outfit and a red nose.”

Del Grande, retired at the age of 53 after more than two decades as a teacher. She said that, “you get to a stage in your life [where] all you talk about is aging and dying—that’s the conversation.” 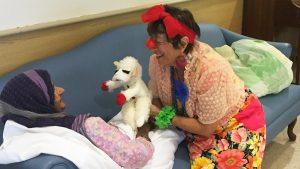 Now at 71 years old, when she finds the time, Del Grande likes to travel and focused on learning Italian last year. *However, almost all of her time is dedicated to the program.

During her teaching career, she had taken improvisation and clowning courses to learn new skills and constantly uses them when teaching her classes.

Unfortunately, it’s not always sunshines and rainbows for the clowns.

“Getting to see [the residents] sometimes it’s sad, because you see them deteriorate and sometimes you see that they’ve passed away,” said Lithwick. “Certainly knowing where you’re going and who to expect to see builds one’s confidence over the years.”

“We learn to play with that. That’s often where the fun is. Not that they’re dark places but often we block that [out].”

She said one of her gestures is to dust feet with a feather duster. She’ll ask the audience and nine times out of 10, they raise their feet.

“Even that motion alone, whether they’ve just been still, they laugh,” she said. “I’m noticing lately I tend to laugh more. If they start to smile, then I’ll laugh, so the clown heightens the experience.”

This is what distinguishes the clowns from just a regular visitor, she said.

“Do we change their lives? No. We change it for that moment in time,” Del Grande said. “We can make them smile.”

As for Lithwick, she doesn’t stop bragging about her clowning to her friends and family. “Sometimes, I even put on my red nose at family functions,” she said.

She encourages students to talk to their parents or grandparents who might be retired and interested in this course—and for once, she isn’t clowning around.

Correction: In a previous version of this article, The Eyeopener stated that Del Grande spends most of her time travelling and learning Italian however, almost all of her time is dedicated to the caring clowns program. The Eyeopener regrets this error.