(All photos by Premila D'Sa)

On the court, head coach Roy Rana and the Ryerson Rams have only one thing left to accomplish: win a national title.

This offseason, Rana took a major step toward that goal when he landed the men’s basketball team’s first international recruit in school history on a trip to Senegal.

“He’s a legitimate NBA prospect,” Rana said. “I hope he enjoys his time at Ryerson, because I know that we will.” 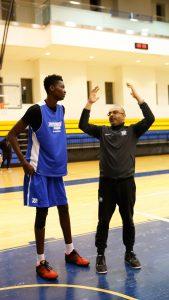 The trip was part of the Sports for Education and Economic Development project—a non-profit organization that uses basketball to motivate young men and women in Senegal while helping them pursue their education. Rana wanted the five players who came with him to realize basketball was about more than what happened on the court. It was an opportunity to broaden the team’s perspective while learning about the stark similarities between vastly different countries.

“On TV, I only got to see one side of Africa,” recalled Adika Peter-McNeilly, the now-graduated Ryerson captain. “So when I got there, I was amazed at how similar it was to how we were living back home and to see how much they loved the game of basketball. It was mind-blowing.”

Senegal isn’t normally thought of as a basketball hotbed, but the West African nation of 15.4 million has produced 10 NBA players in its history. Senegalese players like Mamadou N’Diaye and current Minnesota Timberwolves forward Gorgui Dieng both managed to make the transatlantic leap to the NBA.

Rana didn’t expect to make any major recruiting moves while the team visited. And then he saw Tanor Ngom play.

“It was just fate,” Rana said.

When Rana met Ngom at a basketball camp in Senegal, the Dakar native mentioned he was looking for a North American university to join. A mutual friend introduced them, and that’s when everything clicked between Rana and the seven-foot-two centre.

Ngom’s first encouter with Rana wasn’t his typical experience with a head coach. At that point, he was receiving interest from both Division I and II colleges in the U.S.

“All of the [other] coaches were like, ‘Oh, you can shoot and dribble? Can I get your number?’ But, when I asked Coach Rana if he wanted my number, he said, ‘No. I don’t want your number, I just want to talk to your dad.’”

Rana reaching out to his father was exactly what Ngom wanted; he decided that he didn’t want to deal with the pressure of the recruitment process. But Ngom did his research— eventually finding out more about the coach, and how he brought success to the Rams program.

“It was obvious that Rana really did want the best for me as a person, it wasn’t just basketball.”

After years on the cusp of a national championship, including a silver medal at last year’s tournament, Rana may have finally found his crown jewel, capable of pushing the Rams to their first-ever U Sports title.

The Rams defeated the Carleton Ravens to win their second consecutive OUA title last season, but couldn’t beat them in the U Sports championship to earn the school’s first national title.

“We’ll see how good he’ll become, but I think that he can really help us make that jump,” said Rana. “He has all of the tools to make it happen, and now it’s just about putting it all together.” 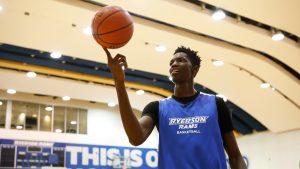 Head coach Roy Rana met Tanor Ngom at a basketball camp in Senegal, and a few months later, Ngom was in Toronto

Ngom first fell in love with basketball at the age of 14. His dad wanted him to commit to his education, not to the game. But Ngom had other plans.

“We didn’t have a lot of facilities in Senegal,” Ngom said. “So, I had to run on the beach and do push-ups to train.”

After a year of seeing his dedication, along with his natural size, Ngom’s dad realized it was time to let his son reach his full potential as a basketball player.

At 15, Ngom went to Europe to hone his craft, playing with two professional developmental programs over the course of three seasons. Overseas, Ngom played one season with Spain’s Unicaja Malaga and two more with the German club, Nürnberg.

Being able to stretch the floor at his size, along with stout defence, should be enough to give Ngom a shot at his dream.

Not since 1983—when former Lakehead player Jim Zoet suited up for the Detroit Pistons—has a player with Canadian university basketball experience reached the NBA. Ryerson took a step toward that feat when on Oct. 21, former Ram Aaron Best was drafted to the G League, the NBA’s developmental organization.

But for now, no Ryerson player has ever made a final NBA roster. Given his potential, Ngom could be the first.

“I expect to get into the NBA one day,” said the first-year arts and contemporary studies student. “I don’t know if I’ll be there for long, but I do expect to get there. For now, I just want to get better.”

Ngom arrived in Toronto on Sept. 27, almost a month after the school year started. He’s still focused on his studies, but in his first game with the Rams on Oct. 7, a preseason matchup with the Saskatchewan Huskies, Ngom showed flashes of excellence and few flaws. 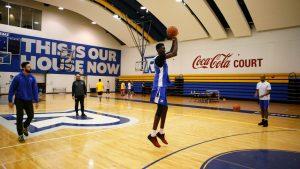 Ngom’s jumper is excellent for a big man, and it should be: he modelled his form after Dirk Nowitzki

He displayed an above-average jump shot that stretched out to the three-point line and looked comfortable playing in the pick-and-roll.

Ngom’s length and natural athletic ability allowed him to finish at the rim through heavy traffic, but it also led to a few questionable fouls. The colossal rookie would finish his debut with eight points, five rebounds and three blocks in 16 minutes of play.

With the Rams coming in with a decent amount of experience at each position, Ngom won’t have to worry about exceeding expectations right away. But even his most accomplished teammates can’t wait to take the court with their new skilled big man at their side.

“I’ve never had the chance to play with a seven-footer before,” Diressa said. “It’s going to be a learning process for all of us, but having that privilege already gives us an advantage.”

Ngom’s learning process includes adjusting to Toronto. He admits that everyone is trying to help him, in a city that gives him a sense of diversity he’s never experienced before. He wants to make his presence felt early on the court for the Rams, but for now, he’s looking to completely settle in Toronto, which includes his first ride on the TTC.