When he started attending Ryerson Polytechnical Institute in 1974, Bill Spurrell was upset to learn the school had no gymnastics club to indulge his high school passion.

After meeting Ryerson’s diving coach, he chose to recast his acrobatic talent for the spring board. But, something felt amiss. “I always liked doing gymnastic routines, rather than just one dive and finishing,” said Spurrell, now 62 and built like an athlete half his age, with veins popping out of his sinewy arms.

On one of his regular gym visits as a freshman, Spurrell and another student, Tom Gallagher, looked in a storage room and spotted a hidden set of trampolines, hardly used. The pair pulled them out and immediately forged a connection. “Great! Somebody else loves trampoline,” Spurrell remembers Gallagher shouting, and the first-ever Ryerson Trampoline Club was born. “For me, it was as close to flying as I could get,” recalled Spurrell, who had used trampolines to train for gymnastic competitions in high school.

In the club’s early days, they had a coach who had experience in the sport; but Spurrell soon took on leadership responsibilities as an unofficial coach, which would ultimately turn into his life’s true calling.

During his first year at Ryerson, Spurrell practiced diving at lunchtime so he could become good enough to join Ontario-wide university competitions. In the evenings, he trained on the trampoline. His engineering degree was grueling, but his drive to improve his routines had proven imperishable. When Ryerson didn’t offer enough gym time, he’d go three times per week to the University of Toronto, where he stored an extra trampoline.

The training paid off. As Ryerson’s only diver, he won the ‘74 Ontario provincial championship. Soon, he matched that success on the trampoline, and the rest of the club followed his lead.

Spurrell was named the 25th best trampolinist in the world, and Ryerson’s club members earned their first national championship in 1978. For Spurrell, starting the club led to a new life, one involving national titles, stints as a member of Canada’s world championship team, and eight years as the coach for the national squad. 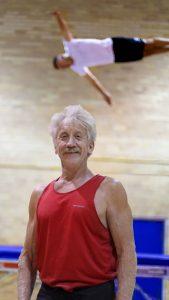 Spurrell had developed a passion for trampolining to the point that he gave up diving. But by the ‘90s, he had a new focus in life: his daughter.

The former champion quit trampolining to direct his attention to parenting. Two years later, the rest of Ryerson’s club quit too. A lack of interest and a dwindling membership rate led to its dissolution.

Spurrell said he knew he had to choose between being there for his daughter and coaching competitively.

But when his daughter turned 18, a silver-haired Spurrell founded a new iteration of the club in 2011 for students looking to partake in gymnastics. To give Ryerson students the chance to train in Kerr Hall once again, Spurrell bought a pair of $20,000 trampolines with money out of his own pocket, giving a fresh start to what is now the school’s only dedicated acrobatic collective.

Forty-three years after joining forces with Gallagher, Spurrell is still at it, teaching students the finer points of indoor flight. Classes this year filled up in the first two weeks, with five people currently on the waiting list. Thanks to participant fees, Spurrell’s investment has been paid back in full. He approaches teaching beginners and more savvy participants with the same calm and composed tone. If a trick or bail is particularly exciting, Spurrell booms, “Yes!”

On his return to Ryerson, Spurrell said he felt like a proud father seeing the weekly improvement of the people he coaches. Hale and with a painter’s brush moustache, Spurrell stays active, taking only Sundays off. He teaches diving and freestyle skiing and is also focusing on circus performance. He is pursuing the flying trapeze—like most men his age. The sport requires deep faith in one’s body while swinging on a suspended bar with gravity-defying grace.

The trampoline club—somewhat expectedly—attracts an eclectic crowd. Among its 17 patrons at one practice are a trained gymnast, a diving coach and a wakeboarder, along with seasoned trampolinists and a tenacious clutch of beginners. The club meets twice a week in Kerr Hall to work on their craft.

At practice, third-year theatre production student Janelle Stewart polishes her cradle—bouncing on her back then turning upright in the air to set her up for another jolt up from the mat. With every jump, she shocks the trampoline bed. In a blink, the springs tighten up, and Stewart soars 10 feet in the air.

Stewart has trained on the trampoline for 10 years but had to stop at one point because of a concussion. “Bill’s been very specific on technique with me, which is going to save me in the long run from hurting myself again.

Carl Meschino, a former gymnast, now focuses on trampoline to keep up with the flipping. “I could do running backflips and stuff, but this is totally different,” he said. “Now I can do double backflips and twists.” As a former engineering student with more extracurricular involvement than most, Spurrell can empathize with students whose hard work can leave them out of sorts. The club is now recreationally focused because Spurrell says students are too busy for the constant travel and drills that competition requires. With time, he believes trampolining can help clear student minds.

“For me, it was as close to flying as I could get”

To Spurrell, trampolining is both a spiritual and physical release. The complex motions and intense rotations strengthen muscles but also sharpen focus, bringing much- needed clarity to the bouncer. “There’s something very unique about this sport,” he said.

The past six years coaching have been a blur for Spurrell, who continues to go into each practice excited to see his students’ progress before his eyes. On the club’s Instagram feed, videos are frequently uploaded showcasing participants twisting and turning in the air. In one video, a man completes a backflip on the Ryerson quad on a summer afternoon. In another, with the trampoline set up beside the Ryerson Theatre, Spurrell stands beside a twisting, flipping student, calling out each move before it happens.

“Here it comes,” he says, anticipating the corkscrew-like jump.

It’s rewarding for Spurrell to share his passion with new people eager to improve, and people of all skill levels can leave with an ace up their sleeve.

“I was 19 years old when I started doing trampoline, “ Spurrell said. “It’s not too late for anyone.”

Click the photos to view the gallery. All photos by Sarah Krichel