The Ryerson Rams and the University of Toronto Varsity Blues played a match for the ages Sunday afternoon at Varsity Stadium, with a place in the Ontario University Athletics (OUA) Final Four on the line.

All season long, the Rams and Blues were locked in a battle for supremacy in the OUA, and at one point, the two teams were tied for first in the OUA East with 16 points apiece. Everything changed when Ryerson forfeited six games due to a player’s academic ineligibility, and U of T suddenly found itself well ahead of the Rams in the standings. In their next meeting, the teams tied, and in their final match of the regular season, the Rams defeated the Blues 4-3 in a game that was as close as the score indicated.

That all set the stage for Sunday’s classic, which ended with Ryerson’s Misel Klisara staring down Toronto’s goalie in a sudden-death penalty shootout with the game tied at zero, and with Ryerson’s entire season resting squarely on his shoulders.

For three seasons in a row, the Varsity Blues eliminated Ryerson from playoff contention. In the 2016 Final Four, U of T squashed the Rams’ national title dreams in a 2-1 thriller, adding fuel to Ryerson’s fire in Sunday’s hard-fought quarterfinal match. After three years of defeat at U of T’s hands, including a loss in penalty kicks in 2014, Ryerson had the chance to send their rivals packing.

“U of T has had our number in the last few years. And we said, ‘You know what? This is not going to happen,'” Ryerson captain Kyle Stewart said. “It was all about revenge today.” 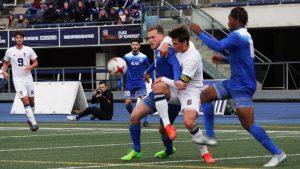 The match between Ryerson and U of T was one for the ages Photo: Brent Smyth

From kickoff, it was obvious the game would be gritty, with both teams refusing to end their seasons just yet. Less than 10 minutes into the match, 10 fouls were already handed out, including a yellow card for Stewart.

Ryerson was knocking on the door within the 30-minute mark, trying to break the deadlocked game, tied at nil.

The blue and gold almost broke through in the 28th minute when Andrew Dias took a crack a couple yards outside the 18-yard box. Despite an excellent effort, Blues keeper Mark Rogal came up with an even better diving save.

U of T countered with several odd-man rushes, but Stewart controlled the Rams game at the back, keeping the Blues in his pocket. Soon, defenders Robert Boskovic and Nathaniel Tambakis were following Stewart’s lead.

In the 34th minute, Ryerson’s Raheem Rose was taken down deep in U of T territory, giving the Rams a free kick, and maybe, a shot at beating Rogal. Klisara stepped up but couldn’t beat the goalie, and the game remained tied at zero headed into the second half.

Eight minutes into the second half, the Blues orchestrated a dangerous rush that was terminated by a Stewart tackle. Off an ensuing corner kick, Ryerson was bailed out by the keeper’s best friend—the post—saving Ryerson from conceding the first goal of the game.

Ryerson managed a few chances of their own off crosses from Rose, but the team couldn’t stick one past Rogal. Ninety minutes weren’t enough to settle the score, and extra time was needed to determine the winner of the downtown Toronto derby. 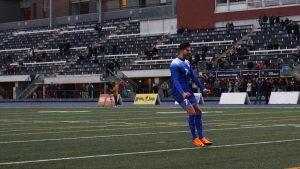 The first 15 minutes of overtime were chaotic, and the Rams were kept in the match by goaltender Praveen Ahilan.

Throughout overtime, Ahilan stood on his head, constantly thwarting any chances U of T could create for themselves. The only shot that beat him in extra time was a deceptive shot from about 30 yards out. Luckily, the crossbar prevented any damage.

After 120 minutes, both teams were still looking to the break the draw, so the game went to a shootout. “When [Ahilan’s] in goal, I’m not afraid of anyone shooting on my net,” Rose said.

U of T opened the scoring when a shot beat Ahilan to the bottom corner. Rose stepped up for Ryerson and knocked home an equalizer to tie the game at one.

Ahilan’s shootout heroics saw him stop three penalties in a row. The Rams took full advantage, as Nick Lambis scored to put Ryerson in the driver’s seat. With a chance for Tambakis to win it, he powered the ball over the net. and Boskovic’s attempt couldn’t beat Rogal.

That’s when Klisara came in.

The fifth-year midfielder looked at Rogal and knew what he had to do. With the game on the line, he placed a perfect shot to the bottom corner, and finally, a winner was crowned in the Battle of Toronto. 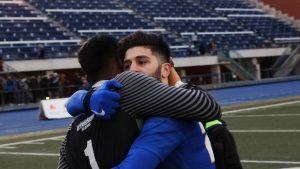 Ryerson now sits two wins away from making the championship match. After dealing with significant adversity this season, it appears they’re hitting their stride at just the right time.

“It’s a gratifying moment,” Ahilan said of the win. “We enjoy the moment tonight, and then we move on to next week.”

Ryerson will play York University next, and Stewart says the Rams are ready for anything after all they’ve been through this year.

“It’s in our blood,” Stewart said. “As our coach said, it was lined up in the stars for this moment to happen, and it happened, and now we just gotta turn our heads to whoever’s in the Final Four.”

Ahilan echoed his captain with confidence.

“We’ve been through the trenches together; offseasons, summers and a heart break to [U of T] the last three years,” he said. “It was a redemption year for us. We wanna go all the way this year. Our goal is nationals.”