The Ryerson Rams defeated the Queen’s Gaels 2-0 Wednesday night in the opening round of the Ontario University Athletics (OUA) playoffs.

The game was settled when Nick Lambis scored a goal in the 80th minute to secure Ryerson’s spot in the quarterfinals, where they’ll be playing their fierce rivals in the University of Toronto Varsity Blues.

“[Lambis] knows our system, knows what we are about, what the coach wants from him, what the team expects from him,” said Rams head coach Filip Prostran. “His job is work rate and putting balls behind the net.”

The Rams started their playoff campaign quickly and with physical urgency. Raheem Rose started the scoring in the 3rd minute, when he delicately curved the ball into the bottom left corner to give the Rams an early lead.

The game slowed down after Rose’s goal and transformed into a disoriented match in which the ball was constantly getting cleared from end to end. Despite that trend, the Rams were in total control in the first half while the Gaels barely threatened Ryerson’s backline.

Queen’s showed a bit more urgency in the second half before the Rams tamed them and Lambis, who led the Rams with nine goals during the regular season, emerged heroically with a classic striker’s finish.

The Rams haven’t lost in an opening playoff match since 2009 and they made sure not to disappoint Wednesday after the rollercoaster of a season they had.

Ryerson’s 2017 campaign was especially difficult, as they were forced to retroactively forfeit their first six games because they fielded an academically ineligible player who has since remained unnamed.

The incident instantly dropped Ryerson from first to eighth place in the OUA East division with a record of 2-6-0.

After that incident, the Rams’ response was a sheer display of class, as the team went on to win nine out of 10 games to secure a spot in the playoffs as the third seed with an impressive 9-6-1 record.

Their ‘never say die attitude’ should worry other teams as the playoffs continue. 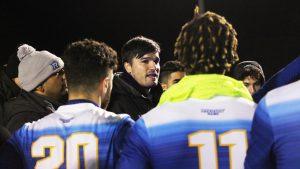 The Gaels’ finished in 6th place in the OUA East division with a record of 6-7-3 to squeak into the 2017 playoffs.

During the regular season, the Rams beat the Gaels in both their match-ups by a combined score of 5-1. In their most recent matchup prior to Wednesday night, Lambis scored a game winner in injury time to push the Rams to a 2-1 victory.

Lambis is now looking toward the Rams’ game against UofT.

“I have a few goals against them as well,” he said. “Hopefully I keep it going. Hopefully Raheem keeps it going; Abdallah [El-Chanti] as well.”

Lambis has scored three goals this season against the Varsity Blues. In their most recent matchup, when they won 4-3, the striker put two shots in the back of the net. Before that, he scored an equalizer in injury time in their first matchup of the season.

Despite their most recent success, Ryerson is well aware that the Varsity Blues ended their season last year in the OUA semi-finals. It was the third straight year the Rams couldn’t make it past the semis.

“We have to take it game by game” said Prostran. “Now we have to concentrate on beating UofT.”

Up Next: In order to reach their first national tournament since 2013, the Rams will first need to beat their crosstown rival UofT at Varsity Stadium on Sunday, Oct. 29, at 3:15 p.m.