The Sears Atrium was unrecognizable Friday night as the ambiance and candlelit runway gave off an atmosphere of class and sophistication.

The theme for the fashion show—put on by second year fashion students—was a combination of self-discovery, pushing limits and redefining fashion. These design challenges were to link the past and future, which would lead them to “Fôrm”.

Fôrm is the shape and structure of an object.

Puiye Chau, fashion design professor, said that the long nights and countless hours spent in the lab were worth it. “This project was about exploring techniques. Test, test, test and it’ll make your work successful.” 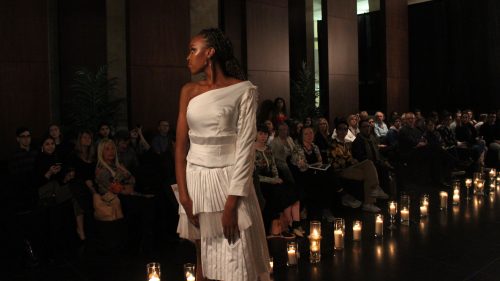 Many designers and crew members collaborated together in order for the whole process to happen. Some pieces were inspired from designs in the renaissance period as seen through the colours and cuts.

Blake Harris, designer and producer of Fôrm, came up with the idea to host a second-year fashion show to showcase the growth and progress in the design students.

“It’s just so nice to be able to witness our work and see the steps to where we get to when we graduate. This theme means so much to me being one of the design students. Seeing the work they go through and doing it myself, I understand the pain, the struggle and hardship of it all.”

Models Avigail Aaron and Princess Manabat say that getting pampered and wearing the dresses were the best part.

“Coming into this, I didn’t know what dress I was going to wear, so it was like [a] fashion runway roulette,” said Princess, a graphic communications student.

“I saw the casting call post on Facebook and thought, ‘Why not?’ This is crazy how this is only second year like yeah I mean this is unbelievable,” added Aaron, who’s in early childhood studies. 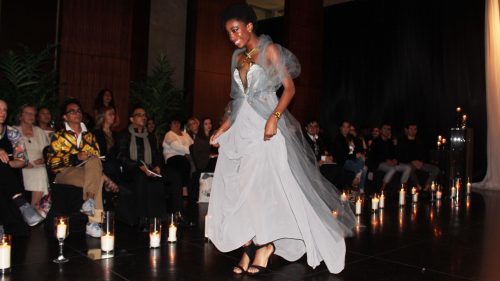 There were many designers who put a lot of work into their handmade designs. Stephanie Boers, who’s in third year fashion design said that when being a designer, “there is no right or wrong.”

“When you spend an entire semester on one dress you get tired of it,” said Boers, who doubted submitting her design to the show.

“Sitting here tonight and seeing my dress on the runway made me so proud of myself. I felt so good.”

Harris along with some other designers aren’t committing to the industry, but hope they still get to be creative and do what they love.

“I’m a storyteller and however I tell stories, that’s where I’m gonna follow it. I’m going to follow my path and my journey. I don’t exactly know where it’s going.”

“I have ideas, but that changes when I wake up in the morning. As long as I can keep telling stories and keep being a creative person then I’m happy.”

Click on the photos to view the gallery. Photos by Parnika Rajaghatta and Mikayla Fasullo