Marauders coach Patrick Tatham made his return to Ryerson

A superb defensive outing in the fourth quarter secured the Ryerson Rams a narrow 72-69 win over the McMaster Marauders on Friday night at the Coca-Cola Court.

The game was up for grabs in the fourth with both teams knotted at 69 with 30 seconds left in the game. Point guard Myles Charvis put the Rams up by two with a layup, and an unexpected steal from Keevon Small with 16 seconds left led to JV Mukama at the free throw line.

Mukama converted on one of the two free throws, putting the Rams up 72-69 with 14 seconds left. The Marauders had one last chance to tie things up and force overtime, but were unable to convert from long distance.

McMaster was led by former Rams’ assistant coach Patrick Tatham, who made his return to Ryerson. But they were unable to get a win as the away team, falling to 1-3 on the season in Ontario University Athletics (OUA) play. Instead, the Rams finished with a win after falling to the Brock Badgers on Wednesday in overtime.

Small was phenomenal on both ends of the floor against McMaster, locking in and collecting five steals, which had Mukama raving about the second-year forward’s performance post-game.

“The coaching staff and the players ourself know what he can do,” Mukama said. “Especially defensively.”

The inability to make free throws late cost McMaster the game. They made all their free throws in the first half but missed six in the fourth quarter, kissing this one goodbye as the Rams improved their record to 3-2.

Ryerson started off their matchup pretty sluggish, falling behind to a early 17-7 deficit, but managed to turn things around quickly thanks to Small, who finished with 14 points.

Small provided the Rams with instant offence, converting on an and-1 and knocking down a three-point shot to keep them within striking distance, down just 25-20 after the first quarter.

The Rams shot an abysmal 22.2 per cent from beyond the arc on 18 attempts in the first half, but didn’t allow that to dictate their flow.

“When shots are not falling we gotta be able to do other things that will allow us to win games,” said Rams assistant coach Borko Popic. 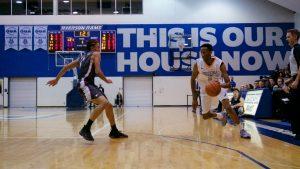 The Marauders strong start was attributed to Miles Seward, who poured in 19 of of his 29 points in the first half, giving them a 34-30 advantage heading into halftime.

Seward leads the OUA in points per game, averaging 26.3 points on 40 per cent shooting from deep in three games.

Mukama had just two points in the first half on 1-5 shooting, but was able to find other ways to be impactful for the Rams.

“I know I can shoot threes, but today I didn’t have a rhythm,” Mukama said. “I need to use my speed against slower guards or bigs to get to the paint to just open up other guys.”

Mukama finished with 14 points and 12 rebounds in 37 minutes of action.

In the end, Ryerson was able to beat Tatham, who served as the team’s interim head coach in the 2015-2016 season after several years as Roy Rana’s assistant. That season, Tatham was named both provincial and national coach of the year, and Ryerson won its first OUA title.

It was all business though for the Rams as they spoiled Tatham’s homecoming.

“Patrick put in a lot of time in this program, had a lot of success and has a lot of strong relationships here. To be honest for us though, it’s just another game,” Popic said. “It was great to see him; also great to get the win.”

Up Next: The Rams, who sit in fourth in the OUA East, will now get ready to hit the road and play the Guelph Gryphons on Nov. 15, starting at 8 p.m.