Ryerson’s Emma Low-A-Chee never intended to play collegiate hockey in Canada. Neither did her teammates at Bill Crothers Secondary School, the athletically focused institution she attended in Unionville, Ont.

Playing hockey for a Canadian university didn’t have the same cachet as going south of the border. So, like the rest of her team, Low-A-Chee headed to the United States, earning a scholarship with the Robert Morris University Colonials, a Division 1 program located near Pittsburgh.

“I never thought about playing in Canada,” Low-A-Chee said. “I was always focused on going to the States.”

Eager to pursue her American dream, Low-A-Chee and her parents began trekking across the border to tour D1 schools when she was in Grade 9. At the end of Grade 12, Low-A-Chee made the considerably shorter trip to Ryerson to tour the Mattamy Athletic Centre.

By the time she visited Ryerson, she had already accepted her offer from Robert Morris. Even if she liked what the Rams had to offer, it was too late.

“I already committed,” she said. “I couldn’t go back on my word.”

Her scholarship meant she was finally living her dream. But after arriving in Pittsburgh in 2016, things didn’t go as expected.

Low-A-Chee barely played. She woke up before 6 a.m. for practice each morning and arrived early to put in extra work before everyone else started skating. She missed her family, and for them to attend her games, they’d have to drive five hours just to watch her ride the bench.

Before her year at Robert Morris, Low-A-Chee never considered quitting hockey; the game was her entire life. But that year, she began questioning why it was so important for her to play in the U.S. in the first place.

Low-A-Chee started playing when she was three, spending much of her youth on boy’s teams. She was captain of her high school team, also playing in the Provincial Women’s Hockey League, the highest level for girls in her age group.

But at Robert Morris, a sport that had always been both work and reward, became just plain work.

“It was getting to the point where I wasn’t happy anymore,” Low-A-Chee said. “ I was going to school for free, but I also didn’t want to be miserable for the next three years of my life.”

Low-A-Chee felt bound to the school because of her scholarship. Throughout the year, she kept in touch with Rams head coach Lisa Haley, who told her that if she changed her mind about Robert Morris, Ryerson “would still have interest.” 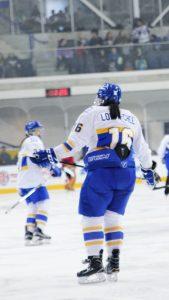 When a Colonials teammate announced she was transferring, it was like a weight was lifted from Low-A-Chee’s shoulders.

“That’s when I realized that it’s OK if I left,” she said.

And so, Low-A-Chee decided to come home; the NCAA wasn’t all it was cracked up to be.

According to Scholarship Stats, a website that compiles data about American college teams, more than 37 per cent of the players on women’s rosters in 2016 hailed from Canada, with 176 players from Ontario alone.

Part of the American hype, Haley suggested, is that the prospect of a full-ride scholarship to a U.S. school “is perceived as quite prestigious.”

Low-A-Chee thinks Canadian women’s hockey is becoming more attractive, and that there isn’t a great need for students to go to the U.S. for their competitive hockey fix.

Haley said a few OUA players have left American teams to play in Canada instead. Over the years, several Rams—including team captain Ailish Forfar, who played for Dartmouth College—have made the switch.

Even though she has to repeat her first year of university, Low-A-Chee isn’t annoyed—she is finally playing meaningful hockey again. She gets to join the rest of Ryerson’s women’s hockey team on its hunt for the program’s first playoff spot since the 2014-15 season. Campus is only a half-hour from home, so her family gets to watch almost every game.

“We don’t have anyone who is not good,” Low-A-Chee said of her new teammates. “To have four strong lines is just amazing.”

Their skill isn’t the only thing about her teammates that Low-A-Chee appreciates. Their comradery compares only to her high school team, a team she calls “like a family.”

“Everyone’s really close here… especially compared to last year, everyone is so supportive of each other,” she said.

Now, Low-A-Chee thinks of hockey differently than she did when she committed to Robert Morris, and she hopes high school athletes learn the lesson earlier than she did: Putting her own happiness before what’s expected of her has turned her career around.

“You can’t play for anyone besides yourself,” she said.