Becoming award-winning and Emmy-nominated producers wasn’t part of their childhood dream. Matt King and Andrew Ferguson both went into different paths after graduating high school—King took human resources at University of Western Ontario, and Ferguson went to University of Guelph for theatre.

But there was one thing that sparked an interest in both of them–television and film production.

“Andy, my brother, was working at Much Music and he was doing these commercials, and they were fun and creative. I was in the background. I got to act in it but then I was also running around grabbing coffees,” he said. “And then at the end of the day, I’d get a couple hundred bucks. I got paid a couple hundred bucks for a day’s work, and that didn’t feel like work.”

King’s brother then told him that this could be his career too.

“My brother was all like, ‘Well, you know you don’t have to get that investment banker job.’”

That was when King realized he knew exactly what he wanted to do.

Ferguson, on the other hand, began exploring the realm of film by working on independent horror films with the people he met at school. But it wasn’t until after he graduated from university and he was still working in the food industry, that he realized he wanted to take film production seriously. Ferguson was working for the Food Dudes, a catering company in Toronto.

“I remember very clearly feeling like I needed to make a decision about which industry I was going to pursue,” Ferguson said. “But I don’t recall it being that difficult, to be honest, because I really enjoyed the film industry.” He then resigned from the Food Dudes and went whole-hog on film and television.

In 2008, both King and Ferguson enrolled into Ryerson’s Chang School to learn more about film production and began working on more content together. In 2011, their production company, called LaRue, was officially in full force.

LaRue has produced content for well-respected media companies and broadcasters such as Much, Comedy Central, NBC Universal, and Sportsnet. They are the masterminds behind the web series Filth City–which is based on the late former Toronto Mayor Rob Ford’s crack cocaine video. 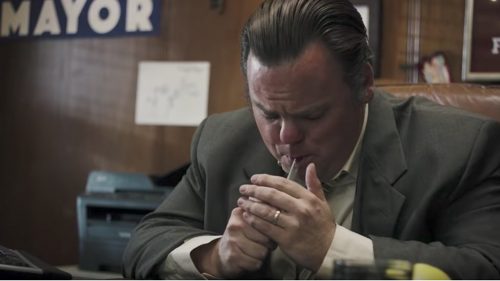 The show is a low budget comedy satire that premiered on YouTube on Nov. 5 with the film split into episodes released over the week. It includes a well-written script and engaging characters who live in the town of York, a city doomed with crime and corruption. Pat Thornton, known for his comedy series Sunnyside, plays the Mayor Tom Hogg who is caught on video smoking crack.

King and Ferguson are also the producers of The Amazing Gayl Pile, a web series following a man’s quest to take over the world of home shopping television. This series is one of King and Ferguson’s proudest works, as it has won two Canadian Screen Awards and just recently, an International Emmy nomination.

“The Emmy nomination is the biggest honour to date,” Ferguson said. “It’s such an honour for the show. Especially since we feel like there’s so much work to be done to get the show out there. It’s really great for the show to be validated like that.”

With the amount of risks they took in the beginning of The Amazing Gayl Pile by doing the demos, putting in the long hours, and sleeping on the floor in the office, King said that it’s all justified. “I broke down and cried for like an hour,” said King when he first found out about the Emmy nomination for the show.

Despite all the successes, both King and Ferguson know there’s still a lot of work to be done ahead of them, especially finding ways to get their content to reach a wider audience now that technology is vastly changing.

“The playing field’s changed and you can’t rely on your broadcaster anymore to put your show out. Now you have to build your own damn audience,” King said. “That’s the reality of how things are working these days.”

“It’s a constant thing to try and keep up,” Ferguson said. “We’re staring to feel old.” 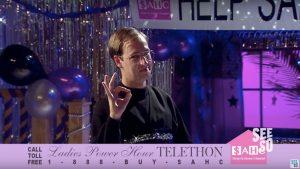 Screenshot from the film The Amazing Gayl Pile

It’s no surprise that technology has created a huge impact on the television and film industry. Gone are the days of video rental stores and relying only on movie theatres to watch the latest films. People can watch anything they like with a click of a button, and this is something that King and Ferguson see as a challenge but also an opportunity for LaRue.

“It comes back to education and trying to stay up to date,” Ferguson said. “You just have to be keeping your mind open to new and evolving ways of doing things, which extends from everything to cameras and lighting to editing to writing.”

Regardless of the constant changes in the industry, King and Ferguson have one main goal–to create stories, despite all the hurdles that they’ll come across with technology.

“At the end of the day we just want to be story tellers and be able to tell stories,” Ferguson said. “However we have to do it, we’ll aim to deliver.”