The Feed Students, Support Survivors campaign included the GFC and the Sexual Assault Survivor Support Line (SASSL), two of Ryerson Student’s Union (RSU) equity services. The vote supported a $5 contribution per student in the fall and winter semesters to be split equally between the services. With the success of the vote, the food bank will annually receive about $186,265 from the levy.

Rajean Hoilett, one of the three coordinators at the GFC, said there is constantly a shortage in their groceries to offer to students who rely on the centre.

“The reality of not having enough resources to adequately provide services has been a reality the GFC and its predecessor have experienced for as long as the services existed,” said Hoilett.

He said he first learned about the food bank as someone who used the service.

“Being able to have this service, I know for myself personally, made the difference [of] whether I could come to class, so I see the immediate sort of support they’re offering through services like the GFC.”

According to the latest Hunger Report released by the GFC, while they receive substantial donations from the university, they do not have guaranteed annual funding. The GFC also receives a food donation every Tuesday morning from the Daily Bread Food Bank, but struggles to have enough for the rest of the week.

Hoilett, along with another GFC coordinator Kim Vaz, said the centre is used more frequently than most students think and it is a necessity to ensure food insecurity is limited.

As a centre that sees just under one hundred students per week, the delivery runs out quickly. “Often people will come in, look around, and walk out because we don’t have fresh food,” said Vaz. 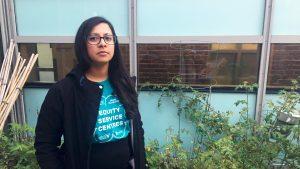 “Those items are a little harder to come by and they’re more expensive so when we can’t provide that meaningful support for students, it’s actually really tricky and challenging,” she explained.

Hoilett said the centre found some support for their shortages through sponsorship, community groups and food drives, but no matter how successful they were, they were inconsistent. He added that with the outcome of the referendum, the GFC will have a steadier way of supporting its sustainability.

This past summer, the GFC did a survey to see how much money students would feel comfortable paying in order to support the food bank and SASSL. The survey revealed most students would be willing to have a five to 10 dollar increase in their tuition going towards supporting these services.

Catherine Abes, a second-year journalism student said she doesn’t think the $5 increase proposed by the referendum is unreasonable.

“I’ve spent more on coffee and I’m more than willing to give up one coffee a year to ensure there are adequate programs helping students at risk,” said Abes.

According to the results emailed to Ryerson students on Thursday, out of 4,440 votes, 3,338 students voted for the referendum, 1,058 were against and 44 declined to vote.

Vaz and Hoilett said the referendum will do more than just stock the shelves of the food bank more regularly. Part of the tuition increase will provide an emergency relief fund for students who need money to buy groceries. The levy is also intended to increase operating hours for the centre and help maintain a focus on locally-sourced foods, dietary restrictions and healthy food options.

“As coordinators and students who really care about the space, we’re going to do whatever it takes to make sure we have the resources to operate,” said Hoilett.