The Rams women’s volleyball team continued their undefeated season Sunday afternoon, concluding a season sweep against the Trent Excalibur with a straight-set victory, 25-7, 25-15 and 25-13.

Ryerson’s record is now a perfect 5-0 so far this Ontario University Athletics (OUA) season, and head coach Dustin Reid is pleased to say the least.

“We made five attacking errors in three sets. We’re not gonna lose on that,” said Reid. “When you get off to a good start you’re always worried that you’re getting close to the hot frying pan, you don’t want to touch it.”

Yet the Rams stayed hot and decimated the still-winless Excalibur at Coca-Cola Court.

Ryerson’s Lauren Veltman displayed her elite skill-set, notching a career-high 18 kills along with four digs and two blocks, while Ryerson’s OUA all-star Theanna Vernon chipped in with 11 kills of her own en route to the lopsided win.

This marks the first time in program history when the team started the season 5-0. Which leads to the question of whether the Rams could compete for their first OUA championship this season. As one of two teams to remain undefeated thus far—the other being the University of Toronto Varsity Blues—there’s reason to believe.

“We have a really good team dynamic this year. Everyone meshes well together and everyone knows their role and what they need to do on the court or [off],” said outside hitter Cailin Wark. “We’re going to keep taking it one game at a time and set goals for each game ahead.” 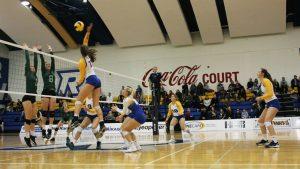 Against Trent, an energetic Rams lineup showed no sympathy, defending hard while cashing in on kills on the other end.

A first set onslaught (25-7) was led by Wark, who opened the game with four aces in a row. Trent called three early timeouts to keep the game in reach, but it was no help, as the Excalibur continued to come up short.

The Excalibur started the second set with a short-lived lead that would quickly vanish due to Veltman. Her cross-court kills were not to be matched, consistently proving herself as an emerging star in the OUA. 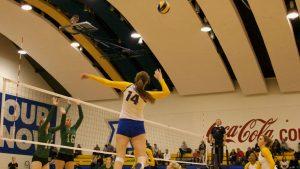 A glimpse of hope arose when Trent took a commanding lead to start the third set. Despite Ryerson struggling to convert on the offensive end, they held tight, clawing back to a 10-7 lead. It was the closest the Excalibur would come, and they dropped the final set 25-13.

“Were really sticking together as a team. Everyone’s clicking so well and it happens to be working,” said Veltman.

Up Next: Ryerson will look to continue their momentum heading into their clash on Friday against their crosstown rivals, the Varsity Blues. Both teams remained undefeated, adding fuel to the existing competitive fire. The game begins at 6 p.m. at U of T’s Goldring Centre, and the atmosphere is sure to be electric.