The team poses with a Ryerson school banner after defeating Laurier

The Ryerson women’s cricket team played its first-ever game on Nov. 24, and the Rams were quick to score runs, take wickets, and beat the Wilfrid Laurier team to win its first-ever series, despite getting caught in traffic en route to Waterloo.

The busload of Ryerson cricket players—men and women—along with their fans, fought over the auxiliary cord and jammed out as they drove to the Laurier Athletic Complex. The ride took longer than expected though, and the women started their warm-ups as soon as they got to the gym. Though spirits were still high, the noise died down in anticipation of playing against another school for the first time.

The women played against the Golden Hawks in a three-game series organized by Canadian College Cricket, with both teams competing for the first time since being established earlier this year. The Ryerson team, led by third-year journalism student Hirra Farooqi, has been practicing every week to make sure all the members—including many who’d never played before— were ready for their début.

As they began the game, it was evident to Farooqi that their efforts paid off. 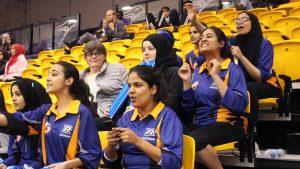 The players sit in the stands cheering while a teammate is up to bat Photo: Nina Shu

“Every single person on the field was always on the move,” said Farooqi. “As captain, I have to look around to make sure that the fielding is good, and I didn’t have to do it that much because everyone already had that going.”

Though nervous for their first game, the women won with 67 runs and two wickets in comparison to Laurier’s 66 runs and five wickets. With the confidence that came from their victory and the deafening encouragement from the Rams fans ringing throughout the gym, the women won the second game in less than half an hour, scoring 24 runs and two wickets to Laurier’s 23 and four. With two wins, the Rams clinched the series victory.

With a team at bat and a team on the field, cricket is somewhat similar to baseball—just substitute the bases for two sets of upright wickets, flatten the bat and pitch with a straight arm. Depending on how far the batter hits the ball and whether it bounces, they’ll score either four or six runs.

Unlike baseball, one team wins as soon as they score more runs than the other team or when they get all of their opponents out. In both games, Ryerson fielded first, which meant by the time they were up to bat, they knew exactly how many runs they needed to win.

The team’s triumphant start had them looking forward to many more games, perhaps with the women’s team from the University of Waterloo. But first, they needed to get back to Toronto.

“The bus ride back is gonna be so lit,” said Ryerson cricketer Absar Zaidi, smiling as she embraced her teammates.