The Ryerson community has lost an institution.

Before I started at Ryerson, my mom told me I needed to try this little hole-in-the-wall deli near campus—all the judges from the nearby courthouse go there for lunch, she said. I figured what was good for old lawyers was good enough for me, so I walked in, sat in an aged booth with cushions that were falling off the seats, and had a coffee. And another. And a corned beef sandwich. Then I was hooked for the next four years.

When I was a scared first-year student, I didn’t know where to go or what to do. But right off the bat, I had the Mutual Street Deli. But after 60 years of business, they’ve closed their doors for good.

It took a long time for the old diner to feel familiar, but every time I came in, the waitresses would get a little friendlier and would yell at me a little less for picking up some take-out five minutes late. I didn’t get a chance to go at all one summer, and when I finally returned, Anastasia, our favourite waitress, shouted: “Where have you been?” 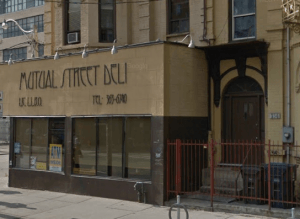 The Mutual Street Deli is closing after 60 years of business

It’s hard for Rye students to find a place that feels like their own, especially with such a cramped campus that lacks personality. But Mutual Street is where I established who my friends are. We would meet there every Tuesday after (or sometimes instead of) class and figure out what made each other tick over their famous Twisted Chicken Joe or Breakfast Pita. It was even OK if someone occasionally ordered fish.

Living in a big city isn’t easy. Everything feels so stuffy and impersonal, which makes the idea of being a “local” so enticing. Having a support structure of people that know and care about you, even if it’s just concentrated in one little spot, is integral in feeling like you belong. When I first moved to Toronto, the Mutual Street Deli helped me feel grounded in the city and prevented me from just running back to my room as soon as classes ended.

If you’re just starting at Ryerson this semester or still haven’t found your footing, go exploring around town and find yourself a place, somewhere you can see yourself going for years to come. Then, go take your friends and family. And eventually, you’ll find yourself in the middle of an ecosystem that’s vanishing too quickly in Toronto. Those judges are probably going to Chipotle now.