Ever since Kari Maaren was a child, she always wanted to become a writer—one who would live in a big house with lots of dogs and make lots of money.

That didn’t exactly happen. But Maaren still found success in becoming an English professor at Ryerson.

If you’ve ever taken Maaren’s “Fairy Tales and Fantasies” class, you’ll find it hard to deny that she’s incredibly passionate about the subject. A Kari Maaren lecture about Harry Potter is loud and intense – she’ll challenge you on your love for Severus Snape and find a way to make you interested in the specifics of Gothic horror. It isn’t hard to guess that this is someone who really loves what they’re doing.

But Maaren always knew throughout her life she wanted to study English.  Her passion for fairy tales and fantasy has been with her since childhood.

“My parents got me some works of fantasy, I just ate them up,” she said. During her time at the University of British Columbia, Maaren took a course on fairy tales and immediately fell in love with it. After that, she grabbed all the fairy tale books from the library and read as many as she could.

But Maaren’s love for fantasy also made her a target during her high school years. She struggled for quite a bit, only finding “geeky” friends like herself in grade 11.

“High school years were hell, because high school was a terrible terrible place full of terrible people who want to torture certain people who don’t exactly fit in.”

But the experiences brought Maaren closer to one of her biggest goals – in the fall of 2017, she finally published her first novel, “Weave a Circle Round,” and fulfilled her dream of becoming a published author.

It took around seven years for Maaren to publish the novel. She had written multiple novels throughout her career but chose to keep them hidden on her shelves. Her new novel revolves around a young teenage girl who has trouble fitting in high school, and doesn’t have a well-settled family life either. Strange things start happening after the new neighbours move in.

Students who decided to lightly stalk Maaren online before taking her class will easily find her original ukulele compositions on YouTube.  It’s Maaren’s hidden and niche talent – writing songs based on famous fantasy works, like this one about the perfect, beautiful Elves from the Lord of The Rings that everyone loves to hate. 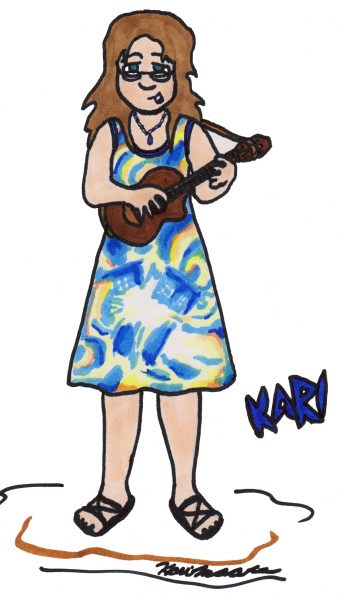 A self portrait by Professor Kari Maaren who also publishes her own web comic.

Maaren will be performing at her own book launch. She usually performs at reading series every month and occasionally at some conventions.

She started playing the piano and ukulele when she was a child but couldn’t continue it on a professional level because of her disability. Maaren has a mild case of cerebral palsy which causes her hand to shake. Growing up she wasn’t strong enough to start a lawn mower, took half a year to learn how to juggle and she only learned how to use the jump rope when she turned 41.

“When I was a kid, people kind of assumed that if I couldn’t do something once, I would never be able to do it,” said Maaren.

Maaren says she used to let people’s low expectations determine her aspirations, but now she has a different approach to those comments.

“I get a little bit more determined. I’m like I will do this if I die in the attempt,” Maaren said. “Disability is part of what you do and who you are.”

Maaren says she is especially proud of herself for not dropping out of graduate school even when she was discouraged by it. Now, along with teaching at Ryerson, she also publishes her own online comics.