Hundreds, clad in pink hats and red scarves, holding signs with sayings like “When HER story becomes history,” gathered in Nathan Phillips Square on Saturday to march for women’s rights.

The second annual Women March On Toronto, titled “Defining Our Future” encouraged speakers and marchers to imagine a future where equality is a reality.

Last year, following Donald Trump’s inauguration, women took to the streets of Washington, D.C. to protest his presidency and proposed plans affecting women and other marginalized communities. Cities all over the world followed suit.

One by one, activists took the stage and described their hopes for the future.

“Our future is in tact if, as women, we engage in solidarity, amplifying the voices of those most marginalized”

Zanana Akande, a former Ontario politician, said she envisions a future where we live in “a country that values the contributions of women.”

Janelle Hinds, another speaker, said she sees a time when women’s work isn’t dismissed as “easy” or “cute” simply because it is done by a woman.

Speakers unanimously saw a future in which no one ever has to say “me too” again.

Although the strive for gender equality was at the heart of the rally, everything from affordable housing, a diverse city council, amplifying the voices of people of colour and the need for Indigenous visibility were emphasized. 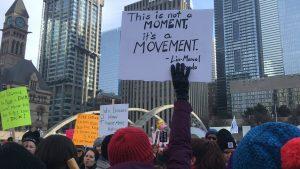 Celeste Bronfman, a graduate of Ryerson’s RTA program and attendee of the march, said she attended to support fellow women in demand for equality. She also said Ryerson helped her develop into the feminist she is today.

“I learned many terms at Ryerson to define what feminism means to me,” she said. “I took female rights courses, which were amazing.”

When asked what Ryerson can do to help further the cause, Bronfman highlighted the importance of “building stronger communities for women to bring men into the conversation, make them allies and just have meaningful conversations.”

Emily Verduyn, a business student at Ryerson, said she attended the march because it’s easy to lose sight of why feminism is essential, but attending rallies and hearing the different voices of people in the community is a reminder of why it’s so important.

“I want women to be seen as powerful, strong human beings,” she said. “I pretty much just want women to feel so strong and confident in themselves. That is the future that I see happening.”

All photos by Sam Moya

Kassandra Neranjan, a University of Toronto student, was one of the final speakers to take the stage before the marching began.

Following the speakers, Indigenous drummers filled the square with music as the hundreds began to march.