Effortlessly intertwining the story arcs of classic fairy tales, the Ryerson Musical Theatre Company (RMTC)’s performance of Into The Woods is simply captivating.

RMTC’s new show takes a step in a different direction from the company’s previous work with a dark, compelling, authentic presentation of the 1987 Broadway original.

Into The Woods, directed by second-year creative industries student Jarrett Stoll, is the company’s first show away from the jolly musical framework the company had previously adopted in the past. “This was a huge 180 in terms of showing the other side of musical theatre,” said the show’s artistic producer, Brandon Schwartz.

The musical begins with a baker and his wife who venture on a quest to remove a curse preventing the wife from having a child cast by a witch. In order for the witch to remove the curse, they must get her four strange items: A cow, a cape, locks of hair and a slipper.

This strange checklist puts them on a path that crosses over with the story arcs of Cinderella, Jack And The Beanstalk, Little Red Riding Hood and Rapunzel.

“The main storyline of the baker and his wife, they are the catalyst for the other stories,” said Parker Ducharme, who worked backstage on the show. “They’re the ones that tie it all together.” 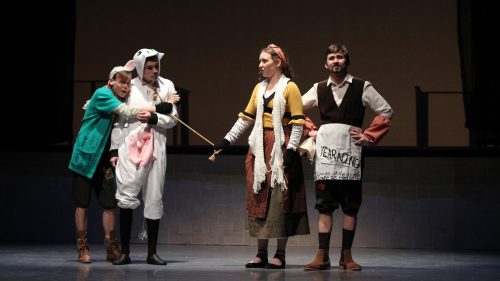 There’s a concern with crossovers—often they can come off as overwhelming and disengaging, but the RMTC’s performance is anything but. Thanks to a balanced number of scenes involving a nice blend of energetic ensembles and fascinating musical numbers, while adding scenes with dramatic dialogue, the piece flows cohesively as a unit.

To add the excellent team work, were standout performances by the witch, played by Olivia DeRoche, with her sincere rendition of “Stay With Me”(notably performed on screen by Meryl Streep in the 2014 movie Into The Woods), and Rapunzel’s prince, played by Boman Martinez-Reid who charms the audience with his charisma and unique ability to maintain his comedic timing while keeping the serious undertone of the piece.

With 115 people from different professional background working for the company, the play’s creation was a long, tough grind that paid off.

“It’s the culmination of a year’s work of 115 people working together as a community to bring this to life” said  Schwartz.

“What we’re trying to do with this is have it be a learning opportunity for everyone involved” said Into The Woods production manager,  third-year psychology student Zhanina Bregu.

“It’s a symbiotic relationship for everybody that’s involved, to make it happen we couldn’t have do it without all these people, without all these different perspectives. We’ve created an ecosystem out of the Ryerson community” said Bregu who has worked for the RMTC for all three years of its existence.

“Some of us are aspiring to do this professionally, some of us are just picking up other skills along the way.”

Into The Woods will run in five performances between February 14 and 17, 2018 at the Betty Oliphant Theatre.