New progress has been made on the development of Toronto’s Indigenous Business District since The Eye reported on the district’s confirmed location last November. The centre at 200 Dundas Street East will be named the Indigenous Centre for Innovation and Entrepreneurship (ICIE).

The development of the district is scheduled to be finished by fall 2020, assuming that construction of the ICIE building is completed in the fall of 2019, according to Ward 27 city councillor Kristyn Wong-Tam.

The centre will facilitate business incubators and entrepreneurial mentorship for Indigenous and non-Indigenous members, said Wong-Tam. She said the point of the Indigenous business district and ICIE is to make “resources and business supports available to Indigenous entrepreneurs.”

“If you want to be an entrepreneur and you are an Indigenous person, then we welcome you into this space and we want to work with you to help scale up your business,” she said. A study from York University and St. Michael’s Hospital estimate Toronto’s Indigenous population to be between 45,000 and 73,000 people.

Wong-Tam said that while Ryerson’s formal relationship to the Indigenous Business District isn’t defined yet, she thinks the university is looking forward to becoming an advisor in the district’s activities or sharing space within the ICIE. OCAD University and the University of Toronto have also shown interest in associating with the district and its development. 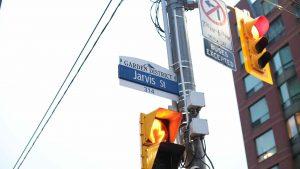 The new district will be near Jarvis and Dundas streets. Photo: Devin Jones

Jane Kidner, the executive director of external relations for the Ted Rogers School of Management, said that the business school has offered their support to the development of the district “in any way that may be helpful to the Indigenous community.”

According to Wong-Tam and Kidner, both are already working with the Mississauga New Credit First Nations in the development of the district and “outreach initiatives” respectively.

The completion of the district’s centre is dependent on many other factors. “We have to finalize our business plan, we have to constitute a board of directors, we have to most likely hire a project manager, we’ll probably have to hire two or three staff persons to run the space, and then to go and recruit potential tenants, entrepreneurs, and start-ups,” said Wong-Tam. “So, there’s a lot of work between now and the time that doors will open.”

The two next steps for the district’s development include producing programs and designing the style of the ICIE building. This will involve hiring a project manager with a “really good working relationship with the Indigenous community,” said Wong-Tam.

Wong-Tam said that so far the development of the district has been supported heavily by volunteer community members and corporate groups interested in the district. “We’ve had people offer to give us their architectural skills for free. IBI group is giving us $250,000 worth of architectural design work, which is going to go a long way in fixing the space,” said Wong-Tam.

“We first began talking about the district back in 2012, there were just words. But now there are doorways and there are windows being built,” she said. “The next 12 to 16 months will be absolutely critical for us in laying down the vision.”