Ryerson found the bed bugs in Victoria building and is treating them with steam.

Today at 4:57 p.m. Ryerson sent an email to all students acknowledging that there were bed bugs found in room 205 of the Victoria building.

The university has relocated all classrooms in rooms 205 and 203 of the Victoria building to conference rooms in the Bond Place Hotel and The Holiday Inn, respectively.

“Only once the rooms are deemed to be clear will students and faculty be allowed back in,” the email sent by the Facilities, Management and Development department said.

The first inspection of room 205 happened in December 2017 after unidentified bugs were reported seen in the room. The second investigation was said to have taken place on Mar. 9 of this year, following a separate sighting of bugs in the room. 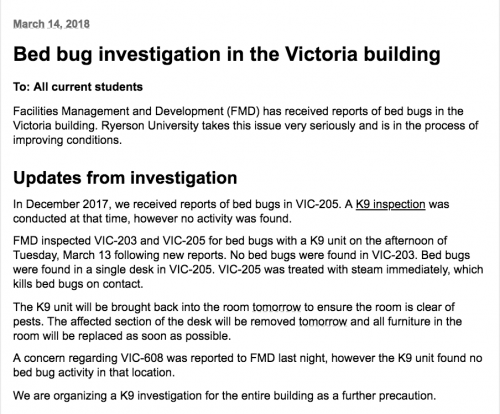 The university said they investigated the room again on Tuesday after an article revealing bed bugs in the room was published in The Eyeopener and picked up by several media outlets in the city.

The university said room 205 was “treated with steam immediately,” after the third investigation, which included bringing in a canine unit trained to sniff out pests. The email said the canine unit will be brought in again today to look for any activity.

Mike Cardaci, owner of Just Bed Bugs, a Toronto exterminating company, said steaming or heat-treating the room is one of two options typically recommended for eliminating bed bugs. He said steaming is the less time consuming option of the two, and people can return to the room safely shortly after the procedure.