Hundreds of Indigenous people, allies and supporters held hands and shuffled to the beat of drums and singing in a traditional circle dance at Nathan Phillips Square on Saturday to commemorate the life of Tina Fontaine.

The unity rally, Toronto: Justice for Tina Fontaine, was held just over a week after a jury found Raymond Cormier, the 56-year-old man accused of the second-degree murder of the young Indigenous girl, not guilty. Attendees in the crowd smudged and held up signs reading, “Justice for Tina” and “Shame on Canada.”

“I’ve learned not to expect much of the Canadian justice system,” Arscott told the crowd on Saturday afternoon. “I never have. But because this case struck so close to home, I was hoping for a miracle I wouldn’t receive.” 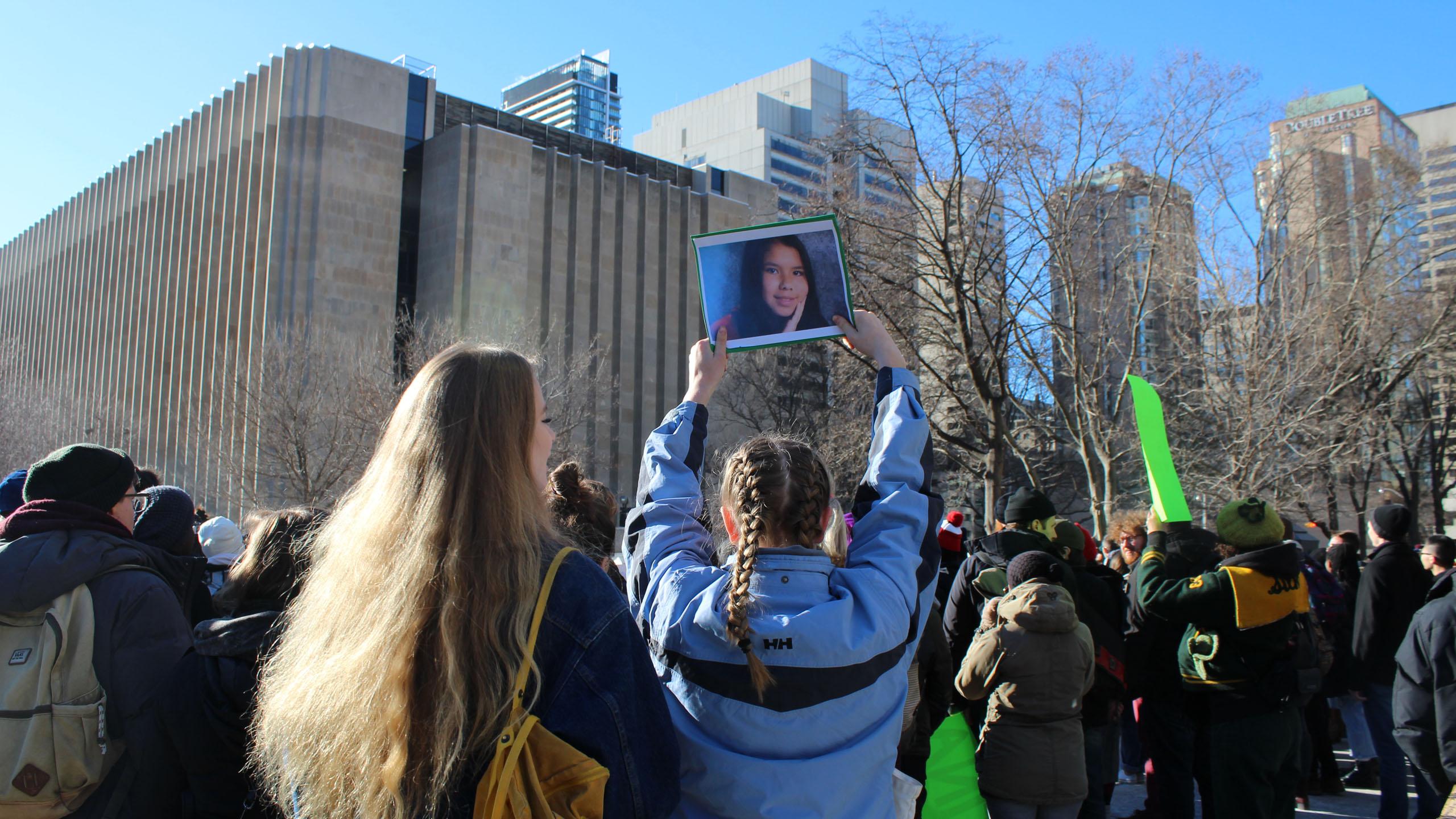 An attendee holds up a picture of Tina Fontaine, a 15-year-old girl from Sagkeeng First Nation in Manitoba who was murdered in 2014, at a unity rally outside Toronto City Hall ​​on March 3. Photo: Maggie Macintosh

Fontaine, a member of Sagkeeng First Nation in Manitoba, died at 15. Her death played a role in convincing the government to set up the federal inquiry into Missing and Murdered Indigenous Women and Girls.

Her body was found wrapped in a duvet and weighed down with rocks in Winnipeg’s Red River in 2014, one week after she was reported missing. Cormier was charged with second-degree murder more than a year later. His trial, which started Jan. 29, 2018 lasted for nearly three weeks. Since Cormier’s acquittal, there have been protests across Canada in cities including Regina and Vancouver.

“I came to the event today in support of Tina Fontaine, her family and Indigenous peoples, especially youths, across Turtle Island,” said Sari Park, a second-year language and intercultural relations student at Ryerson.

Park said it’s important to show up to these events because, while many settlers argue they personally “had no hand in colonization, it is actually something we reproduce every day.”

“We are complicit, and when Canadian institutions create unlivable conditions for Indigenous folks, that is on us,” she said.

The night of the verdict, Arscott said her social media timelines were flooded with apologetic posts and users writing, “the system is broken.”

“My friends, this system is not broken, it is working exactly how it was designed to,” she said, adding she wasn’t surprised by the verdict.

Activists say there are more than 4,000 cases of missing and murdered Indigenous women in Canada.

Saturday’s rally happened just weeks after Torontonians gathered in Nathan Phillips Square to protest the not-guilty verdict of Gerald Stanley, a Saskatchewan man who was charged with the second-degree murder of Colten Boushie, a member of Red Pheasant First Nation. An all-white jury ruled Stanley was not guilty of killing Boushie last month.

A handful of mostly Indigenous speakers shared poems, stories and called for action on Saturday. Many cited failures of the child care system for Fontaine’s death.

Allyson Pratt, a member of the Cree Nation in Alberta, was in the crowd for several hours on Saturday, listening and smudging.

“It’s devastating that the system could fail a young person to this extent. The fact that there’s no justice for her family, for her immediate loved ones, it’s absolutely crushing,” she said. “It’s time to send a message to the government that our lives are important and we won’t stand for injustice any longer.” 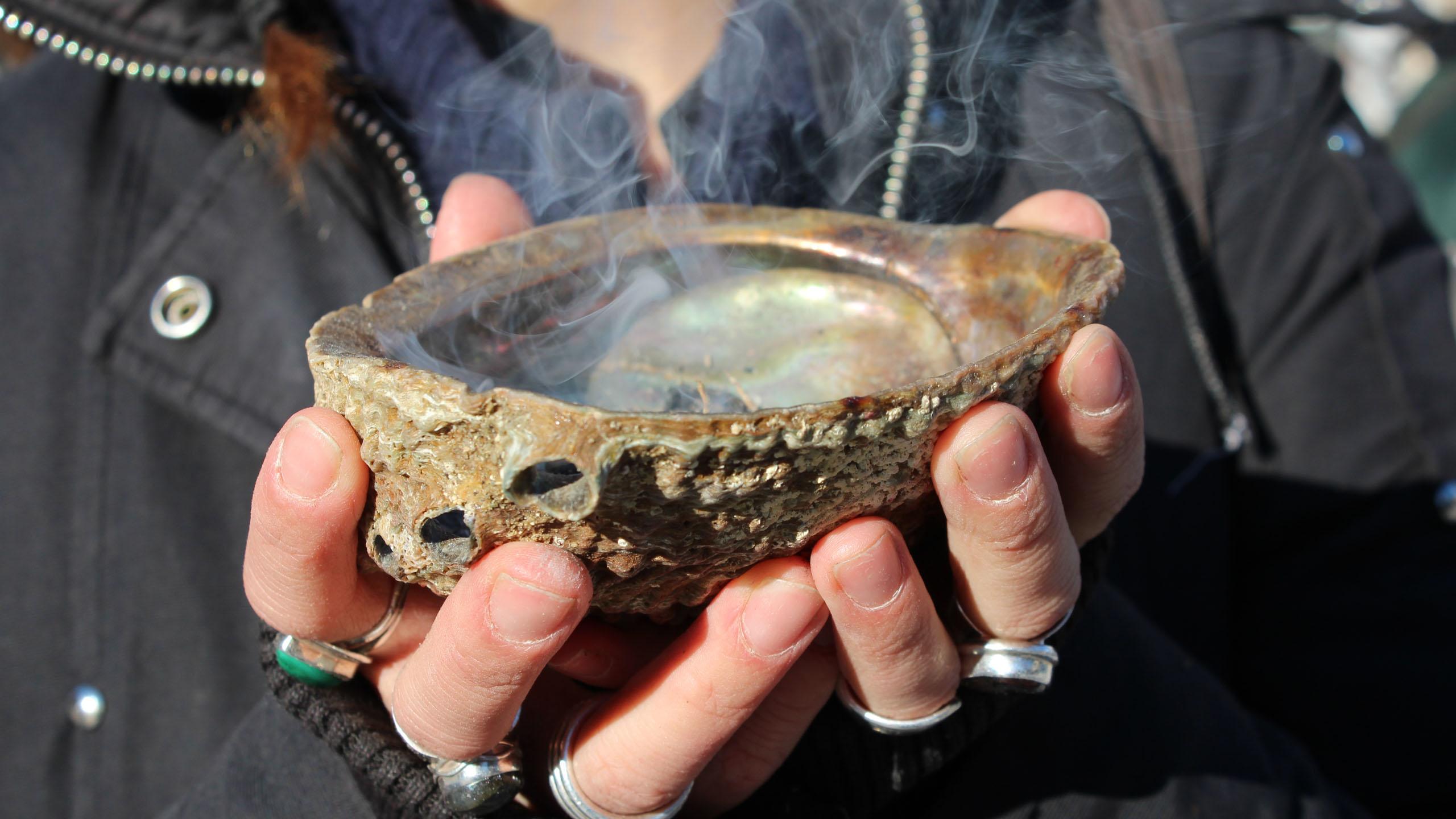 Allyson Pratt, a member of the Cree Nation in Alberta, smudged during the unity rally on March 3 at Nathan Phillips Square. Photo: Maggie Macintosh

Pratt said she was encouraged by the hundreds of people, both Indigenous and settler allies, who showed up to support the cause Saturday.

“It’s about unity and it’s about everyone coming together,” said Pratt, adding that she encourages people to continue to attend rallies and protests and to write letters to politicians to demand change.

Many Ryerson community members attended the rally to show their support.

Vee Dcrouz, a fourth-year child and youth care student at Ryerson, said she came to the rally because she supports the cause and believes Indigenous women deserve justice.

“Our justice system fails all people: people of colour and Indigenous people especially in Canada,” she said. “It’s great people are here showing their support.”

A couple of other students from Ryerson were also in attendance with six youth filmmakers from Nibinamik First Nation.

Nadeem Monenz and Lisette Lafarciola, both third-year child and youth care students, were with the six youth, including 22-year-old Natasha Sugarhead, before the premiere of their film “Finding Our Power Together”, which discussed youth suicide in their community. The film premiered at Ryerson on Saturday night.

“We’re here to support the story of Tina,” said Monenz.

Sugarhead said it felt “awesome” being in Toronto for the rally. As for the film screening, she said, “I’m looking forward to being heard.”