Ryerson’s bed bug problem may just be the beginning.

Last week, after The Eyeopener confirmed bed bugs were crawling around the Victoria Building and Ryerson steamed the classroom in question, more reports were made about bug sightings.

Last Wednesday—the night after Ryerson had reportedly cleared VIC205—an epidemiology class was taking place in LIB72 when a student looked down at her backpack, and saw a bug crawling around on it.

Jessica Kraft*, a first-year public health and safety student, knew what she was looking at.

“I’ve seen bed bugs before, so I recognized it immediately,” Kraft said. Her family has dealt with their tenent’s bed bug problems before. Kraft had read the reports about Ryerson bed bugs in the days prior, and knew she had to capture it to create proof.

“I killed it, [my professor] took pictures of it, and she used those to forward it to public health.”

According to Kraft, her professor, Jordan Tustin, was in contact with Toronto Public Health and Ryerson. 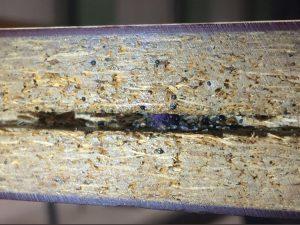 “I went to the student and visually confirmed it was a bed bug based on my previous experience as a certified public health inspector where the identification and inspection of bed bugs were part of my job responsibilities,” Tustin said over email.

Tustin asked Kraft for more information, such as where her bag had been all day, and helped her go through her bag before she left the class, which was cancelled.

Since Ryerson had rooms in the Victoria Building treated to kill bed bugs, the university has released a statement on their facilities management page listing classrooms in that building that were inspected and deemed clear. Not every classroom was included on the list, despite classes still taking place.

Ryerson said on Monday that the first three floors of the Victoria Building had all been steamed on the weekend as a precaution, and no update had been given on the status of the remaining floors.

There have also been reports of bed bugs in Kerr Hall East 222 and Sally Horsefall 652. Ryerson confirmed investigations into those rooms took place, although no further comment or statement has been released.

“I’m not part of Ryerson’s response in this matter, but from my understanding they are taking this matter seriously and following up on all reports,” Tustin said.

*Name has been changed to protect source’s identity.