Ryerson students are less than enthusiastic about the university’s proposal for an all-you-can-eat meal plan in the upcoming school year.

“Considering the menu is the same, I don’t think I would use it,” wrote first-year Muhammed Sameer Chandoo about the meal plan.

As announced on March 1, the university intends to offer resident students unlimited access to food – pending the proposal’s approval by the Board of Directors.

Meal plans are mandatory for all students who live in Residence at ILLC and Pitman Hall, with the light meal plan only offered to students living in Pitman Hall apartments.

“The prices are pretty high anyway”

“What we’ve heard from students is they want something that’s affordable, so price and value are very important,” Voula Cocolakis, executive director of University Business Services, said.

In spite of this, Cocolakis said the buffet-style plan will likely be more expensive than what currently exists.

“I think they should keep the same prices because the prices are pretty high anyway,” wrote Chandoo, who lives in the International Living/Learning Centre (ILLC).

To Chandoo, an all-you-can-eat meal plan is unappealing since he dislikes the food offered in residence.

“I’m glad Ram in the Rye accepts one card payments, as that is a place I eat from when there’s nothing good at the cafeteria, which is quite often,” the first-year wrote to The Eye, referring to Ryerson’s campus pub.

Students can upgrade their meal plan at anytime after their initial purchase. However, a decrease in one’s meal plan can only take place in the first two weeks of a semester. For many Ryerson students, too much time has passed before they realize their plan is too large.

“In my first year, I had so much extra money, like $200. It does carry over from the first semester into the second, but (at that time) not to the end of the year. So the only way to get around that was to buy something,” said Sara Gladney, a Ryerson graduate.

Gladney ended up purchasing the most expensive thing offered: a $50 case of water.

“My whole first year I remember, we were all like ‘Oh my god we didn’t buy the right meal plan, we are so stupid.’ Everyone was buying water.”

According to Gladney, the resident advisors (RA) were the ones who told students to buy sodas and water to get rid of the excess money in their accounts. The only other option was to—figuratively—eat the money very quickly. 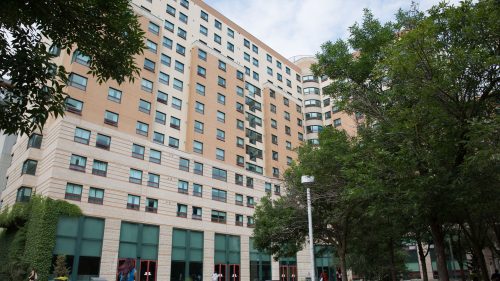 “When you’re in res, your exam period could be done in two days, or three days, or in two weeks. That’s where people don’t realize you’re forcing yourself to consume so much food in that last few weeks. So I have some great before and after pictures of the weight loss,” said the RTA alumna.

Gladney, who is a dual Canadian-American citizen, suggests the university should adopt a similar meal-plan system to that of American universities, where students can use a fund of money included in their meal plan at local businesses.

While Ryerson students do receive discounts to certain off-campus stores like Metro, they’re unable to use their OneCard to pay for food at local establishments.