Thirty minutes into the Ryerson Students’ Union (RSU) annual general meeting (AGM), and the student union president Susanne Nyaga announced that quorum was not met as only 71 students attended. All motions in the agenda were postponed.

Nyaga said that April AGMs don’t usually hit quorum because it’s a difficult time of the year. However, it was disheartening for her that quorum was quickly lost after reaching it during the November AGM. 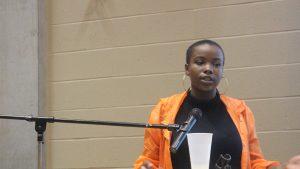 “There were a lot of motions that students put forward and eagerly wanted to discuss… but folks didn’t agree with the way the discussion was going,” she said. “Although there’s always motions on the table that I’ll disagree with I don’t think [walking out] is an effective way to have a conversation,” she added.

Incoming RSU president, Ram Ganesh, said he will focus on better marketing and outreach to avoid having SAGMs postponed. This winter’s AGM also lost quorum shortly after the meeting started.

“During the election, campaigns we assigned each director a target number of student groups they needed to go speak with to bring their membership out to vote,” said Ganesh “Student groups and course unions are impacted heavily impacted by the RSU…I’m going to try and do the same thing by empowering the directors to reach out to those groups again”.

In the case of emergent bylaw amendments, Ganesh said the RSU would call a “special general meeting.”

He says his team has nothing to do with the motion to increase #RSU exec pay by $11,000. Calls it a “terrible idea” and says people should vote it down. pic.twitter.com/7QbfzRE8xl

Nyaga said the audited financial statements will remain unapproved but hopes they’ll pass during the next SAGM. “It’s not smart for any organization to have unaudited financial reports for so long and is part of the reason I wanted quorum… It just puts the RSU in a very precarious situation,” she said.

Approval of the financial statements involves the membership approving the legitimacy of the documents and having space to ask questions about finances of the union.

After a land acknowledgement by vice-president equity, Camryn Harlick, Nyaga gave her welcoming remarks and thanked the audience for attending.

“We’ve faced a lot of challenges coming into this, the first and foremost is we had a split slate…We came in not knowing each other and not knowing how the rules worked,” said Nyaga. She said, following last year’s 1.1 million-dollar deficit, she tried to get students to trust the RSU again.

Despite that, Nyaga also said she is proud of the work her team did, noting the people who cared about students got work done, whereas others who cared more about drama got less work done. 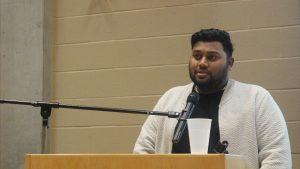 Nyaga finished by thanking the current executive team for the work they accomplished. She highlighted projects they’ve worked on which include the good food centre referendum, implementing the career development grant, motioning the U-Pass, bringing holocaust education week, opening the wellness centre and making the CopyRITE website more accessible.

Ganesh, who next gave his remarks as incoming president of the RSU, thanked everyone and said he hopes to deliver results and not excuses.

“We’ve promised on a lot of things and we hope to deliver on them… Students want a team that works together and performs to the best of their potential and that’s something we will do,” he said.

Ganesh said he is opposed to the motion to increase executive salaries and wants to vote it down in the BoD meeting. He also hopes to have constructive conversations in organized spaces with the Ryerson community, as opposed to “defaming” and “slandering” people online.

The current executive directors then gave brief reports of their duties. Daniel Lis, vice-president education, talked about the RSU motioning and campaigning to implement a subsidized public transit pass for students.

The U-Pass was passed by the TTC board,and will be brought up in the BoD meeting. If it’s approved by the board, the RSU will hold a public referendum voting it in September.

Lis said, the career development grant, a grant for students doing unpaid internships, also continued to run this semester after it was launched last semester. Last semester they received over 500 applications for the pilot project.

Earlier in the semester, the RSU ran a consultation on university budget and received 1000 responses, according to Lis. In those responses, students said they wanted cheaper food on campus, open educational resources, more scholarships, mental health services and study spaces. The results of the consultation were presented to Mohamed Lachemi and vice-president operations and administration, Deborah Brown.

Next, Harlick spoke about the implementation of all-gender housing in residences and in the RAC and hopes the process will soon extend to the Mattamy Athletic Centre. 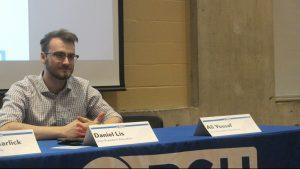 Harlick also detailed the referendum on the expansion of the good food centre and increased funding for the sexual assault support line as one of his successes this year.  He hopes the incoming executive team will work on implementing a sexual assault help centre.

Nyaga ended with her report detailing events and workshops held on campus, the opening of the wellness centre and launching the 24-hour study space pilot project as some of this year’s accomplishments.

Vice-president operations, Ali Yousaf, left after a brief appearance and did not debrief his executive report.