To many, this number will not hold much significance. But for a handful of Ryerson students, this number is extremely special.

Eighty-three is the number of Ryerson Rams games RTA students broadcasted in the control room of the Mattamy Athletic Centre last season, ranging from preseason action to the Ontario University Athletics (OUA) women’s volleyball championship tournament. For these students, the number 83 also represents countless hours of hard work that go into putting on the best student-run sports broadcast in all of Canada, even before the opening tip-off.

According to fourth-year Sport Media student and 2018-19 Broadcast Crew Leader, Adam Chorazyczewski, the process of preparing for every game is intense. Storylines need to be researched and planned, stats need to be gathered, graphics need to be made, cameras and audio equipment need to be checked and rundowns need to be created and reviewed.

“It’s a lot of pre-production work.” 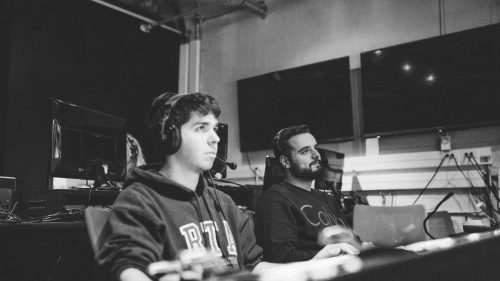 Prior to 2014, Rams Live was part of the Ryerson Rams Network, a project solely undertaken by the Rams athletic department. However, at the beginning of the 2015-2016 season, the program was revamped and later renamed to Rams Live, as the athletic department and RTA joined forces.

“We had ongoing conversations between RTA and Athletics prior to the university officially starting the Sport Media program,” explains Brian Withers, who, along with Shawn Haswell and labbies Scott O’Sullivan and Evan Rolfe make this opportunity possible. “But in the years leading up to this program launching, we recognized that live game production is a major component of the sport media industry. We thought that this would be a great opportunity to replicate the real world as best as we could, and give the students some opportunity to try their hand, experience it and determine if it was something they wanted to pursue.”

This past May, the first group of students to truly experience the magic and thrill of live sports production graduated as part of the inaugural sport media class. From their example, Rams Live improved year after year, receiving praise and recognition such as being given the title of Best Webcast Production by the OUA from 2014-17.

Today, Rams Live’s standard is so elite that it closely resembles the professional broadcasts found on major networks such as TSN, Sportsnet or CBC. In fact, many recent graduates of RTA and Rams Live have worked for the three aforementioned networks on live broadcasts, such as play by play broadcasters Jaime Hills and Victor Findlay, as well as Font Coordinator Keerthika Uthayakumar. 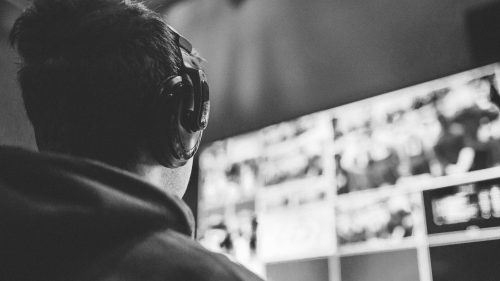 “I honestly don’t know where I would be if Rams Live wasn’t available to me in my second year,” says Uthayakumar who has worked for every sports network in Canada, as well as Maple Leaf Sports & Entertainment (MLSE). “It was such an incredible learning opportunity; I can honestly say that I learned something new every shift. The technical skills we’re exposed to, in addition to the production skills definitely set me up for success.”

“I’m obviously quite happy, and quite proud and feel very good about it when I see students that have come through the Rams Live initiative and dedicated their time, and really worked on developing those live production skills sets,” says Withers. “ I think it speaks volumes to the effectiveness of the Rams Live program.”

Quite frankly, Rams Live has been so successful each year because of the dedication displayed by a countless number of RTA students, some paid and some volunteer, who are part of the crew. Depending on the week, game and opponent, there are some instances where upwards of 20 unpaid volunteers are working, many of which are regulars.

Tash Cyrille, a broadcast crew leader this season for the first time, was one of these regulars the past three years. As a volunteer Rams volleyball colour analyst, Cyrille dedicated 320 hours to Rams Live.

Not to be forgotten is the Broadcast Crew Leaders themselves who are responsible for the most important roles, including positions such as director, producer, technical director, iso producer and font coordinator. This is in addition to guiding and giving feedback to the volunteers, who in some cases may be inexperienced.

According to Withers, the Rams Live mantra is “Never Just on the Broadcast Standards.” To Withers and the rest of the Rams Live Crew, this means making sure that the volunteer experience is equal to, or better than the broadcast quality. At the end of the day, the purpose of the program is about learning and gaining experience.

A sentiment that is echoed by Cyrille who said, “Rams Live is a lot more than just about honing your skills, it helps you build some networks with professors and other students.”

With the Rams season kicking off this past weekend, so too did the Rams Live broadcast which went live and faded to black for the first time. This trend will continue every week until March when Rams Live signs off for the year, only after broadcasting the gold medal game of U SPORTS Women’s Basketball Championship.

Until then, you can watch your Ryerson Rams on the country’s best webcast, Rams Live here, or, if you’re feeling adventurous and wonder how a live broadcast works from behind the scenes, you could always volunteer.