You would never see blue and gold on the same sweater under normal circumstances at BMO Field.

On Oct. 12, the clashing colours of competing rivals Toronto Argonauts and Hamilton Tiger-Cats were sported by hundreds of Ryerson students for an unconventional homecoming celebration. 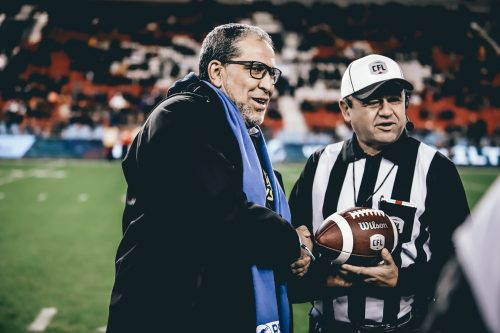 Ryerson President Mohamed Lachemi (pictured on the left) poses for a photo with a referee. Photo: Hung Le

The initiative, organized by Ryerson student and MLSE employee Syed Abbas in conjunction with the Ryerson Students’ Union, saw the Canadian Football League’s (CFL) Toronto Argonauts representing Ryerson. The university does not have a field a U SPORTS football program. As fans packed into the stadium’s scenic Gate five, the typical rowdy shouts of “Argos” were matched by a twinge of irony in “Go Rams.”

Despite the cold mist of the evening, Ryerson students kept up their chants as the Argonauts took to the field. With a deadlocked 10-10 score after the first quarter, the students were in good spirits.

“The reason why I came tonight is because I wanted to be a part of a Ryerson activity,” second-year sport media student Jamison Schulz-Franco said. “There’s homecomings at other schools, and my outlook on it is that it has to start somewhere.”

Eventually, cracks began to form in the Argonauts defence as well as the homecoming spirit. Attending fans questioned the team’s disjointed representation of their school.

“Personally, I think Ryerson was trying too hard to do something,” Monika Zerbe, a second-year professional communications student, said.

First-year biology student Bryan Schubert was happy with the turnout and the atmosphere, but felt something was missing without the Ryerson Rams. “I don’t think it’s too bad, but I would’ve preferred to see a Ryerson team play.”

The Argos went into halftime with the game in reach, trailing the Tiger-Cats just 10-18. While the score was close, Ryerson students began to file out of the match at halftime. Those leaving the game cited the cold temperatures, increasing rain and disconnection from the match. 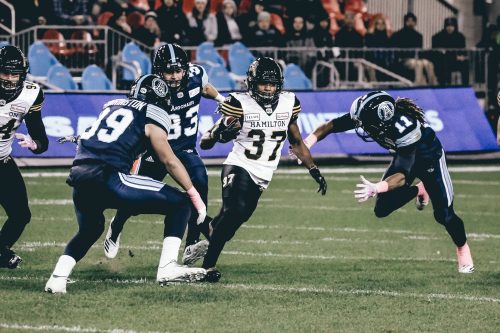 Frankie Williams (pictured in the middle) of the Tiger-Cats, evades some Argonaut defenders on his way to a decent return. Photo: Hung Le

It was not the end of Ryerson’s representation, though. Eggy joined two Ryerson students to centre field, where they would attempt field goals to cover the cost of their tuition. Ryerson Masters of Journalism alumni and CFL on TSN reporter Matt Scianitti sported his signature Chuck Taylors in blue and gold with an ‘I Am Ryerson’ hoodie. Unfortunately, only a handful of students remained to witness these.

Ultimately, the first Ryerson homecoming with the Argonauts was met with a mixed reception. Students appreciated the grandiosity and gesture of the event, but feelings of alienation permeated the festivities. It is uncertain what the future holds for the homecoming football game. Event organizers were unable to be reached for comment.

Carrying the torch for Ryerson, the Toronto Argonauts eventually lost 20-34.