Some know him as Gerry Duncan on the hit TV show Mr. D but on Nov. 16, he was “Coach D” to the Ryerson Rams men’s hockey team.

A comedian and television personality by trade, Gerry Dee ran the team’s practice, helping out Rams head coach and close friend Johnny Duco for the day.

“I’ve kept in touch with a lot of the players I coached over the many years I did minor hockey in [Junior A],” Dee said. “[One day], I was joking around with [Duco] and he said, ‘why don’t you come run a practice?’ and he knew I could run the drills sufficiently.”

From start to finish, Dee was clear and strong with his messages, getting the team to warm up before getting into the details of the practice.

Despite his comedic chops, Dee wasn’t anything like the man most of the players saw on their television screens. Instead, he was up to par and visually interested, running a serious and safe practice of nearly two hours.

Throughout the practice, screams of “Go!” and “Move!” came from Dee, who truly looked like he was in his element once again. Coming in, some of the players were also surprised at Dee’s intensity and knowledge.

“Some of the guys said that they though he was going to scribble all over the board for the first drill,” Rams goalie Taylor Dupuis said. “Right after he explained the first one, guys were like, ‘oh shit, this guy actually knows his stuff.’”

It might’ve caught the players off guard, but for Duco, it was exactly how he expected it to be.

“Well, that’s what I remember,” Duco said. “For me, that was the Gerry I knew. The coach, the teacher…and obviously he was [always] serious because [he] was in a mentorship role.” 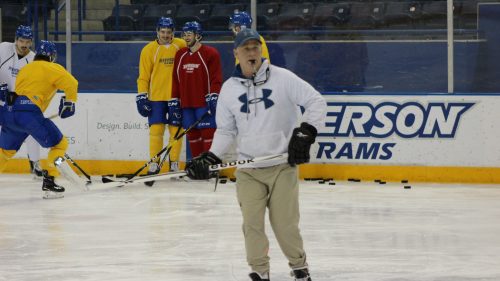 While there were some laughs to be had from the seasoned comedian, Dee ran a tight ship for the Rams practice. Photo: Peter Ash

Before his career in television, Dee was a hockey player. His playing career brought him as far as the then-Canadian Interuniversity Athletic Union (CIAU), now U SPORTS level, when he played for the St. Francis Xavier X-Men from 1992-93.

Later on, he became a teacher at De La Salle College, or the “Oaklands” in Toronto. During that time, he also coached minor hockey in the Greater Toronto Hockey League (GTHL) before coaching the Junior A Wexford Raiders.

Dee has been no stranger to sports since his successful foray into comedy. The coach-turned-comedian combined his passions in a running segment on The Score Television Network (now Sportsnet 360) titled Gerry Dee: Sports Reporter.

“He later got into the stand-up comedy and decided to go that route,” Duco said. “But he was a great coach.”

“I value their ice time. I didn’t want them to come out in here and go, ‘what a waste’”

Dee also used to coach Duco when the Rams coach was a minor, which is how the two formed a relationship that’s lasted for over 20 years. When asked about why this wasn’t a more relaxed practice, Dee said that in reality, the serious coach was “probably the real [him].”

“This is an important job for a lot of these kids and [a lot] of them are going to go on and play [pro],” Dee said. “I didn’t want to come and make light of their practice time too much, and I didn’t.”

To conclude the practice, Dee and Duco came together to give the team multiple four-on-four scrimmages. After it was done, he was given a round of applause, which put a solid grin on his face.

“Maybe they wanted more joking, but…I value their ice time. I didn’t want them to come out in here and go, ‘what a waste.’”